3 Teams Separated by 2 points; Murdock and Sansing Duel it Out!

What a way to begin the Divisional Championships! With 8 teams ranked in the top 10 of NH, the chase for the Division 1 title looked to be close.  It did not disappoint, with it being decided by a tiebreaker, and a 3rd team just 2 points back.  Favored Concord, led by Cassie Shea’s overall 4th place finish, ran a superb team race consistent with their season placing 5 in the top 25.  However, it was Bishop Guertin who seemed to have an answer for Concord throughout the race, placing 5 runners in the top 21 and the all important 6th, senior

Gabby Richardson, place 29th, taking the title on the tiebreak. 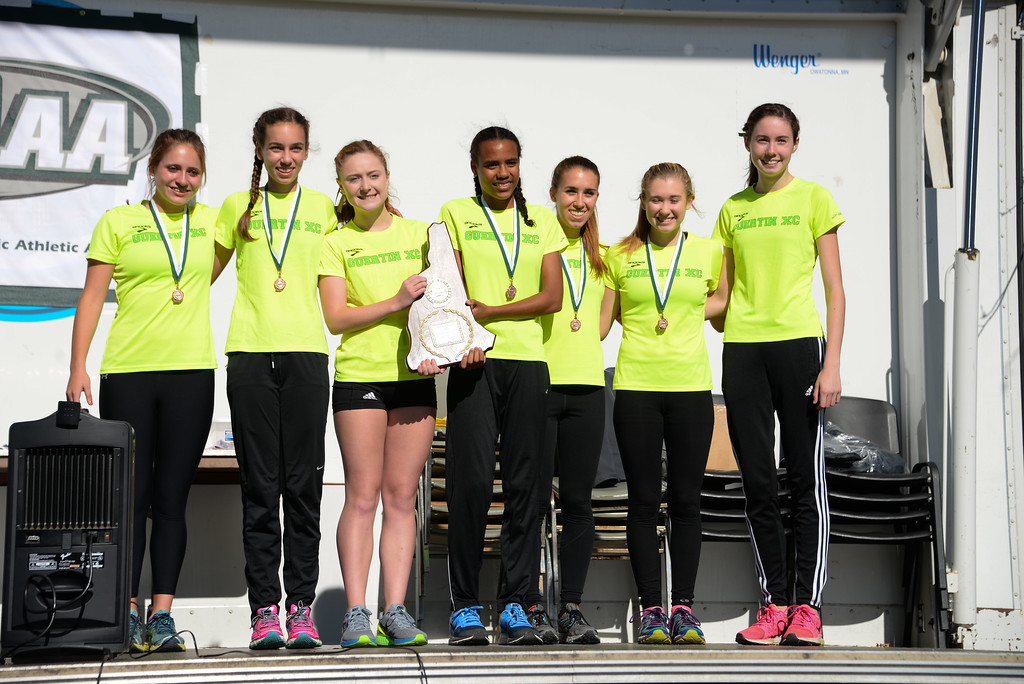 MANCHESTER, NH – On a beautiful late October day at Derryfield Park, the Pinkerton Academy Astros (NH #1) secured their second consecutive Boys Division 1 Championship. While Timberlane’s Liam Kimball pulled away from Central’s Abram Gagnon in the last 200 meters to capture the individual title in 15:58.4.

Led by their two outstanding juniors Nick Sevilla and Tom Hanlon, Pinkerton left no doubt about who the best team in Division 1 is by rolling to a 44 point victory over runner-up Timberlane (NH #2).  Sevilla and Hanlon finished 4th and 7th respectively, and their teammates were not far behind.  Seniors Owen Clark, Austin Smith, and junior Sam Laternier (2014 Division 1 JV Individual Champion) rounded out the scoring for the Long Red Line with all three finishing in the top 20.  Led by Kimball, Timberlane put their first three runners in the top 20 to hold off Alvirne (NH #6).  After Alvirne, Concord (NH #7) grabbed fourth, Manchester Central (NH #8) surprised some placing fifth, Nashua South placed sixth, Nashua North finished seventh, and Londonderry (NH #5) rounded out the Meet of Champions qualifiers in eighth.

While the favorites in the team race became clear early on, the individual title would not be settled until the home stretch.  At the mile mark, a tightly bunched pack scampered up into the woods of Derryfield.  The rolling second mile culminating with the ascent of McIntyre would thin out the lead pack considerably as Bedford’s Scott Daly, Manchester Central’s Abram Gagnon, and Liam Kimball of Timberlane pulled away from the field.  Daly led both Gagnon and Kimball heading down towards the door, but coming back across the field Kimball and Gagnon pulled in front and headed into the final stretch neck and neck.  Kimball pulled away to take the title in 15:58.4.  Second place went to Gagnon in 16:08.5.  Scott Daly finished third in 16:11.3, and Pinkerton’s Sevilla and Manchester Memorial’s Brett Hoerner rounded out the top five finishing in 16:17.1 and 16:19.1 respectively. As predicted, figuring out which team and which athletes will rise to the top is a tricky proposition. In the preview we stated that a full Mascenic squad would be difficult to beat, and if there was to be an upset it would likely come from Derryfield or InterLakes.  An upset didn’t happen, but only by the thinnest of margins.

Noticeably absent from the Mascenic line up was Tim Fafard, last year’s D3 champion and runner up at Meet of Champions. Missing school by being sick, Fafard was ineligible to race, which opened the field significantly.  Losing one of your top five is tough, but losing the State’s proverbial #1 is usually the nail in the coffin.  Fafard’s absence opened the door for a handful of teams and definitely changed the race upfront.

From the gun, Cam Daly (InterLakes) and Dom Repucci (Hopkinton) took the race out strong, with a large number of runners out quick and right on their heels. The Mascenic squad appeared buried at the top of the starting hill with Avery Traffie leading the crew in about 20th and around 30 places back to their #2 and #3.  Not looking good for the boys that have spent the season ranked as the state’s number 10 team.

Cam and Dom led through the mile and at the top of the reservoir hill as well, with Cody Symonds of Prospect Mountain trying to keep contact.

Then came a pack of runners that included James Elmour of Monadnock, Sam Richmond and Patrick Finocchario of Derryfield, Trevor Colby of InterLakes, Warren Barlett of Bishop Brady, Ryan LaFrance of Gilford and Traffie.  Having made up significant ground during the first mile, Mascenic’s Jackson Whitehouse and Jake Movsessian were not far behind with Mike Roffo and Ben Garfield of Derryfield giving chase.  It was going to be a shoot out.

As they came off the hill and crossed the tennis courts parking lot, Cam Daly had opened a 40 meter gap on Repucci which he would only increase over the final 800 meters. Dom would hold his position over a hard charging Traffie who had created a gap coming down the hill. Cody Symonds was trying to hold off Elmour and Whitehouse eventually keeping Whitehouse in the rear view mirror.  Finocchario, Colby, LaFrance and Movsessian rounded out the top ten.

As the bodies piled up in the chute, it appeared that it would be close between Mascenic and Derryfield, with InterLakes close on their heels. Mascenic had some low sticks and four in the top twenty but Derryfield had four in the top 15 and their fifth finished 28th.

In the end, it was a tie between the two teams, 76 – 76, with Mascenic winning on their 6th man.  InterLakes kept it close with 86, with Monadnock (130) and Prospect Mountain (160) rounding out the top 5 teams moving on to the Meet of Champions. In the preview, we tapped Monadnock, White Mountains, Bow and Hopkinton to be the favorites, with Fall Mountain as the wild card based on the fact they haven’t run at full strength and the Gardner sisters are the best one-two punch in Division 3. And as it would turn out, those five teams would make up the top five.  As for individually, we called for a battle between Casey Hecox of Derryfield, Faith and Hope Gardner, and Maddie Clark and defending champ Sarah Nadeau of Hopkinton.  This held true as well.

This race was hot from the gun as well with Hecox, the Gardners, Clark and Nadeau, and a White Mountains crew led by Jessica Schanlaber and Alex Curtis in the mix as they led back down the first hill and towards the gazebo. This grouping held true through the mile and at the top of reservoir hill, Clark and Nadeau led, followed by Hecox and the Gardners.  Who had worked hard the first mile and who had something in reserve for the second half?  We would soon find out who played their cards right.

Leading into the final 100 meters was Casey Hecox, who had built up a solid lead over Hope Gardner who led her sister Faith. Running strong, this is how it would finish, with Sarah Nadeau beating Maddie Clark over the final 800 meters.  There was a gap back to 6th, however the next three were from White Mountains, with Alex Curtis leading Kaitlyn Nelson and Jessica Schanlaber in.  Rounding out the top ten were Kayla Blair of Monadnock and Danielle Scott of Fall Mountain.

In the race for team champion, White Mountains ran well as a pack taking those three of the top ten spots, but were aided by an 11th and 13th place finish, winning with 45 points. Next in was Monadnock with 86 points.  Bow (141), Fall Mountain (150), and Hopkinton (166) rounded out the top five moving on to Meet of Champions.

The  Coe-Brown Lady Bears pushed their streak to 5 Division 2 titles, sixth in program history.  Placing 6 runners in the top 10 and 7 in the top 13, CBNA tallied one of the lowest winning scores in NH history with 22 points.

Entering the meet, the big question was who would be on the podium and who would be the qualifying teams of Meet of Champions.  Souhegan has been a solid, consistently ranked top 10 team, while Oyster River hadn’t had the opportunity to race their team at full strength, that is until Saturday. With Maegan Doody winning the individual title, Oyster River was able to capitalize on the lowest number to edge Souhegan 83-92 for the runner-up plaque.  The Lady Sabers led by Madeline Hunt’s impressive 5th place showing, placed 5 in the top 31 while the Lady Bobcats surprised many by placing 3 in the top 12 and 5 in the top 33.  Perennial power Hanover, placed 4th.

Also qualifying for Meet of Champions as a team, for the first time in school history, was Windham and last year’s runner-up Hollis/Brookline.

Individually, Doody, who placed 3rd last year, claimed her 1st D2 cross country individual title.  Through the first mile and up Reservoir Hill, Doody, flanked by Coe-Brown’s Hannah Parker and Elisabeth Danis, led the field with CBNA’s Alli Pratt in tow.  Over the second mile, Doody opened up a small gap over Parker, with Danis 3rd but looking relatively strong. Off the hills, and on the lower loop Doody kept the lead to win in 18:21, with Danis taking over 2nd in 18:34 and Parker striding to 3rd in 19:06.  Behind them, Pratt was closing in on Parker for 4th in 19:09.  Souhegan’s Hunt held off CBNA’s Julia Cormier and senior Katie Scannell for 5th.  Rounding out the top 10 were freshman Danielle Slavin, Oyster River, Sarah Crampton, Hollis/Brookline, and CBNA’s Brooke Laskowsky. In the final race of the day, Coe-Brown Northwood Academy employed pack running, illustrated by their 36 second 5-man spread, Placing 2 in the top 10 and 3 in the top 20, Goffstown was a surprise runner-up team.  Another surprise was Portsmouth, who lost their third man to injury, placed 3rd.  What was to be an exciting team showdown between CBNA and Oyster River got derailed when OR’s #1 Patrick O’Brien was forced to drop near the 2 mile mark.  To their credit however, the Bobcats held strong to qualify for Meet of Champions by virtue of their 4th place finish.  Windham 5th and Lebanon 6th were the remaining 2 teams to qualify for Meet of Champions. Cross country was in full swing at the NH-XC Festival on August 23rd at Derryfield Park.  The race was a production of […]