The 2015 Nashua North-South Invitational will be bringing togethe

r 4 of the top 10 girls’ teams in the state in a fast early season test. Pinkerton Academy (NH #4) will be trying to take the win away from defending champion Concord (NH #6).   Pinkerton has one of the best 1-2 punches in the state with Morgan Sansing (defending champion) and Ariel Vaillancourt.  They will be tough to beat up front; however, it takes 5, so it will all come down to how their 3-4-5 come in. Concord has a strong front runner with Cassie Shea (2014 runner-up), then their next runners will be battling with Pinkerton’s to see who will come out on top.

Merrimack (NH#7) and Bedford (NH#10) have yet to show their true strength so far this fall, so they are very unpredictable. Merrimack has a group of young returners from last year’s squad and Bedford graduated several, but there is rumor they got a strong transfer student. This will make for an interesting race.

Individually, Sansing (PA) should repeat but look for Concord’s Shea to be right on her shoulder.   Those two will probably be alone up front, but then there should be a large pack of strong Division 1 runners battling for the top 10. Alvirne has a strong duo in Shalyn Saunders and Kate Bellomo as well as Merrimack with Bailey Carillo and Sarah House. Vaillancourt (PA), Jennika Mannesto and Laura Braley (Concord) and Courtney Guay (Londonderry) are among the top 10 returnees from last year’s race and will be fighting for the top 10 again this year.

On Saturday, several of the top boys teams in New Hampshire will 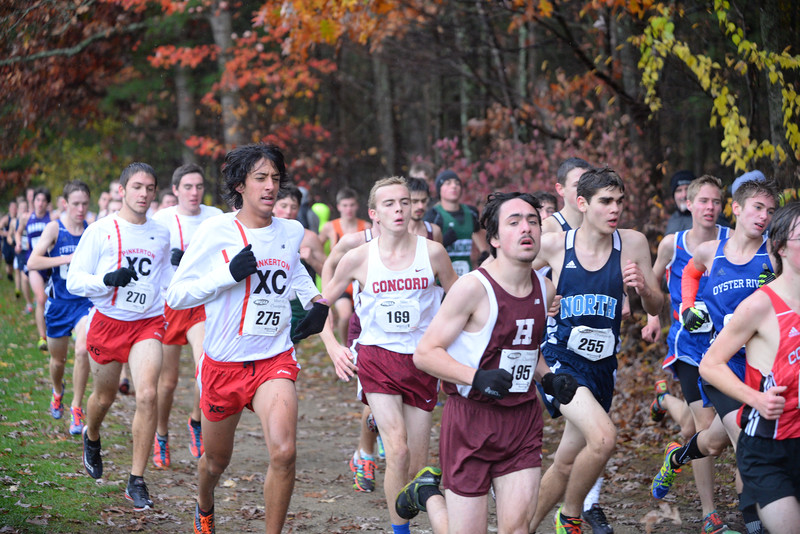 take to the Meet of Champions course at Mines Falls for the 5th Annual Nashua North-South Invitational. Five teams ranked in the top ten will compete in this high powered early season meet. With a win at Mt. Washington already under their belt, Pinkerton (NH #1) is the favorite in the team competition. While the battle for individual honors should be heated.

Last week, Pinkerton asserted their dominance and showed the cross country world why they are the top ranked team in the state when they put their first seven runners in the top ten. Led by the formidable trio of Tom Hanlon, Nick Sevilla, and Patrick Bastek, Pinkerton easily distanced themselves from the field with a low score of 38. This race will be much closer as Londonderry (NH #2) and Concord (NH #4) will look to challenge the Astros. This past Saturday the Lancers beat a strong field at the Souhegan Relays. Using their great depth, the three Londonderry relay teams finished 1st, 3rd, and 5th to win the team title with just nine points. Concord will look t

o its senior standout Alex Saveliev to help propel them to the top of the team standings.

In the battle for top individual honors, there are several athletes who will enter the race believing they can win. The Alvirne duo of Kendall Westoff and Noah Bellomo figure to be at the front of the pack. Pinkerton should also be well represented with Hanlon, Sevilla, Bastek, and Jeff Reddy all capable of putting together outstanding races. Concord’s Saveliev boasts the top time of anyone in the field on the Mines Falls course from last season and will certainly be a contender this weekend. Londonderry’s Cam Dickson and Nashua North’s David Vorbach have also had strong starts to their seasons. This Saturday, Alvirne High School will host the 12th edition of the “Battle of the Border” with 18 schools (9 from Mass., […]