This Friday, the 34th “Jeri Blair” Invitational will pit many of the

Division 3 contenders against each other in a preview matchup of the D3 meet coming on all Hallow’s eve. Toss in some strong competition from a handful of Division 2 teams and you get a no holds barred throw down on one of the toughest courses in New Hampshire. The 5142 meter course with a long undulating uphill just before the half way mark and again 1000 meters from the finish, makes for a good pre-Derryfield warmup a couple weeks out.

Last year’s girls’ winning team was the ladies from John Stark, packing five runners in the top 25. However with the loss of three seniors, the Lady Generals will have their hands full on Friday. Hollis-Brookline was the runner-up. While White Mountains finished third at Belmont, the Lady Spartans put it all together and won the Division 3 championship in a rout. Another team not to sleep on would be the Merrimack Valley girls. With Kristie Schoffield up front, this team should not be overlooked. 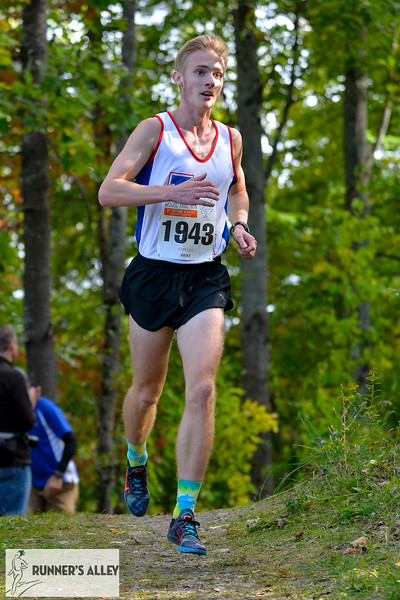 In the boys’ side, we should hopefully see some hot action up front. Last year Cam Daly and InterLakes opted to race in the Thetford Trail Run, which took place the day after Belmont last year. With Thetford out of the way, we hopefully will see Cam and the boys running the trails in Belmont. This then pits last year’s top three in Division 3 (Daly, Dom Repucci of Hopkinton and Avery Traffie of Mascenic) against each other this Friday and if so, the sparks should fly. They will be joined by Gilford’s Ryan LaFrance, H-B’s Cam Jackson, Mascenic’s Jake Movsessian, Dane Seppala of Conant and Tim Cunningham of Kearsarge.

In the team race, Mascenic is the defending champion and come into the meet running well. But losing five seniors from the roster and replacing them with some very talented but very green freshman, could make repeating as champs difficult. The squad from Hopkinton is very improved and finished a scant 14 points behind the Vikings a few days ago. Also don’t sleep on H-B or Kearsarge. The boys from Kearsarge are also much improved and are looking to shake things up come divisionals and the Cavaliers finished third here last year.