All results from today’s Middle School State Championship meets are found at LancerTiming! For the first time in its 43 year history, the NH Middle School Championships were held at two different venues. The ever increasing popularity of cross country was a factor that helped force the hand of change.  Another was to divide teams into three more equitable divisions based on school population.  Londonderry hosted the (Large) Division I and (Medium) Division II, while Coe-Brown hosted the (Small) Division III.

At Coe-Brown, it was all about hometown domination.  As predicted, the Division III Girls race was a runaway victory by Northwood’s Addison Cox.  The talented 8th grader scorched the two mile course in a course record time of 11:41 to become the first ever 3-Time NH Middle School State Champion.  Andover’s Sophia Reynolds ran strong to the finish to place 2nd in 12:21, just ahead of Portsmouth Christian’s Liza Corso (12:22) and a pair of Hopkinton teammates Anna O’Reilly (12:22) and Cailey Stockwell (12:26).  Mariesa Preble of Hampstead placed 6th in 12:32, Gilford’s Cat Stow placed 7th in 12:36, Hopkinton’s Lilia Klinger was 8th in 12:37, Portsmouth Christian’s Lily Kjendal 9th in 12:38 and Deerfield’s 6th grader Sophie Hopkins finished 10th in 12:38. They won the team competition by placing four runners in the scoring top 10 and their fifth in 22nd place to tally a team low of 42 points.  The young and talented Deerfield squad placed second with 89 points just ahead of crosstown foe Northwood’s 143 points. Newmarket placed 4th with 153 points and Hampstead was 5th with 185 points. Portsmouth’s Angela Hagstrom got out to an

early lead and put it on cruise control to win the Division II Girls individual championship in 12:47.  Monadnock’s Delaney Swanson won the battle for second in 13:01 just ahead of Oyster River’s Sophie Sullivan (3rd 13:03).  The very talented twosome from Amherst were next with Masho Primmer (4th 13:07) and Chloe Trudel (5th 13:08) distancing themselves from Litchfield’s Cassie Hemming (6th 13:14).  Milford’s Abigail Halloran 7th finished in front of the pair from Pelham Rose Goyette 8th 13:30 and Paige Hurst 9th 13:36. Merrimack Valley 6th grader Sophia Rubenciuc grabbed the tenth place medal in 13:38 just in front of what looked like an army of Amherst runners. 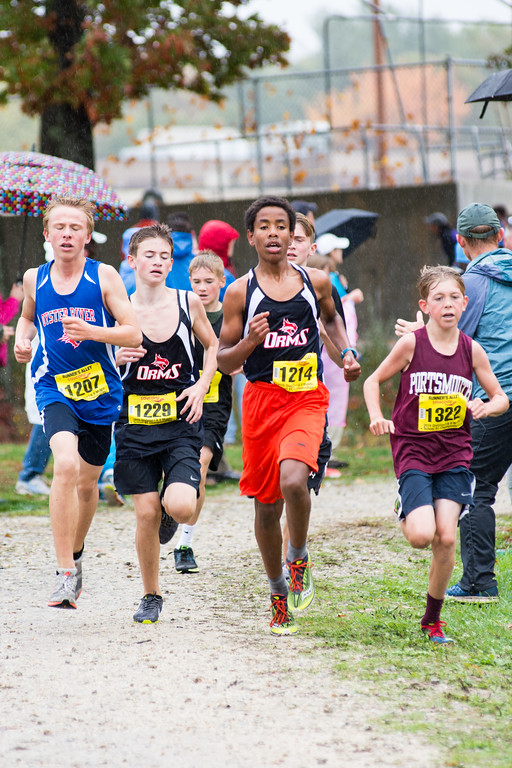 Sanborn’s Dylan Khalil turned in a very fine performance comfortably distancing himself to win the Division II title in 11:18 over a trio made up of archrival Oyster River harriers led by Owen Fleischer (2nd 11:35), Amani Harvey (3rd 11:37) and Andy O’Brien (4th 11:38).  Hanover’s Richard Aman (5th 11:40) slipped by Portsmouth’s Avery Crowell (6th 11:41).  Dylan’s younger brother Jared Khalil of Sanborn did well for himself also by placing 7th in 11:49 ahead of Monadnock’s Harry Ryan (8th 11:53), Milford’s Caleb Korthals was 9th and Monadnock’s Tyler Hebert rounded out the top ten in 12:00.

As expected, the depth of Oyster River’s #1-7 runners was overwhelming for its DII opponents.  They scored a paltry 34 points to win the 2016 Division II Championship, their first title since 1996.  Hanover placed second with 86 points with most of its team intact for a 2017 run at a title.  Led by its sensational siblings, Sanborn took a reputable 3rd with 119 points ahead of Monadnock with 136 points and Amherst was with 166 points.

There is a reason why they are called Hillside, because yet again they are King of the Hill!  Successfully defending their 2015 State Title and winning by a margin of 40 points, yet led by only one top ten finisher.  Hillside scored a workman like 71 points earning that triumph over a solid second place finish turned in by Rundlett 111 points.  Seacoast Champion Cooperative Middle School snatched 3rd with 126 points over pre-race favorite McLaughlin 4th (131 points) and Woodbury finished 5th with a 155 points.

The lowest team total (26 points) on the day and the largest margin (70 points) of victory went to Londonderry.  Keene placed second with 96 points better than Rundlett’s 122 points. Dover ran to a fine 4th place finish with 152 points and Elm Street seized 5th with 166 only 2 points ahead of 6th place Ross A. Lurgio.