Visit our MI43 Meet Hub as our center for everything Manchester Invitational over the past several years!!!  We have race videos, interviews, articles, photos!  It will also be THE place for this year’s NHCC.com’s coverage!!!

Over the last 2 years, the small school girls’ race has alternated victors between Greely, Maine and Hanover, NH.  While Greely won in 2014 and 2016, Hanover took the title in 2015.  Well, with Greely not attending this year, it would appear Hanover (NH-8) would be in the driver’s seat, right?  Well, this is Manch Invite, so it won’t be so easy. With NH #6 Coe-Brown competing in the small school division this year along with Rhode Island’s #5 ranked team in South Kingstown, Maine’s #8 in Fryeburg, and Vermont’s #6 and 7 teams in Brattleboro and Harwood.  While South Kingstown has defending champ Eleanor Lawler, Coe-Brown is coming off a very strong performance at the Cofrin Classic.  Will the NH school, led by a freshman have the advantage over a Rhode Island school, or will Hanover, with a very experienced pack come through to win for the 2nd time in 3 years?

Individually, one has to pick defending champ Lawler, the only returner in the 18’s, who placed 4th in last year’s New England Championships.  But don’t rule out Erin Magill (Harwood, VT), or Danielle Slavin (Oyster River). As always, look for a newcomer like freshman Addison Cox (Coe-Brown), who won this year’s Cofrin Classic to also make her presence felt.

With Oyster River (NH #3) matriculating, if you will, to the Large School Race, the small school division seems to be wide open.  The highest ranked school in their respective state is Barrington of Rhode Island.  Led by Eliot Laidlaw, Barrington is ranked 3rd in RI. Harwood, VT is ranked 6th in their state, and Coe-Brown is ranked 7th in NH.  Coe-Brown is the most intriguing from our perspective as they seemingly graduated everyone besides senior Evan Tanguay.  According to their performance at the Cofrin Classic, they have 2 freshmen and 2 sophomores on their varsity top 7. Only Tanguay has extensive varsity experience.  However, the two freshmen Luke Tkaczyk and Wyatt Mackey, both are surprisingly battle -tested as they were part of the the small school state middle school champs, Nothwood in 2016.

Individually, it will come down Tanguay, Laidlaw, Campbell’s Jeffrey Allen and Pelham’s Cameron Starr.  If healthy, the favorite has to be Starr.  Aside from OR’s Patrick O’Brien, Starr was NH Division 2’s most dominant performer in 2016.  If Allen can hang until the end, he may have the most blistering kick in NH.  Tanguay, who brought Division 1 stud Forest Mackenzie (Concord) to the brink a couple weeks ago, should factor in the mix as well.

Can you say Vermont v. NH in this one??  With 12 state ranked teams, and all of them from Vermont and NH, how can you label this as anything else?  And if you do agree, we guess one would have to select Vermont #1 (Northeast’s #5), Champlain Valley as the slight favorite over NH’s #1 Pinkerton.  Led by Ella Whitman, last week’s 4 point win, certainly gives CVU the edge, essentially came down to a battle between each team’s 2nd and 3rd runners.  CVU won that battle, but that was over a flat course.  Who will reign supreme on NH’s most storied course??  We also can’t rule out Merrimack (NH #5), which was within twenty points o

If this is not competitive enough for you, look at the fact that both state’s top 5 teams are all competing in the same race!  NH’s #2 Bishop Guertin looks to be running their full squad for the first time this season, while defending NH State Champion Souhegan (NH #4) eases into the season coming off a great win at Bobcat last week. Look for this year’s upstart Oyster River (NH #8)to make some noise as well!  Compare this to Vermont sending not only CVU, but great programs from Essex (VT#3), Burlington (VT#2), Mt. Mansfield (VT#4) and St. Johnsbury (VT #5).

Individually, obviously All-American Jackie Gaughan (Exeter) is the runaway (pun intended) favorite.  The real question is the Rebecca Durham (Milford) v. Julia Robitaille (West).  Who will be the favorite coming out of MI43 to win the D2 title in October??  Both have been simply dominant in the early season!  What if BG’s Caroline Fischer making her season debut, this could be a MOC preview!

Alright, buckle your seat belts cross country fans, because this year’s large school race boasts 18 teams that are ranked in the top 10 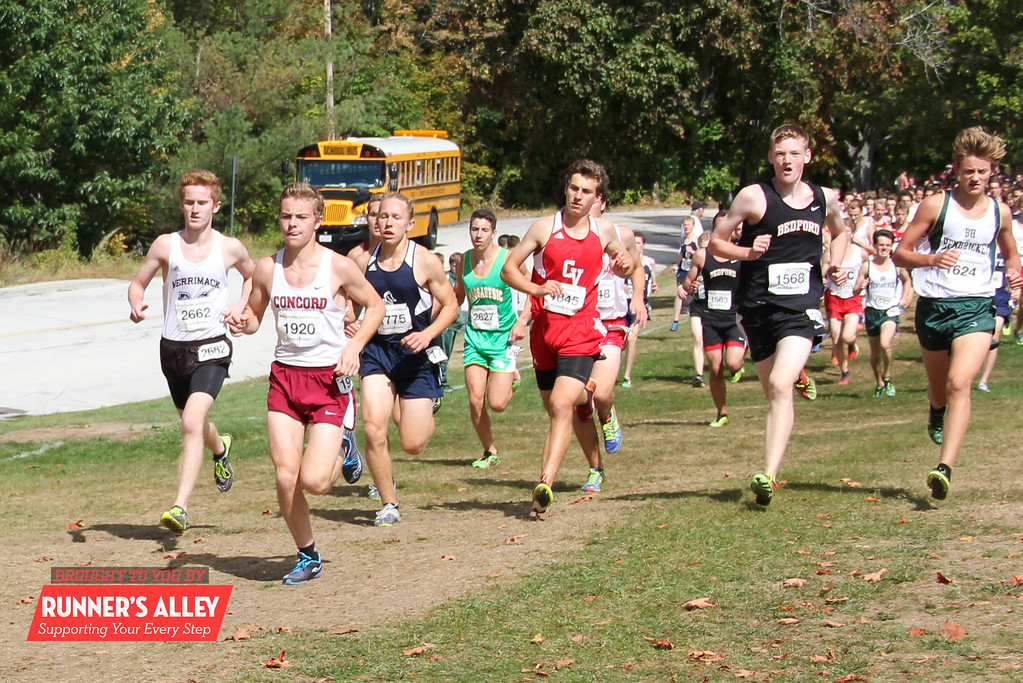 of their respective states.  From outside of NH, 1 team is ranked in the preseason Northeast top 5 and 2 more were on the ‘Watch List’.  This is a great early season test for NH #1 Concord to measure themselves against some of the best in the Northeast.  Last week, Concord asserted themselves as the top team in the Granite State by comfortably winning the Nashua North-South Invitational over three of the best Division 1 has to offer.  Yes, NH #2 Keene seems to have a fantastic team which should challenge for the D1 title, but with the Black Birds sticking to their tradition of hanging low over the first half of the season, the Crimson Tide is setting their sights even higher.

By higher, we are referring to Northeast #3, LaSalle Academy, Bishop Hendricken and Lowell, MA.  In a race as large and competitive as MI43, LaSalle seems to have the advantage here with two low sticks in Max Dimuccio and Joseph Dos Ries.  Always tough and a storied program in their own right, don’t be surprised if Bishop Hendricken walks away with the top trophy.  Lowell, currently ranked #3 in Massachusetts, will also be in the mix.  Vermont sends their top five teams (in order) Essex, Burlington, U-32, South Burlington and Champlain Valley.  Maine sends their third and fourth ranked teams in Deering and Massabesic.

In addition to Concord, representing NH will be Oyster River (#3), Nashua North (#4), Londonderry (#5) and Pinkerton (#6). Concord needs Forest Mackenzie to nab a top 5 finish and their pack, which can run with anyone, to finish within 20-30 seconds later to challenge for the top spot.  North shares a similar benefit with David Vorbach.  If he finishes in the top 5, and their fourth and fifth can move up, they can compete for the podium.  In this situation, Oyster River, Londonderry, and Pinkerton, all with strong packs, needs one guy to grab a low stick to claim a podium spot!