This Friday, many of the best Division 3 teams and a handful of Division 2 teams will take to the trails of Belmont High School, looking 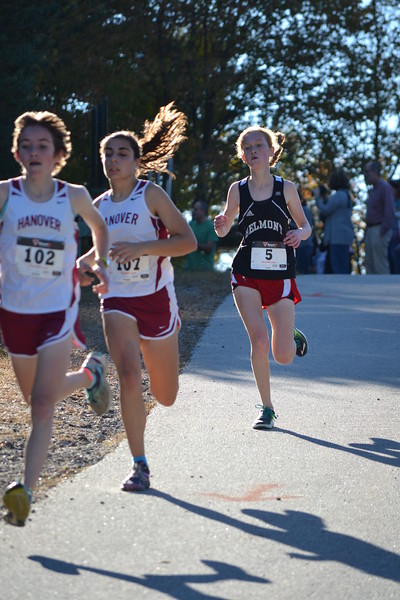 to establish themselves before heading into the championship season.  Named after beloved coach Jeri Blair, the 36th event with its trademark double loop and devilish double hill, makes the 5142 meter course one of the toughest in New Hampshire.  And with a new twist, due to a complication with the surface recently put down on the track, expect things to change a bit.  With the start up by the school and a longer run up to the wooded single track, the current course may avoid the mid pack pile up used to be seen 500 meters into the race.

This race is not only a Division 3 showdown, non-essential in the hierarchy of NH running, but it does host 2 of the top ten boys teams in New Hampshire (Mascenic #9 and Kearsarge #10), and has the #6 girls team in Hanover.  History has shown that the winners at Belmont often go on to prevail in their Divisional contests as well.

With ranked Hanover returning, we expect the Marauders to be in the driver’s seat.  Last year’s #1 for Hanover however has not been their #1 this season, so we anticipate Lelia Trummel to be leading the pack, and possibly the race to better her runner-up spot from last year.  Expect hometown favorite Alice Riley to look to spoil the #1 spot, as she’s been running solid this fall.  Mya Dube of Kearsarge, Delaney Swanson of Monadnock and Samantha Bilodeau (Mascenic) will also be looking to place high up in the standings at the end of this one. Again, with 9 of the top twenty gone, expect things to get pretty shook up.  The top returner is Morgan Baughman of Hanover, with Moultonborough’s Tyler McLaughlin and Belmont’s Nick Randos the next best.  However, the crews of Kearsarge and Mascenic have more than a handful of guys that could break the top twenty.  Look for Mascenic’s Dakota Somero and Kearsarge’s Mason Benedict to be leading those charges.  And defending D3 champs have two front runners in Monadnock’s Lucas Beteau and Tyler Hebert that should be near the front.

For teams, look for this to be a showdown between Kearsarge and Mascenic.  With Kearsarge finishing behind Coe-Brown in the Small School race at Manchester and Mascenic being the best Division 3 team at Black Bear, the winner of this contest will be in the driver’s seat for the Division 3 Championships.  Look for Baughman of Hanover and his fellow Marauders to be looking to upset the duo and win one for Division 2. The 41st 2014 New Hampshire Middle School Cross Country Championships will be held at Londonderry High School this Saturday starting at 11:30. […]