A perfect day for spectating, if not racing, welcomed 16 central New Hampshire teams Thursday to the Capital Area Championships held at Merrimack Valley. A final tune-up to the divisional meets, the meet pits all three divisions plus several private schools in a battle for local bragging rights. 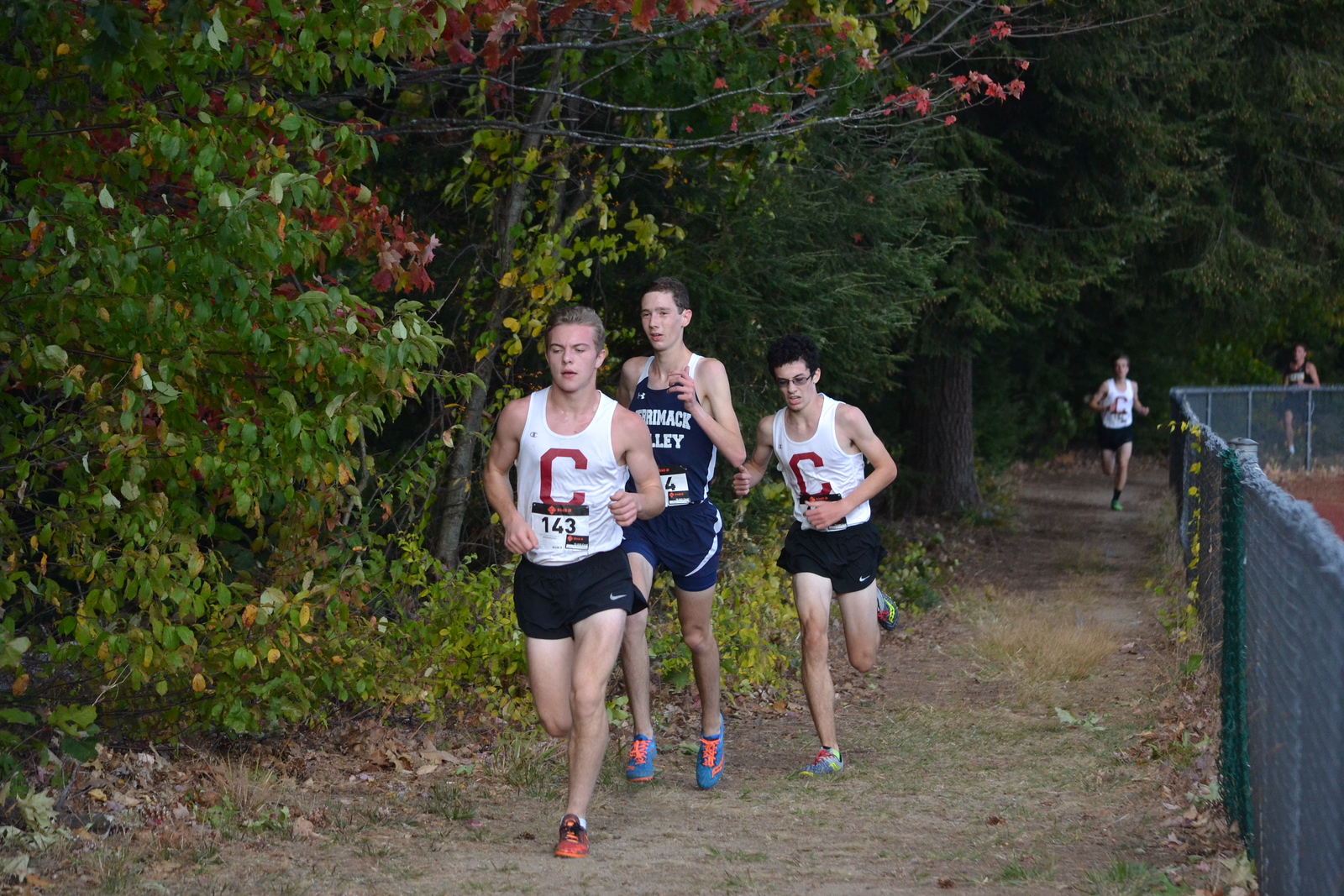 A combined JV race got the day started, and it quickly became apparent where the balance of power in the region was as Concord boys swept the top 6 spots. Sophomore Ryan Devine led the way with an outstanding time of 17:09, which would have placed him 7th in the varsity race. On the girls side, Concord again showed its depth, with Heather Deacon and Ally Leuci crossing with identical times of 20:29.

The boys varsity was next to the line, and one of the biggest questions was whether Concord would choose to back off a bit in preparation for the Division meet, or if they would throw down the gauntlet and make it a race. From the opening horn it was clear that, with three runners in the lead pack of five, that the gloves were off and times would be quick. Ollie Spencer of Concord led the pack through the first mile in 5:00, followed by MV’s David Reynolds, Tilton’s Patrick Guinee, and Concord’s Forest MacKenzie and Eli Boesch-Dining. By the hill just prior to the 2-mile mark, it was down to three, with MacKenzie and Boesch-Dining running together, trailed by Reynolds. That order would hold to the end, with MacKenzie breaking Cam Daly’s year-old course record in 16:10, followed three seconds later by Boesch-Dining, and Reynolds in 16:26. The course, unchanged since 2012, now has three of the top four times from this race. Spencer would hold on for 4th in 16:41, with Guinee taking the  5th spot in 16:45. Following Guinnee would be two

With Tilton not scoring as a team, Concord again had their perfect score spoiled by Reynolds, but still put up a huge margin of victory to win with 18 points, followed by Kearsarge in second with 83. St. Pauls (123) edged out third over MV (129), while Bow took fifth with 150 points.

In the girls race, the expected race between DIII rivals Mya Dube of Kearsarge, Alice Riley of Belmont, and Maya Weil-Cooley played out as scripted. The power trio were alone in the lead shortly after the mile, after taking the lead from Concord 9th-grader Morgane Orcutt. Dube extended her lead to a consistent 40 meters going into the last mile, while Riley and Weil-Cooley ran shoulder-to-shoulder, never quite giving the race away to Dube. Coming down the final stretch Riley found her next gear and began to reel in the leader, but ran out of real estate. In the end, Dube held on in 19:58 while Riley finished just back in 20:01, with Weil-Cooley crossing in 20:08. Next week looks to be a great race with these three! Concord’s Orcutt hung on to cross in

In team scoring, Concord’s depth proved too much for the other teams, giving them their 6th straight win with 56 points. Hopkinton again bested their DIII rivals, taking second with 80 points, while Belmont scored a minor upset in taking third (112) to Kearsarge’s fourth (114). MV rounded out the top five with 146 points.

Best of luck to all runners competing in the Divisional meets next Saturday!