The 2017 New England Cross Country Championship will take place at the Troy Howard Middle School in Belfast, Maine on Saturday

November 11th. This is the 83rd edition of this prestigious race.   All New England states except Massachusetts will be competing.  Each State is allowed 6 teams and any other individual placing in the top twenty five of their respective state meet. 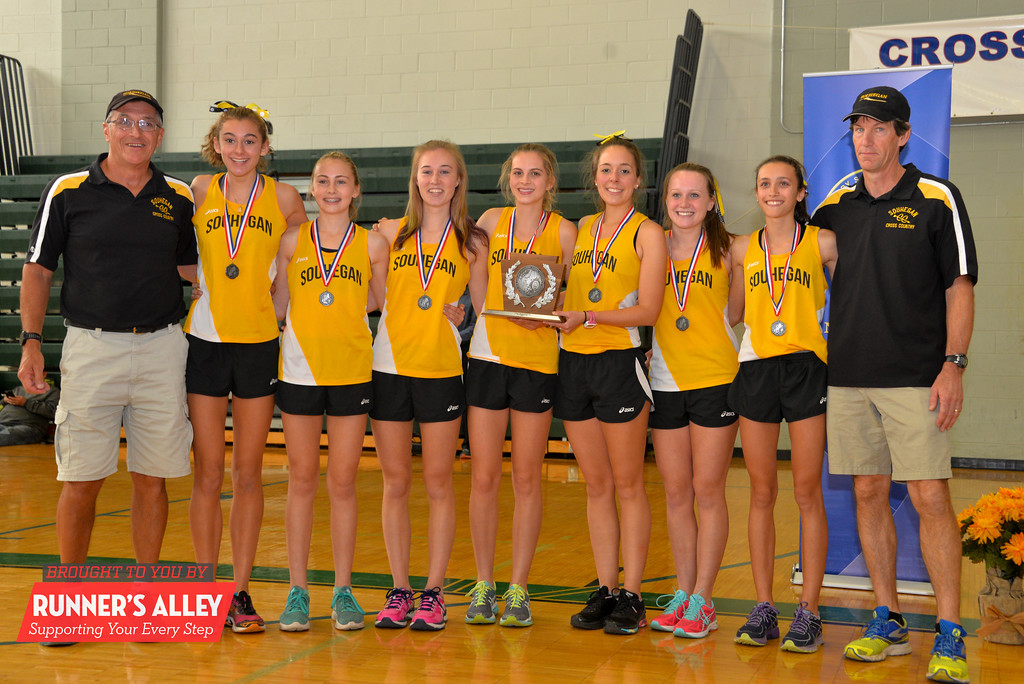 Could we expect more of the same this year?  It is a different course yes, but Souhegan is back, Jackie Gaughan is back.  Pinkerton, Bishop Guertin, and Coe-Brown are back as are Julia Robitaille and Danielle Slavin.  New to the front should also be Oyster River as well as Jane Leighton of Souhegan and Calli Coffin of South. All can factor into the top ten teams or have individual All-New England chances.  Other NH individuals fighting for All-New England (top 25) should be Addison Cox (Coe-Brown), Meghan Cross (Pinkerton), Lauren Robinson (Milford), Haley Schmitt and Caroline Towle of Bishop Guertin.

Regarding team competition, defending champion Champlain Valley Union, VT once again has turned in an exceptional 2017 campaign, but they had close company when winning their state title by only 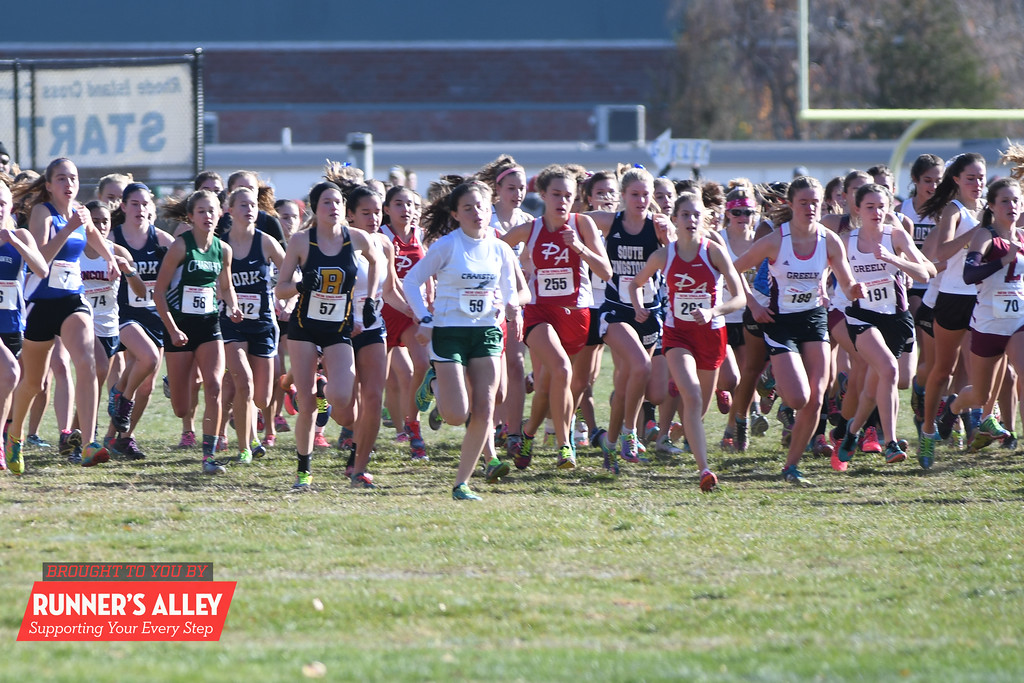 four points over Burlington HS.  Both can be considered threats and top five contenders.  If this New Englands was being contested on a hilly course, their chances would be even better. Connecticut sends state champ Glastonbury, which has a strong 29 second pack time between their first and fourth runners, while Maine will be well represented by their champion Camden Hills led by Augusta Stockman and Grace Iltis.

The stiffest competition for a podium team place will once again come from Rhode Island as perennial powerhouse La Salle was edgedby one point by Portsmouth RI.  Those are 2 teams in Rhode Island now that can make some top five noise.  Add in their #3, Barrington, and one might say they are pretty similar to New Hampshire.  A couple pieces of data make Souhegan look good in this situation.  The 2016 team

seemed to get stronger and faster every week leading to a Nike Cross Nationals berth.  The 2016 team had an team average of 18:58 at MOCs.  Well, their 2017 edition just posted an average of 18:46.  Comparing Pinkerton between last year and this year, they also improved from 19:14 to 18:57, while Coe-Brown improved from 19:16 to 19:09.  Oyster River girls matched that average, 19:09.  While La Salle’s team average also improved, it was modestly, so expect Souhegan to be very much in the mix for the top of the podium this Saturday.

There is much less intrigue regarding the individual title.  Defending champion Jackie Gaughan, having already posted 2 sub-17 efforts this season, will win.  West’s Julia Robitaille looks like she is the favorite to be second.  After that it should be a mixture of states being represented, but do not rule out BG’s Caroline Fischer repeating her 3rd place performance from last year.  She is only a handful of seconds slower than her 2016 self at this year’s MOCs, while having Jane Leighton nipping at her heels.  Rhode Island state champ, Eleanor Lawler (South Kingstown) will certainly factor in this mix as well.   Connecticut state champ Morgan McCormick (Wilton) along with Vermont state champ Rena Schwartz and Maine state champ Sofie Matson will certainly factor in as well. 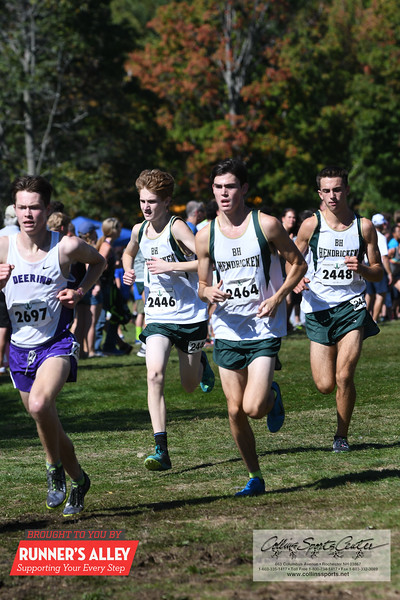 This year the battle will be a lot tighter than last. Five teams all have their eyes on the top prize.  Staples of Connecticut easily won the title last year, but after facing a stiff challenge all season from in-state rival Xavier, Staples has its work cut out for them if they’re going to win.  Xavier, led by Peter Schulten, beat Staples last week in the Connecticut State Championships in a tie breaker. A week earlier Staples led by Benjamin Seiple beat Xavier in the Opens rather handily.

Nationally ranked Bishop Hendricken of Rhode Island led by Jack McMahon and Aidan Tierney finally ended La Salle’s Championship streak at three and look to be the overall favorite to take home top honors. Bishop Hendricken’s pack time has been consistently under 15 seconds all season.  La Salle was the New England runner-up last year and were led by last year’s winner David Principe Jr., who now runs for Stanford University.  La Salle has the top returner from last year, sophomore Max Dimuccio.  Dimuccio sat out most of this season due to injury, but fellow sophomore Jack Wilbur carried much of the load. Nobody has won more New England titles than Bishop Hendricken (12), La Salle has (10). 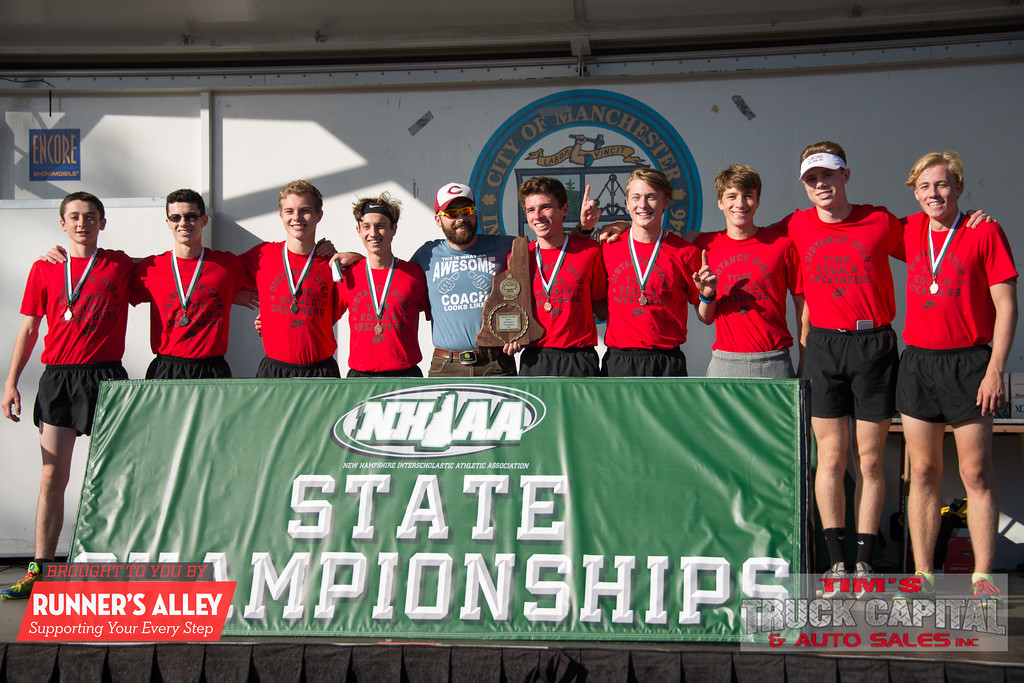 Concord broke the fastest team average record when winning the 2017 Maine Festival of Champions on this same Belfast course.  They may have the most overall talent and will be a definite contender for the championship.   After winning its first Division I Title in 36 years and winning the Meet of Champions in average record time, Concord had four boys under 16 minutes to propel them to victory.  Forest MacKenzie the Division I Champion ran 15:38, Eli Boesch Dining was 15:42, Oliver Spencer was 15:49 and Matthew O’Brien was 15:55. Concord just needs their 5-7 to close the gap.  If that happens Concord will be in the championship mix.

Teams that will battle it out for a top 10 finish include Falmouth of Maine, Nashua North, led by MOC Champion David Vorbach and MOC Runner-up Max Ireland, East Greenwich RI, led by Rhode Island Champion Jeffrey Pederson. Fairfield Warde (Connecticut), Essex (Vermont), Burlington (Vermont) and U-32 (Vermont) are ready to challenge as well. 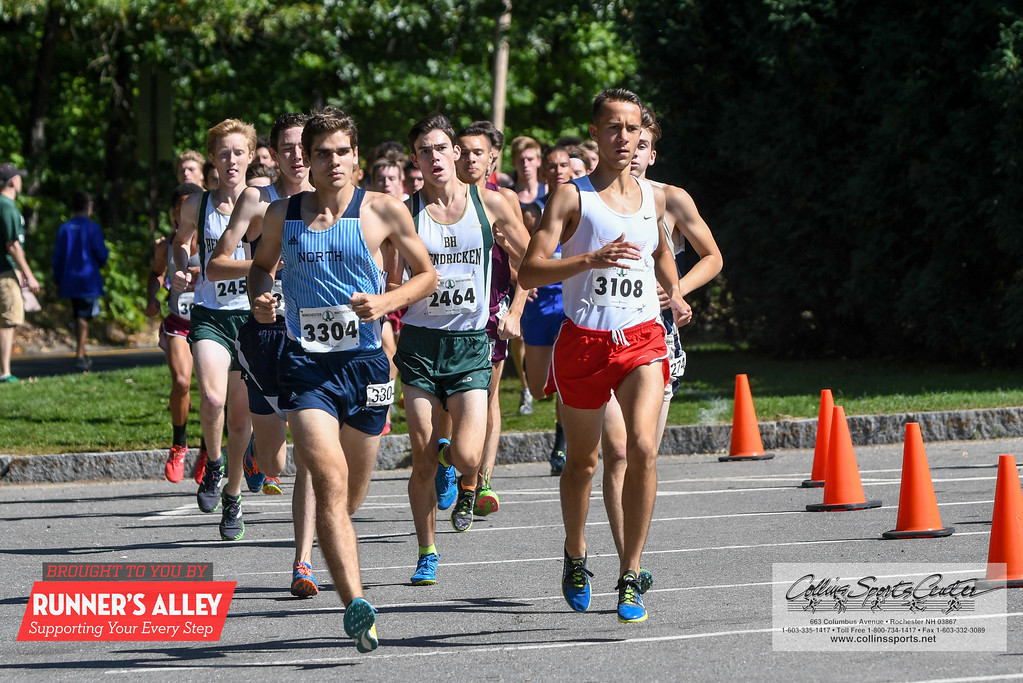 Individually, the championship should come down to the two elite runners. Maine’s Luke Laverdiere of Yarmouth has to be the slight favorite.  Laverdiere has run this course many times and currently has the second fastest time in history with a blazing 15:11 at the Festival of Champions this September. Nationally ranked Drew Thompson of Fairfield Prep Connecticut with a personal best of 15:13 is more than capable of giving Laverdiere and the course record of 15:06 a go. This could shape up as an epic war of wills and a race time that may creep under 15 minutes.