Well its here!  Thanksgiving weekend!!!  Nike Cross and Footlocker Northeast Regionals are Saturday!  Who has the best shot at 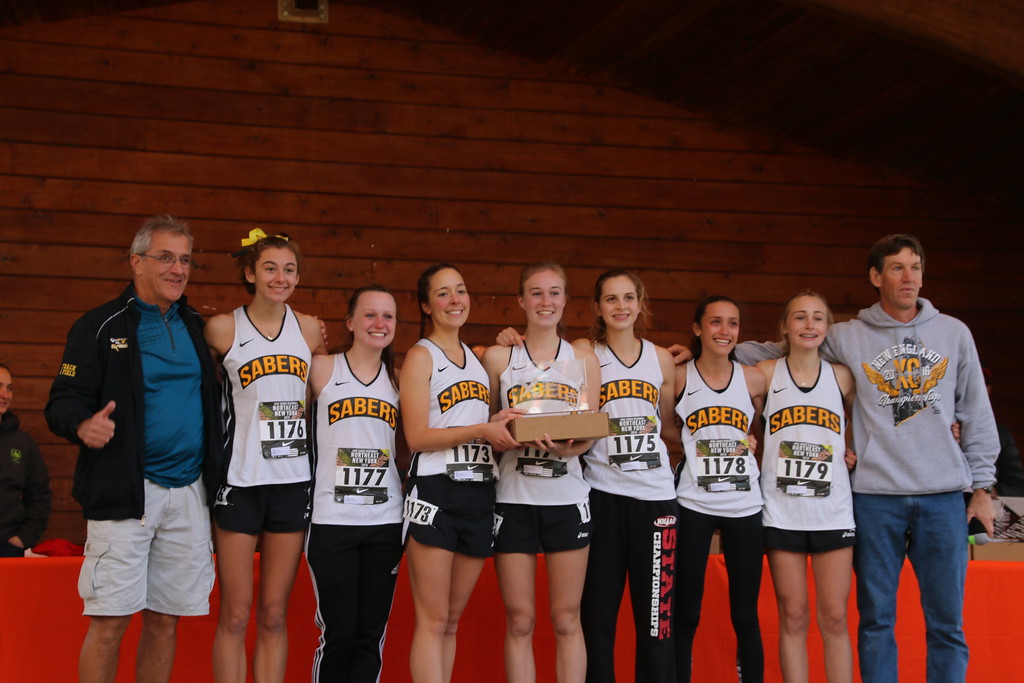 punching a ticket to a National Championship???  Last year, NH flexed its ‘per capita’ muscle as it qualified a girls team (Souhegan), and 2 individuals (Patrick O’Brien & Jackie Gaughan) for two different national championships.

For those that do not know the difference, Footlocker is the older sibling for individuals, no teams, and the top 10 finishers qualify for a trip to the national championship in San Diego, California.  Nike Cross Nationals, NXN, was created to crown a National Team Champion.  The top 2 teams in each region automatically qualify for the trip to the national championships in Portland, Oregon, but as Hanover showed us in 2007 and Coe-Brown showed in 2013, 4 teams across the country can nab an at-large bid to the meet as well.  Last year, Souhegan girls became the third NH program to qualify for a trip to Oregon.  Individuals can also qualify from each region by placing in the top 5 individuals who are not on a qualifying team, as Bishop Guertin’s Caroline Fischer demonstrated last year, Coe-Brown’s Liz Danis did in 2015 and Oyster River’s Maegan Doody did in 2014.

On the time schedules for Saturday, it looks like Footlocker Northeast will be up first on the famed Van Cortlandt Park in the Bronx, NY.  All eyes will certainly be on Jackie Gaughan as she attempts to qualify for Nationals for the second consecutive year.  While she dominated NH and New England over the course of the regular season, Gaughan had a hiccup of sorts at the New England Championships.  However, if her individual history proves to true to a pattern, expect Gaughan to bounce back in a big way!!  Every runner is due to have a sub-par showing from time to time, the measure is how do they respond.  Gaughan has proven she can.  Expect her to have a big day.  Joining her in the Bronx will be All-New England Danielle Slavin (Oyster River), and Milford’s Rebecca Durham and Lauren Robinson.  On the boys side, both David Vorbach and Max Ireland of Nashua North are entered as is Exeter’s junior Jacob Winslow, who garnered All-New England honors in Belfast.

This year, 7 NH teams are making the trip to Nike Cross Northeast Regional in Wappinger’s Falls, NY where the historical Bowdoin Park runs quite similar to Derryfield.  Making their debut at NXR Northeast is the Pinkerton Academy (Trailblazers) girls.  The reigning New England champions, the Trail Blazers will look to capitalize on their momentum and surprise the rest of the Northeast to qualify for NXN. Last year’s surprise team, Souhegan (Saber Running Club), also returns, and do not count them out.  They have the experience of qualifying and competing in Oregon last year.  This experience and confidence could certainly prove fruitful. Finishing just three points behind Souhegan at the New Englands was Coe-Brown (Black Bear XC Club).  They appear to be gaining momentum at just the right time.  Bishop Guertin (Cardinal XC Club), New England runner-up is also entered, but looking at their entries, they don’t seem to be running their full team.  However, anything can happen, especially when they have a low-stick in 2016 national qualifier Caroline Fischer. Up and coming Nashua South is also entered.

For the second consecutive year, Concord boys are entered in the boys race as the The Tribe XC Club.  They will be facing an uphill battle as the strongest New England teams are entered.  Overall, this is truly a toss up race team wise among several teams with three New Jersey teams topping the Northeast poll and New England Champ Xavier and Staples looking to break it up. Coe-Brown boys, very young, are also entered and will run as the Black Bear XC Club.

Individually, New England Champ West’s Julia Robitaille missed qualifying for nationals by 1 spot last year.  Expect her to fix that Saturday.  As always, expect her to run a disciplined, intelligent race and challenge for the individual title.  After all, nothing will be different as her twin sister Corinne will also be running looking to cap a rather impressive debut season herself.  Bishop Guertin’s Fischer had a rough start to her season because of injury, but she very well may have the most rested legs in the field.  She has the pedigree and now the experience, so don’t be surprised if she is in the mix! One thought on “2017 Northeast Regionals: What to Watch For?”