Visit the Black Bear Meet Hub view a course preview, past race videos, interviews, pics, results and articles!  This will be your one stop for everything regarding the Black Bear Invitational.  This year’s Meet Hub is sponsored by

T-PiN rollers, who will be on site Saturday to showcase their products!!!  Great recovery tool. 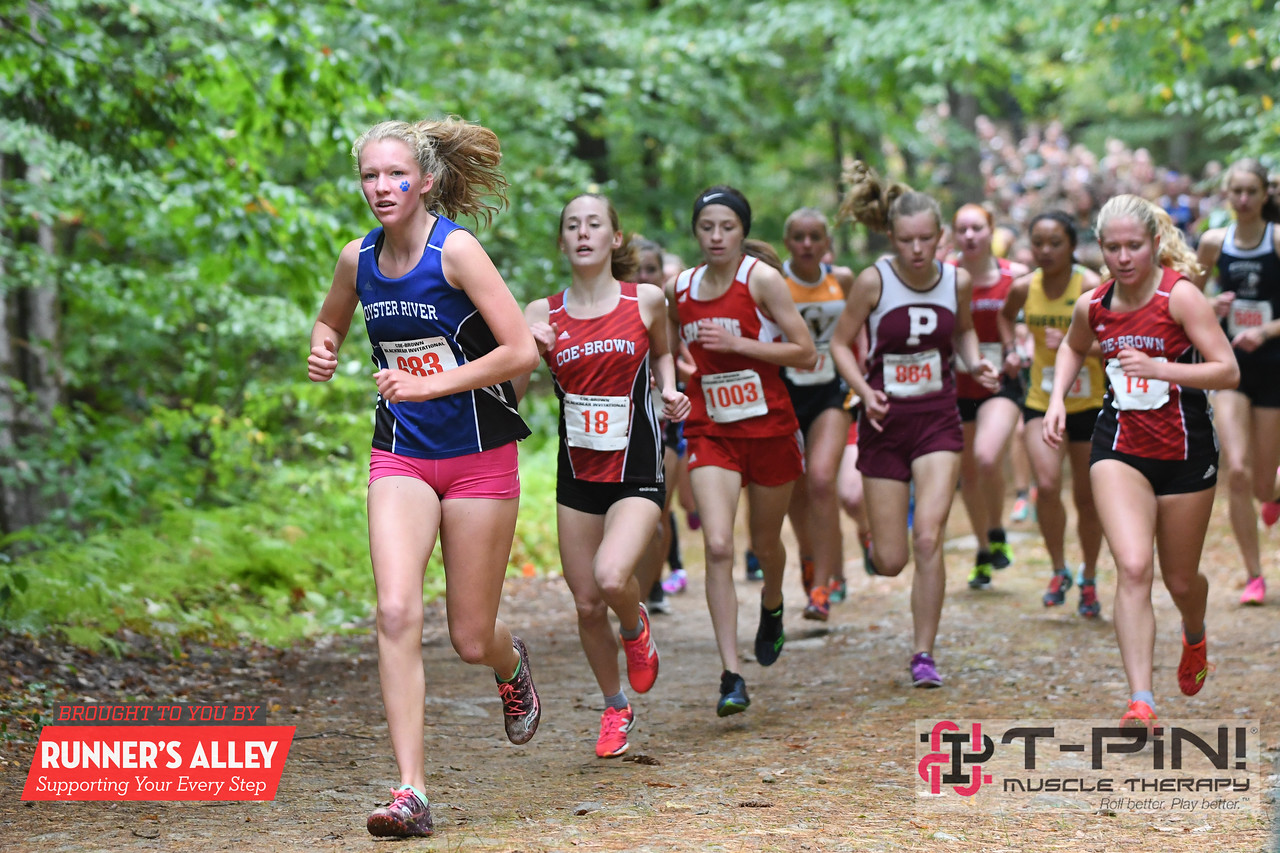 In its fifteenth year, the Black Bear Invitational has become one of New Hampshire’s premier invitationals and a destination for athletes from all three divisions to test their racing acumen on the challenging, yet fast, Coe-Brown Northwood Academy course.  Having hosted some of the greatest match-ups in New Hampshire outside the Meet of Champions, we get a preview into the best of the best wrestling for state supremacy heading into the championship season. With six ranked teams on the boys side (and Hanover who fell just outside the rankings) and six more on the girls side (plus Central who finished just outside as well) along with Champlain Valley Union Vermont’s Varsity squad and Phillips Exeter for both genders, the 2018 version will be a veritable “Who’s Who” of the best individuals in each division, the entire state and even New Englands.

On the girls side, #1 ranked Coe-Brown gets to test itself over the familiar terrain of their home course, versus in-state challenges from  #5 Oyster River, #6 Concord, #7 Bedford, #9 Pinkerton, and #10 Con-Val, and private school Phillip Exeter, winner of the Bobcat Invitational.  But probably the most interesting match-up will pit the Bears against the ladies from CVU. CVU won last week’s Large School title at Manchester and you might think their team average of 19:59 and pack time of 2:11 would be too much for the CB girls to overcome (they had a 20:40 average and 2:53 pack time), but you would be forgetting this is Bear country and expect the CBNA girls to be geared for the challenge and fight hard to defend their home turf. 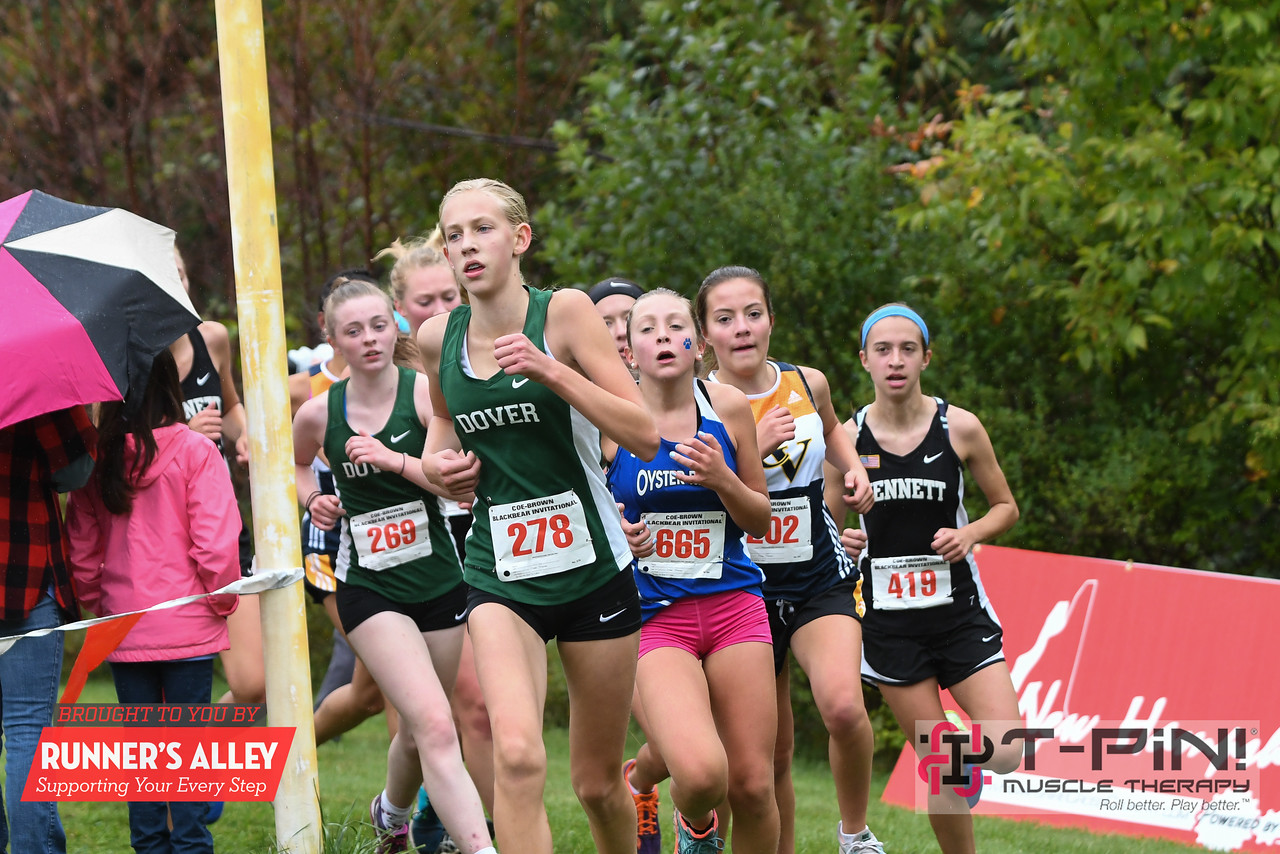 And while the battle for overall Black Bear team championship seems to be between these teams don’t sleep on the rest of the field.  Pinkerton slipped in the rankings, but remember that less than a year ago, without winning MOCs, the Lady Astros won the NE title. Both Bedford (#7) and Central have been on the rise while ConVal (#10) has arguably the best top three of any team in New Hampshire.  Best in NH?  How about Oyster River’s depth?  This will eventually pay off for the Lady Bobcats.  We also have some interesting D3 team matches between Campbell and Kearsarge. Campbell was the top D3 team at Manchester, but Kearsarge did not compete there this year.  With top D3 returner in Mya Dube, expect there to be a close battle between those teams.

Individually the top runner from last weekend’s Manchester Invite is CVU’s Alice Larson followed by teammate Ella Whitman.  Also up front expect MV’s undefeated Sophia Reynolds, who has really not yet been pushed in a race.  Coe-Brown’s Addison Cox obviously has extensive experience on the trails in Northwood.  Add in the CV trio of Rachel Hurley, Clare Veverka and Schuyler Michalak as well as Kearsarge’s Dube (don’t let her hang around until the final stretch!).   Don’t sleep on Milford’s Lauren Robinson, OR’s Lily Doody, North’s Arianna Braccio, PEA’s Giovani Pisano and Carly Rinko of Bedford either.  Now that’s an All Star lineup not seen in any pre-championship race! The course record is 18:09 set last year by Milford’s Rebecca Durham and expect it to be challenged by one or more of these girls. 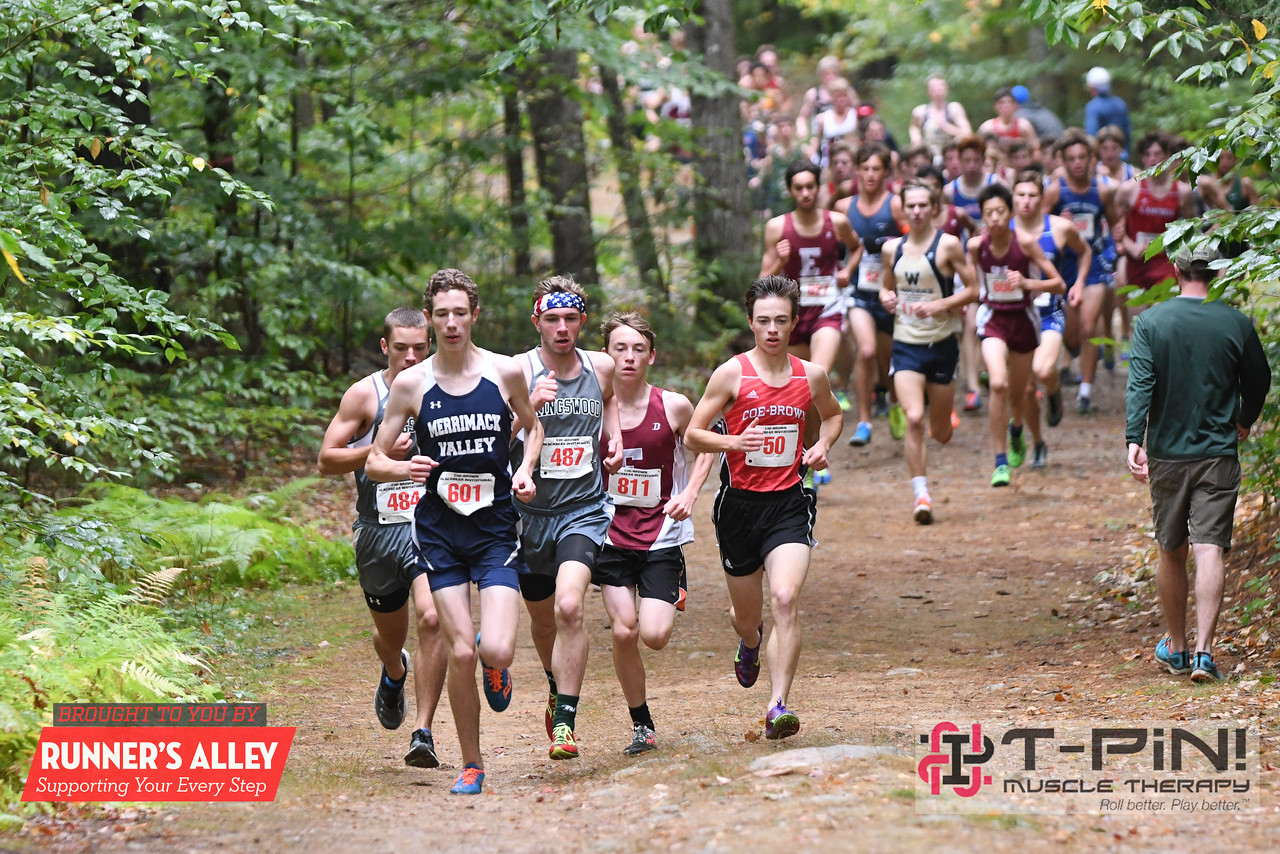 On the boys side, the show doesn’t lose any luster either, with NH’s top team in Concord matching up against #2 Coe Brown, #5 Winnacunnet, #6 Oyster River, #8 Nashua North, #9 Mascenic, Hanover along with private school Phillips Exeter.  While Concord should have the upper hand in this one, with NH’s fastest duo in Forest MacKenzie and Eli Boesch Dining leading a team that had a 56 second pack finish and an team average of 16:37. But again expect the CBNA boys to give it the old college try and with tight bunch of youngsters learning every race, we could see a real battle on Coe Brown’s home turf.  The battles among the other teams racing will be interesting as well. Oyster River had an incredible pack time of 48 seconds and would like to close the gap to Winnacunnet. Meanwhile Winnacunnet is establishing themselves as one of the teams of the future, young and hungry. Nashua North and Mascenic have some unfinished business, tying in the merge (running separate races) to see which team deserves NH’s #8 spot.  Mascenic is also in another battle, this one of the D3 kind, racing Kearsarge and Trinity for the first time since losing to those teams at the Jamie Martin Invite. Throw Campbell into that mix, led by one of NH’s best in Jeffrey Allen you have a D3 showdown brewing in Northwood on Saturday.

In the girls race, the top returnee is Deerfield’s Sophie Hopkins.  However Strafford’s Mallory Taylor and Deerfield teammate Bella Lemay beat Hopkins at Little Manchester and might have the upper hand. Other challengers to the front should be Tessa Brown of Oyster River, Skye Lambert of Boynton, Kylie Aho of JRMS, Devan Booth of Hillside and Mary Joy of Northwood.

As for the team battle, expect Deerfield to command the field in this one.  Coming off a second place finish at Little Manchester and the top D3 team there, expect the Dragons to be race ready.  Looking to secure the runner up position, expect one of last year’s #2 – #4 teams to fill the void. Hillside (last year’s #2) lost impact freshman Fiona Doherty to HS but should be able to rebuild quickly.  Oyster River has most of their team returning and should be a factor. Boynton lost a number of scorers to HS but return some veteran point scorers and are learning how to get it done. 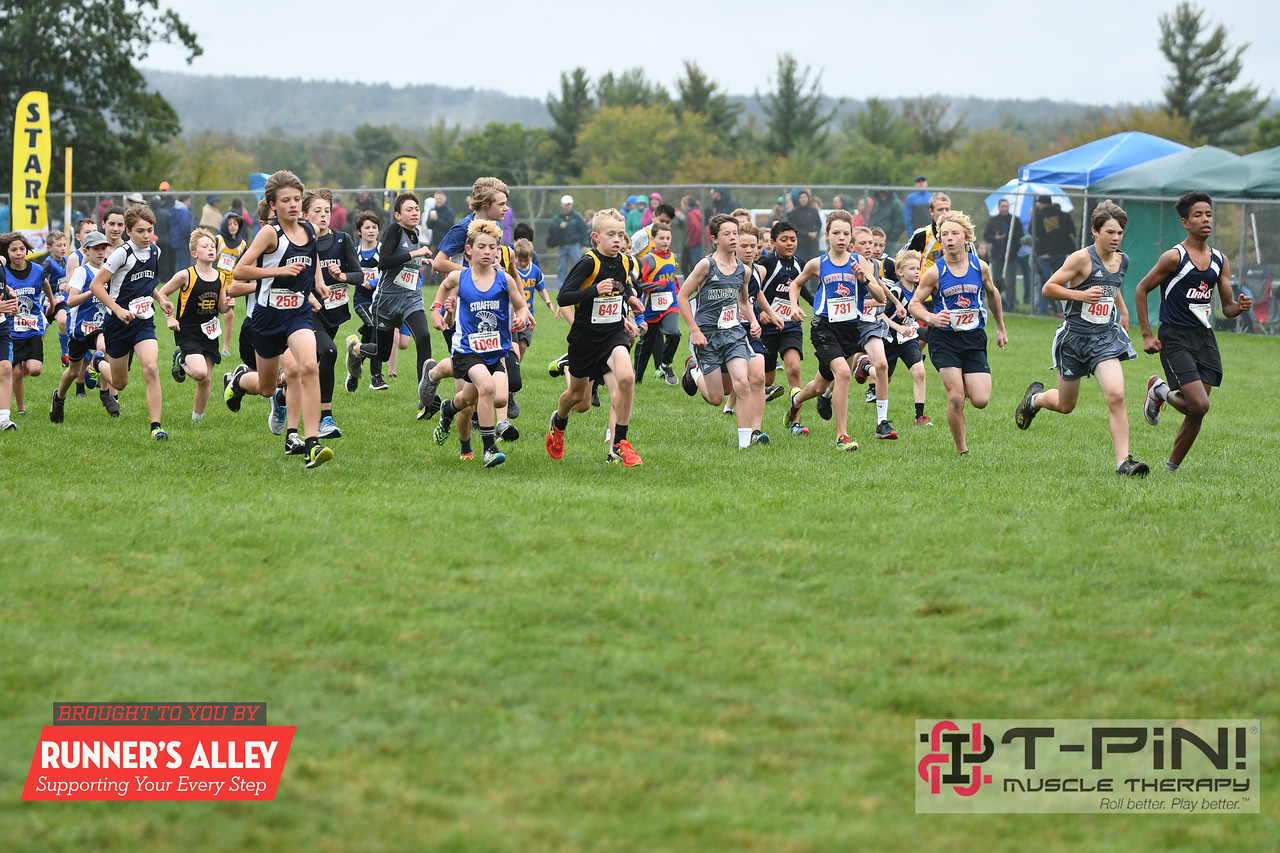 Aidan Cox is the defending champion and the course record holder in the boys race.  While anything can happen, he has almost a minute lead on the next best returnee in Avery Crowell of Portsmouth. Look for Northwood teammate to Cox, Tyler Tkaczyk to lead the chase group along with OR’s Theo Fleischer.  Deerfield will pack their athletes in the top thirty or so and expect Boden Rand to be leading them. Boynton will have a strong front pack as well, led by Drew Traffie and Logan Lucas, so expect them to be chasing and looking to capitalize on individuals going out with a fast pace.

Teamwise the smart money is on Deerfield.  The #1 D3 team Deerfield has a strong team concept and are coached by one of the best in the state.  Expect them to top the charts this year. Oyster River won the team title last year, but lost a lot of their firepower up front to the HS.  Look for them to try to hold onto the second spot. Northwood returns a solid top three in Cox, Tkaczyk and Max Heigis and it might be enough to secure third.  Looking to claw their way into the top three would be Boynton, a young team last year seems to be molding into a top team just in time for the championship season.