The week got started on Monday with some tempo 800’s on the cross country course. It was definitely slippery and a lot of the course had some standing water on it from the rain over the weekend, so some of our times ended up being a little slow.

Tuesday, in my opinion, was undoubtedly the highlight of the week. Practice started like any other long run day as most of the team got out for around 40-60 minutes. After that though, the whole team stayed behind to watch the 2017 NCAA Men’s National Race, headlined by Northern Arizona University’s back-to-back title pursuit. Nationals is a 10k as opposed to 5k, which means 30 minutes of running…and watching. The video lasted about 40 minutes, and though some of the team didn’t seem to care, my co-captain Robert and myself couldn’t stop watching. It was a really inspiring performance to watch as NAU completed their repeat championship, just as the boy’s squad is preparing to do. Plus, Smith bought us all pizza while we watched the race. What’s not to love?

Friday concluded the week with a trip up to Belmont for the Jeri Blair Invitational. The course is considered to be one of, if not the hardest course in the state, so it’s really great practice for States, as Derryfield Park has a lot of similarities to it. Plus, with a lot of top D3 contenders being at the meet, it’s a great gauge to see where our teams stand among them. The girls were completely unreal during their race, running with the kind of poise that is unexpected out of a young team. Four out of the five girls on the team have been racing for less than two years, making it even more impressive for the girls squad to perform so well. They ended up placing as the 2nd D3 team at the meet, losing only to Hopkinton, and also putting two girls (Sophie and Quinn) in the top 25. 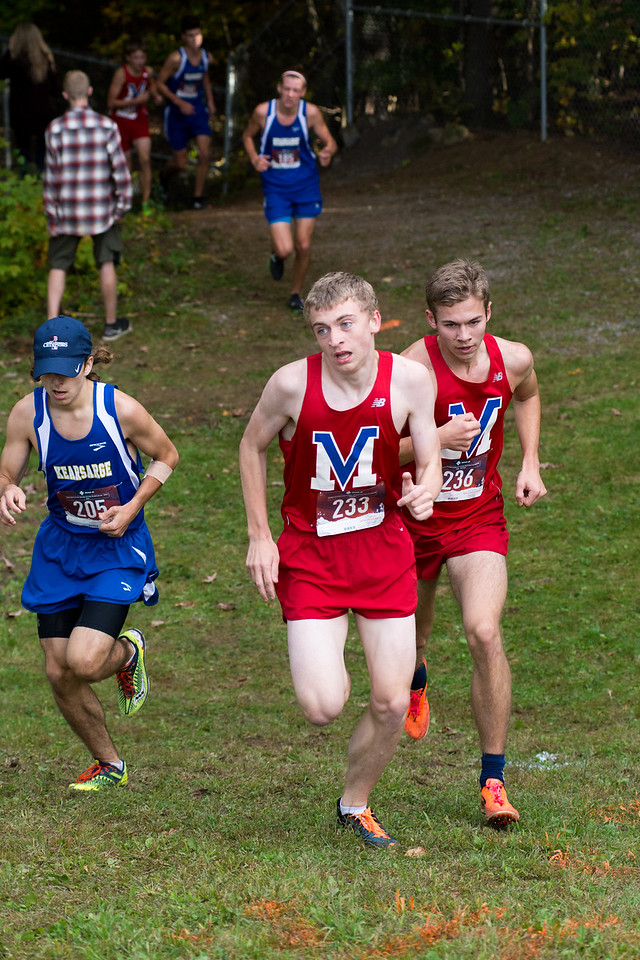 The boys also ran well, cruising to a solid victory. It was really satisfying to see our guys be able to place at the top of D3 once again, showing our improvement since Sanborn Invitational. The guys were hungry, something that would have been hard to say back at the beginning of the season. Landen took the individual win as well. However, I think the real success for the race is that I managed not to fall a single time! What a week.

Week 8 felt pretty short, but overall had some great moments that make you love cross country. Both teams will look to resume working hard after the long weekend.

As our runners returned from their long weekend off, we got right back to work on Tuesday for race prep. On Wednesday, the temperature picked up, and we headed to Derryfield for a meet. The race was pretty small, and the goal for the boys was to stick to the leader of the race for the first 2 miles, and then go around him. We did that pretty well, and ended up having the top 5 finishers at the meet. The girls’ goals were for each of them to key up on certain runners, and try to race with them. They did this exceptionally, as both Quinn and Sophie finished in the top 5, and the girls won overall. There were also some really solid individual performances from some of our newer guys too, especially Byron and Sam.

The week ended for most on Friday as we took a trip to Conant’s track to run a 10-lap time trial. On the first day of practice, all of the returnees for our team did this exact same workout. For those returnees, the workout gave us an opportunity to show how much we’ve all progressed since Week 1. For all the  first-year members of Mascenic XC, it was an opportunity to get a feel for the workout so they’re a little more prepared for it at the start of next season.

On Saturday, the team had an optional practice at Nashua High School South, where the Meet of Champions course is. Those that went did a 2-on, 3-off workout to help get a better feel for the course. And though I can’t say that very many boys showed up to the practice, I can say that all of the girls were able to make it. On top of all that, those that attended the practice also got to watch the middle school Tri-County meet, which was awesome! Boynton as a whole ran really well, and it’s exciting to see what those guys will bring to the table when they get up to the high school.

Week 9 was short and sweet, but very productive. The team will look towards next Wednesday where our JV guys will be competing at the JV Championship at Coe-Brown.