We began our third week of practice on Tuesday since there was no school on Monday. Tuesday was our first official meet, the Jamie Martin Invite at Sanborn. The girls team ran amazing, taking third place overall, and everyone PRing. We had three girls in the top twenty five, all of which earned some new t-shirts. We definitely weren’t expecting to place that high so it was a great feeling to hear the announcement. Afterwards we enjoyed a nice swim with the opposing girls teams while cheering on our boys. The boys ran good, too. placing sixth out of sixteen teams, with Landon Vaillancourt in first and Connor Traffie not far behind.

Wednesday, we did Dipsea Hills, which is sets of rolling hills we run on Old Country Rd. This is an up and over workout, named after the infamous Dipsea trail race, with little rest before your up and over again.  The workout was hard but the team handled it well. Smith was very thoughtful and saw that some of our runners wore themselves out and cut their cool down short with a ride in the iconic Fiat.

Thursday was our long run of the week, sixty minutes give or take. That day we got all teamed up and ready for Hill Billy relays which were the following day. Everyone was planning their team names, coordinating shirts, and thinking of snacks to bring for the awards presentation after the race.

And Friday, the last day of week three was exciting. It was time for the 2nd Annual Hill Billy Relay! This race was low key consisting of Kearsarge, Hinsdale, and Hillsboro Deering. Each teammate had to run two 1 and 1/2 mile loops of our home course with an ear of corn as the baton. I must say the outfits were on point with teams showing up in overalls, flannels, and even straw hats. In first place was Chu, AKA Gabe Turner and Jethro Somero and for girls was Runner’s Gone Wild, Victoria and I (Maya).

After the race the teams met up in the Classroom to enjoy cookies, iced tea, and the famous Traffie Nisu (Finnish sweet bread). In the end, this meet was fun, the Kearsarge, Hinsdale, Hillsboro teams are a blast, and I think I speak for everyone when I say I can’t wait for next years.

Just when we thought it was gonna get easy were slapped with Housing Development Hills. The worst of the worst. A single hill is seemingly easy to run up, right? Wrong. This particular hill is a 300 meter monster of pavement in a halted development housing development. Stolen from Keene State, the workout consists of 300+ meter repeats, uphill, using a 400 meter split time. The workout was to just run eight to sixteen with the recovery on the downhill. This makes the first ones seem impossibly easy, but the difficulty comes about five in, meaning some people still have eleven to go after that. Despite this being my least favorite hill workout, I think everyone did a nice job. We all hit our solid times, and no one passed out, even though some people thought they might.

Tuesday was our long run day. Cooler temperatures made for easy sixty minute run. With Homecoming at the end of the week, people were scrambling home to work on floats, and that’s all anyone seemed to be talking about.

Wednesday we ran 500s on our wonderful dirt track at goal pace. The team looked good, killing up to eight repeats, the workouts max. This workout will be repeated closer to Divisionals with a third less recovery as we’re coming into the end of the season. Being the hottest day of the week I was glad to overcome the heat but a bit disappointed to still be getting sunburned in September.

We started practice on Thursday with a Workout Wednesday video centered around Mike Smith.  Not our Mike Smith, but the coach of Northern uArizona University and his team. They were running a six to eight mile aerobic threshold workout, averaging 5:17 per mile. The video showed teamwork and how to run as a unit. This got us pumped for our Homecoming meet tomorrow. But for today, we ran easy, doing forty five minutes followed by fifteen minute abs. Finally a cold rainy day came around, which gave us a chill run, and left us ready for tomorrow.

Our homecoming meet went exceptionally well, and I think everyone felt accomplished by the end. Both teams had plans for how they were to run their races. The girls team had people to stick with and try to hold onto throughout the race, while the boys’ goal was to get their first seven runners in the top seven spots. We managed to stick to our goals, and there were impressive races all around and I think we put on a good race for those who came to watch us! (Thank you to all the spectators, family, teachers, alumni for coming out!)

Shout to Landen Vaillancourt for winning the Nashua South Saturday Meet with a time of 15:41, a Mascenic record.  Not bad, two wins in two days! 😉

After a mid week elevation in temperatures, Friday the 13th, the date of our homecoming meet, were nothing to be afraid of.  Sitting in the low 60s with a good breeze, conditions were perfect for running fast. The Path to Valhalla Cross Country Course of Champions was in excellent condition, drying up from last year’s monsoon of a cross country season.  With 16:24 and 19:39 as the standard, would a course record be set?

The girls race, starting promptly at 4pm got off to a quick start with Hinsdale’s Margaret St. John and Mascenic’s Quinn Aldrich getting out to an early lead, tailed by Hinsdale’s Davis, Fleury and Yialiades, along with Mascenic’s Sophie Callahan, Bane, Callahan and Smith.  Hinsdale had shown some early season strength against Mascenic in their first meet matchup and it seemed both teams were looking to see where they were with respect to each other’s team as we approach mid season. Derryfield’s Emma Pyles was lurking in the chase pack, looking to crank it up over the second half of the race.

At the half both Aldrich and St. John were running in lock step over the field, actually 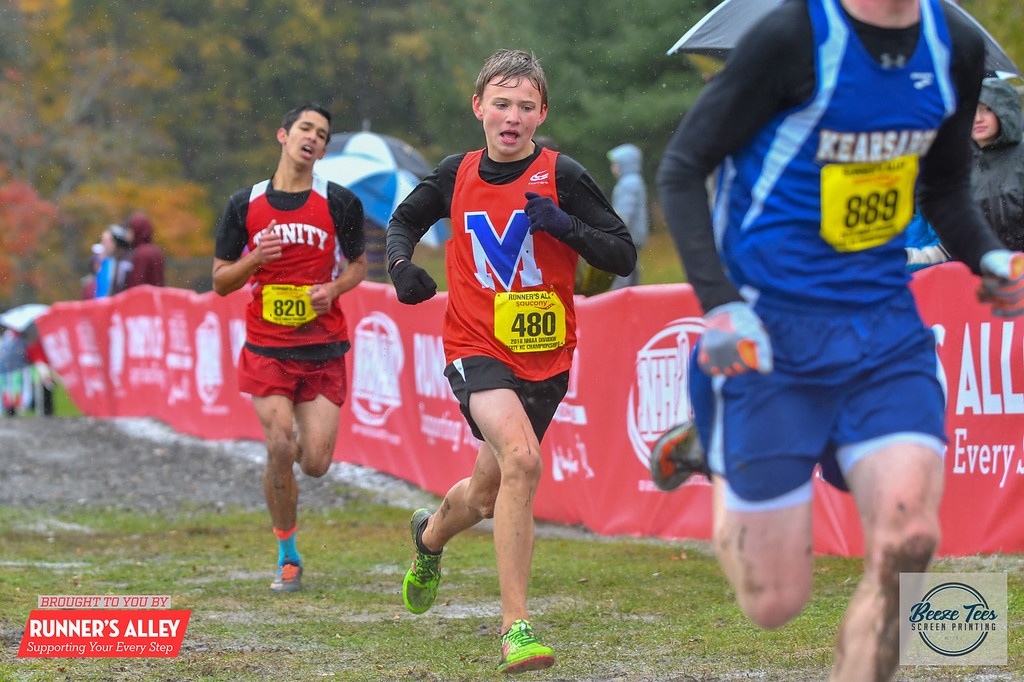 contacting each other every so often as they were so close.  Just after the 2 mile Aldrich opened a small gap, extending up to almost fifteen feet over St. John and seemed to be in the driver’s seat. Team mates Bane and Callahan were moving up as well.

As the girl’s came up over the last uphill section, Aldrich held a 10 meter lead over St. John.  But St. John wasn’t finished yet, and over the final 300 meters stalked Aldrich and finally ran her down in the final 100 meters to win in 20:50.  The first true strength workout week of the season exacting it’s pound of flesh. Next in would be team mates Bane and Callahan, both looking a bit race weary.  Derryfield’s Pyles would have a real strong second half, moving into fifth by the finishing tape. Davis and Fleury of Hinsdale would be the next in, with Callahan, Derryfield’s Lamont and Yialiades rounding out the top ten.

Mascenic would put their top five in the top eleven, securing the win, 28 – 38 over Hinsdale.  Derryfield would be third with 56 points.

In the boys race it became obvious early that Mascenic had a similar team concept in mind, with Landen Vaillancourt, one of NH’s best, setting a comfortable pace up front.  With seven of the top eight through half way, Mascenic was in complete control of this run, with Derryfield Gendron the lone non Mascenic runner in the top pack.

After halfway and given the green light, Mascenic’s Jethro Somero made a bid for the lead but that lasted only moments before NH All Star Landen Vaillancourt went to the front along with team mate Connor Traffie.  With the field strung out and moving now at a solid clip, Vaillancourt would remain at the front, finishing in 18:15. Following him in for the next six places would be teammates Traffie, Somero, Allen, O’Shea, Traffie and Turner.  Gendron would be eighth, with Derryfield’s Kurdek and Flinkfelt rounding out the top ten.

Mascenic would perfect score this one with 15, to Derryfield’s 52 and Hinsdale’s 76. And while the score sounds a bit scary, the efficiency and effectiveness of the meet was not.  With the last finisher crossing the line at 5:04, teams were able to get back to their hometown with some sunlight left to enjoy the crisp fall temperatures, the kind that remind us of cross country.