Visit the Black Bear Meet Hub view a course preview, past race videos, interviews, pics, results and articles!  This will be your one stop for everything regarding the Since 2006, when the best of the best in NH descended upon the rolling and challenging course in Northwood, the Black Bear Invitational has been one of, if not the highest quality cross country meet in NH.  Billed post race as the pre Meet of Champions, fittingly held the week after Manchester, that epic race which saw four of the six teams that qualified for New Englands, along with eight of the top ten individuals in the boys race at the Meet of Champions, changed the scope of Coe Brown’s D2 meet forever.  With 30 high school’s competing, including Vermont powerhouse Champlain Valley Union, runner up in last week’s Manchester Invitational Girls Large School Race, and private school Phillips Exeter who dominated all divisions of the Bobcat Invitational, there’s certain to be some excellent racing on tap. Add in the fact that #6 Bedford, #7 Coe Brown, #8 Concord and #10 Kearsarge on the girls side, and #1 Coe Brown, #4 Pinkerton, #5 Oyster River, #6 Concord, #7 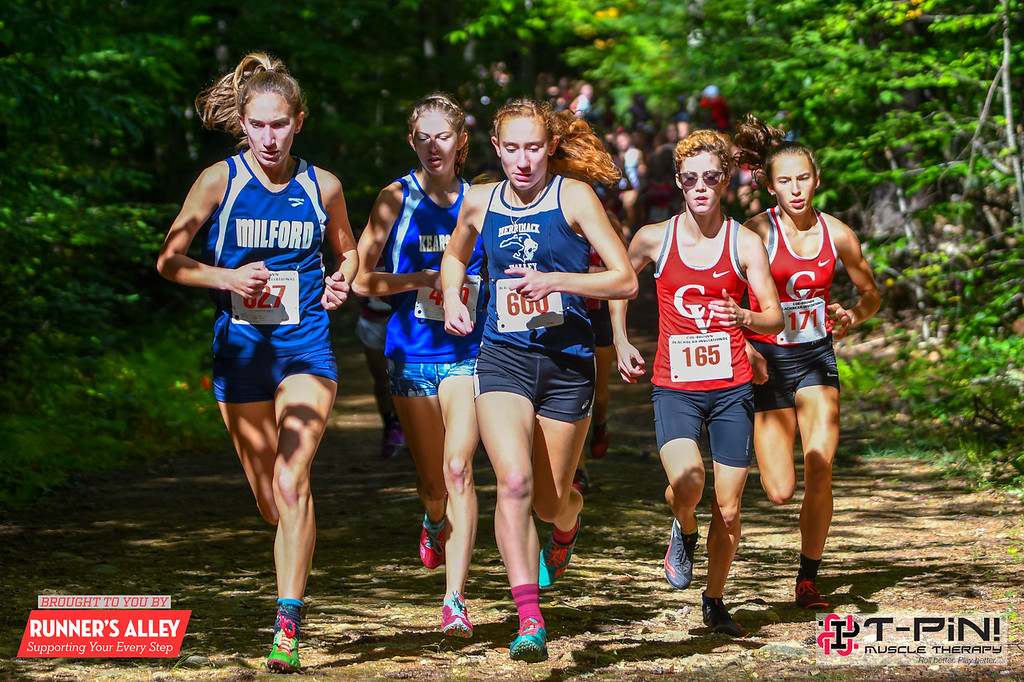 Winnacunnet and #9 Hanover on the boys side will be racing each other in one race and we have one of the premier contests of the fall season.

The top returner is Champlain Valley’s Alice Larson.  Larson along with Alicia Veronneau led CVU to second last weekend without the support of their #3 and #5 runners as the “black death” that has been hitting teams across the state played havoc with their starting lineup.  Phillips Exeter will be looking to bite into the CVU line up with Sophie Cohen and Gia Pisano, who led their team to the Bobcat Invitational title. Challenging for that top spot should also be Kearsarge’s Mya Dube after finishing third here last year.

Making their 2019 full squad debut, home host Coe-Brown will get back the services of their team leader in Addison Cox, making them a threat to move way up in the NH ranks.  Add in Morgane

Orcutt of Concord, who will be looking for some redemption after a tough race last weekend along with Bedford’s Carly Rinko and Winnacunnet’s MacKenna Whelan, the race up front should be a good one..  Christine Aman of Hanover and Oyster River’s Lily Doody will take on the big dogs this weekend having run the Small School race last weekend. Ashlyn Smith of Dover, Abbey Halloran of Milford also be looking to chip their way into the top fifteen.

As for teams go, Champlain Valley Union with their National ranking should be the class of the field.  Should they still be crippled by cold season expect Bedford, Coe Brown, Concord and Phillips Exeter to be battling it out for top team honors.

Top returner in the boys race is Winnacunnet’s Colin Donnelly and one would expect him to be the favorite; however, he is sure to be challenged by the winner of the MI45 Small School Boys Race in Mascenic’s Landen Vaillancourt as well as MI45’s top NH runner in Coe Brown’s own Aidan Cox and teammate Luke Tkaczyk.  Expect Cox and Tkaczyk to be aided by other teammates Wyatt Mackey and Dawson Dubois at the front.  Sanborn’s Dylan and Jared Khalil, the latter who had fantastic freshman debut at Manchester, should be in the chase for that top spot should Dylan return to action this weekend.   Other protagonists for the top spots include Luke Brennan, Stephan Connelly and Zach Plaza of Pinkerton; Eben Bragg, Ryan Devine and Brayden Kearns of Concord; Jack Taylor and Noah Teracena of Winnacunnet; Myles Carrico,  Andy O’Brien and Owen Fleisher of Oyster River as well as Caleb Korthals of Milford, Harrison Kim of Con-Val and Rohan Rai of Windham.  In addition,

fully expect Phillips Exeter Academy’s Varun Oberai, Will Coogan, and Connor Chen to certainly factor in with Coogan certainly challenging for the win.

Looking at the team race, Coe-Brown stands out as the strong favorite.  Having knocked down nationally ranked Bishop Henricken last weekend and getting strong support from Carter Sylvester when things were going bad for Dubois, rolling on their home course, the Bears should have the upper hand.  But do not rule out Bobcat Invite Champs, PEA challenging or even defeating the MI45 Champs.  Phillips Exeter won by 12 points over MI45 Small School Champs Oyster River without their #1 Coogan.  Factor him in, and they could give the host school some trouble.  In their first appearance at Black Bear, Pinkerton will be bringing it hard as will Oyster River, Concord, Winnacunnet, and Hanover.  With so many NH ranked teams, it will be the program which recovers the most off of MI45 will have the most success.

**The host school has asked us to remind all those attending the meet to please leave your dogs at home.  It is against school policy to have them on campus. On a perfect early fall day for racing, 20+ teams competed in the 2014 Black Bear Invitational, which features a true, rolling […]