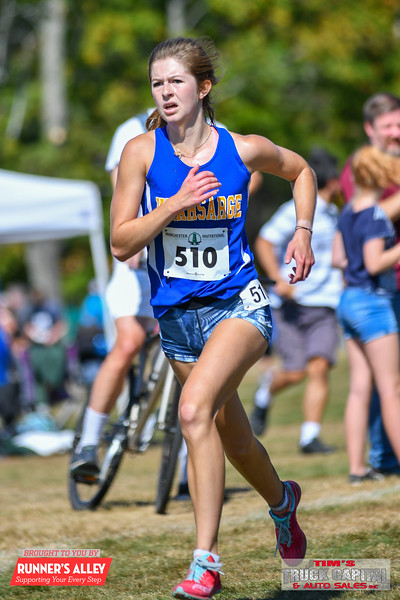 Well this season didn’t disappoint at the top of the girls ranks. Fischer is having an enviable senior campaign and Dube is getting rolling as we get deeper into the season.  But who would have thought after Sophia Reynolds broke out last year, winning D2s, MOCs and second at NEs, that the PrIde would be led by another Sophia (Rubenciuc) in 2019? Make no mistake Reynolds is having a solid year as well, one that has MV ranked 3rd on the girls side in NH.  And let’s not forget Chloe Trudel of Souhegan and Fischer’s teammate Caroline Towle, who both have been killing it of late.

The answer is different.  Some might say you can’t see the forest for the trees and I think in this situation we can recognize that Mr. MacKenzie wasn’t just a force with his legs but with his attitude as well.  Not to say the Concord boys are totally lost without him and BD, as they are fifth in the state rankings, but they are just beginning to create the 2019 version of the Tribe and it’s come with some growing pains.  They are moving in the right direction and look for them to find solid footing in the next few weeks.

How good will Aidan Cox and Coe Brown be?

The answer is really good.  While Cox would be the #1 on just about every team in NH, it’s possible he is the third or fourth best on his own team on any given day.  The Bears are so good that they’ve been represented at the front by three different harriers over the season. Teammates Luke Tkaczyk and Dawon Dubois have been sharing the spotlight with Cox this season.  With Wyatt Mackey and an inspired season by Carter Sylvester the CB Bears are having a season I don’t even think they imagined.

How about 2018’s surprise girls team of the year Salem

Salem has had a bumpy road this season compared to last year’s dream season.  The ladies have taken their lumps but I suspect while they currently reside outside the top ten that come MOCs it’s possible we see the type of run they had last year.  As they say talent doesn’t go away, so I expect the Blue Devils will find their footing again as we get into championship season.

How about Dylan Kahlil and Sanborn?

Khalil and Sanborn got off to a very prosperous start, finishing a very close second to ConVal and ahead of current #9 NH ranked Windham at their home invite.  Dylan and younger brother Jared finished third and fourth and looked to be on their way to climbing the D2 ranks as a team. Since 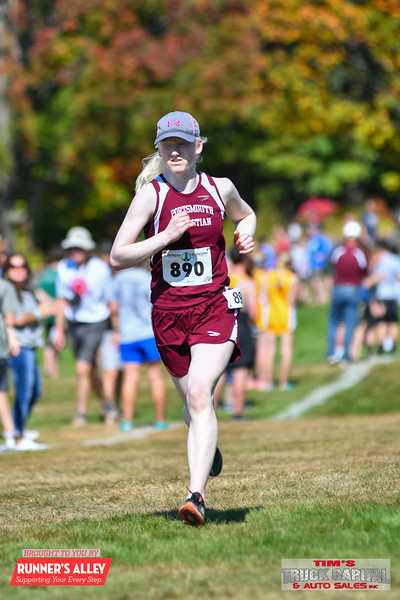 then, Dylan has been sidelined as Jared has had a breakout freshman season finding himself challenging some of the top boys in the state.  Hopefully Dylan will be back in action for the divisionals, and if so, Sanborn could find itself in the mix for a MOC berth.

How about the D1 race this year between Joe Curran and Jake Velazquez?

It seems we’ll get to see this showdown when we get there.  Rory Curran has been putting together a very solid senior campaign and enters the championship season ready to go.  Velazquez and Keene tend to mix it up in Vermont and Massachusetts for most of the season, making it difficult to get a good bearing on exactly what level they’re running at, but Velazquez has been crushing the competition and breaking some course records along the way.  Toss in Colin Donnelly of Winnacunnet and Luke Brennan of Pinkerton and you can bet the race up front in D1s will be a battle.

Being a D3 guy, I’m particularly interested in the Belmont teams and the PCA girls.  In our division, three studs are gold

Liza Corso and Brianna Malone have been running in lock step most of this season with older sister Ella Malone adding to that top three for PCA.  However the elder Malone was absent from the Cougar Classic and PCA failed to run enough girls to factor in the team results. If they can get healthy and shore up the back end, they could find themselves with a team on the start line at MOCs. In a different situation is Belmont coach Scott Clark.  Belmont essentially started from scratch this August and it showed.  But while the starting point was further back than Clark is used to, his team has been improving all season long.  Mark my words, it won’t be but a few years before we’re talking about the Red Raiders like we do about Hopkinton of old… and new.  The current line up of Emma Rothe, Anna O’Reilly, Cailey and Sydney Stockwell, Hannah Bennett, Clara Locke, Kate Westbrook and Lily Sabol are quite possibly the strongest D3 team ever and should be in the hunt for a New England berth.

Speaking of the Portsmouth Christain girls, my next thought is how good is Liza Corso going to be?

Corso is yet to gain the upper hand in the division, but with Dubie standing atop the D3 ranks Corzo certainly finds herself in good company.  I look forward to her battling all the top girls at Mine Falls come the first Saturday in November. 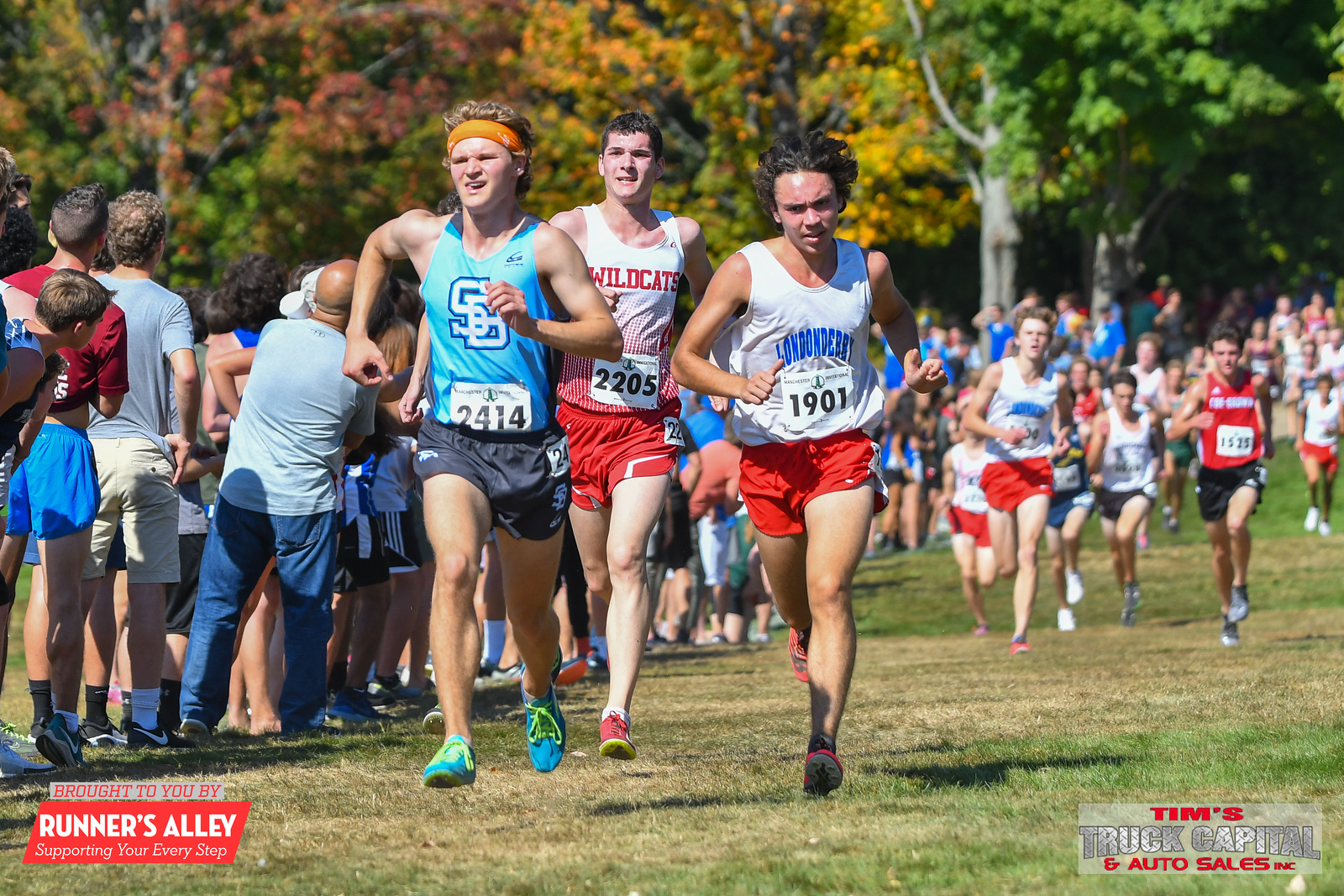 There could be a pretty good battle brewing at the top of the D1 team ranks on the boys side this year.

Keene seems to be the favorite going into Divisionals, ranked #2 behind Coe-Brown in NH.  Londonderry has climbed to the top of the rest of the D1 heap, followed by Pinkerton, Concord, Winnacunnet and North.  Also entering the fray is a rejuvenated Bishop Guertin, led by Carson Bottomley who has been having a great season thus far, insuring an interesting battle for divisional supremacy.

In a sport where seniority usually plays heavy favorites in the boys side, these juniors have really moved the needle in NH.  Vaillancourt and Tkaczyk have set the tone all season with many more experienced runners deferring to them within a race. As a whole, expect these names to make the top twenty-five individuals that make it to New Englands.  Which makes it interesting to ponder what happens when these boys are super 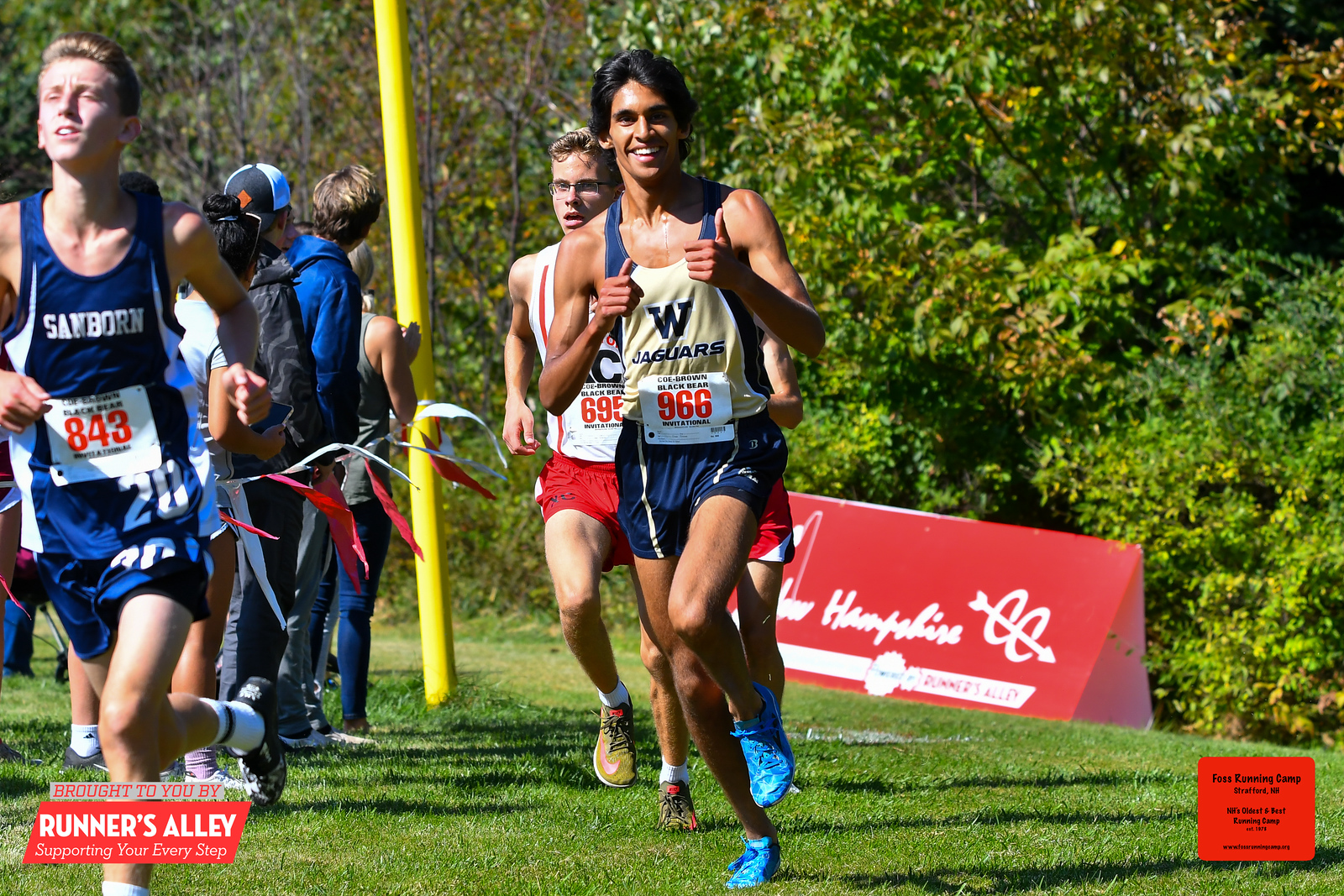 I’m sure I’ve left out some pretty good things to watch!

Like usual, each season brings surprises that can’t be anticipated.  We knew both BG and MV had some talent on the girls side but did anyone thing they would be ranked NH’s #2 and #3?  Souhegan’s move to the top spot? Another Sophia? How about the Windham and Con-Val boys? Obviously I’m quite interested in whether the Mascenic boys squad can go three in a row but that’s more on a personal level. And how about Conant boys?  Certainly we’ll have our hands full at D3s with the Orioles and the rest of the division.