From Meet Management:  MOC course is open for preview, but please be aware of wet spots on the course which may have standing water due to the rains today and tonight. On Saturday, for the 43rd occasion, New Hampshire Cross Country will gather and compete to determine who is the best of the best for 2018.  Whether teams and individuals use this as an opportunity to simply qualify for New Englands (top 6 teams/top 25 individuals) or as their final competition of the season, it is the one time when the best teams across all divisions toe the line, head to head in one race.  The individual NH State Champion is crowned, and although no team championship plaques are awarded, bragging rights for the Granite State’s top team are earned.  Good luck to everyone!

Much like last year, there are 4 teams which can say they are in contention to take the MOCs as they were all within 16 points of one another based on the Divisional Merge.  Of the four, 2 teams have front runners and are more than familiar with the intricacies of Mines Falls, while the other two are true pack running teams, which are more than capable to win if their said packs move up

even 10 seconds.  If last year’s results, when Exeter ‘outleaned’ Coe-Brown  by 3 points is any indication, we are  in for a treat as XC fans for the second consecutive year!  Although Thursday looks a bit wet, Saturday’s weather looks tremendous, which could yield some pretty fast times

Current #1, Souhegan is certainly riding the wave of momentum by sweeping the first 3 places at Division 2’s.  Couple that with the fact they literally crushed Mines Falls at the Pelham Invitational with an 18:47 average back in early October and one would think that cements them as solid favorites.  Chloe Trudel’s 17:51 there assures her a very low, single digit number along with Gerogia Jones and Mackenzie Hayden, who both should finish well within the top 15 or so. The Sabers will be tough to beat considering the type of race MOCs is, which favors teams with low sticks, and course experience.

A scant 1 point behind Souhegan in the divisional merge has to be one of the larger surprises of the season with #2 Concord.  Based on strong pack running (34 seconds at D1s), the Crimson Tide claimed their first D1 title in 16 years by beating another front running team in Bishop Guertin.  Led by Morgane Orcutt, freshmen Sophie Hopkins, and sophomore Katherine Kennedy, Concord is young and courageous enough to pull this off.

The next pack running team, #3 Coe-Brown, surprisingly finds themselves just 10 points away from Souhegan after a gutsy performance at D2s.  Led by Abigail O’Connor’s 19:26, the Bears launched themselves into contention at D2s as they finally had their full compliment of runners racing.  With Addison Cox, Sheldyn Fisher, and Mallory Taylor, the Bears had their top 4 scorers in within 35 seconds of each other. and have the same avg time as Concord.

Bishop Guertin, the D1 runner-up last week, is the other front running team led by individual race favorite D1 Caroline Fischer and D1 runner-up Caroline Towle.  They seem to be a mirror image of Souhegan with one less front runner as Souhegan occupies three of the top 5 in the merge and BG has 2.  Only 16 points off of Souhegan at the merge, don’t be surprised if BG jumps up to the top or at least the top 2 as Mines Falls is their backyeard!

The battle for the final two qualifying spots (top 6 teams qualify for New Englands) should be between 3 teams. Exeter, the defending champs are 5th in the merge on a hilly, challenging course in Derryfield, but don’t forget last year when they surprised many by treating the MOC course like a track and stealing the title.  With an up and coming Ally McFarland, they have as good a shot as anyone to qualify.

Keene is the next team with a realistic shot.  A great pack running team, they were one girl down as they are a little banged up.  Expect them to be at full strength with a healthy shot to qualify.  Also with a great shot will be  Merrimack Valley.  Any time you have 2 low sticks in Sophia Rubenciuc and Sophia Reynolds, you are never out of a large race like this.  If Emma York and company can bring it a little closer, the Pride has a shot.

If any of those 3 falter, look for a pair of D3 schools to really compete for the trip to Connecticut in Kearsarge and Hopkinton.  One might think Kearsarge is a bit better off as Mya Dube finds herself ranked 6th going in.  However, Hopkinton has been steady all year.  If they can move their pack up slightly, they will be in the thick of the fight as well!

BG’s Caroline Fischer, posted the fastest time last week of 18:16 which was a near 30 second cushion over the next best time.  Coupled with the course being the home, which she literally grew up on, and we have as solid a favorite as one can have.  Look to the D2 Champ, Souhegan’s Chloe Trudel as well as BG #2 Caroline Towle to be the next 2 coming in, but we would not bet against either of them.

Then it gets really competitive as Trudel’s teammates Georgia Jones and Mackenzie Hayden lead a pack which includes Kearsarge’s Dube, South’s Cali Coffin, and MV’s Sophias, all wiithin 17 seconds of one another according to the merge.  Looking to crack that top 10 should be PCA’s Liza Corso and Brianna Malone, CBNA’s O’Connor, Pinkerton’s Meghan Cross, Exeter’s McFarland, Winnacunnet’s MacKenna Whelan and Bedford’s Carly Rinko. 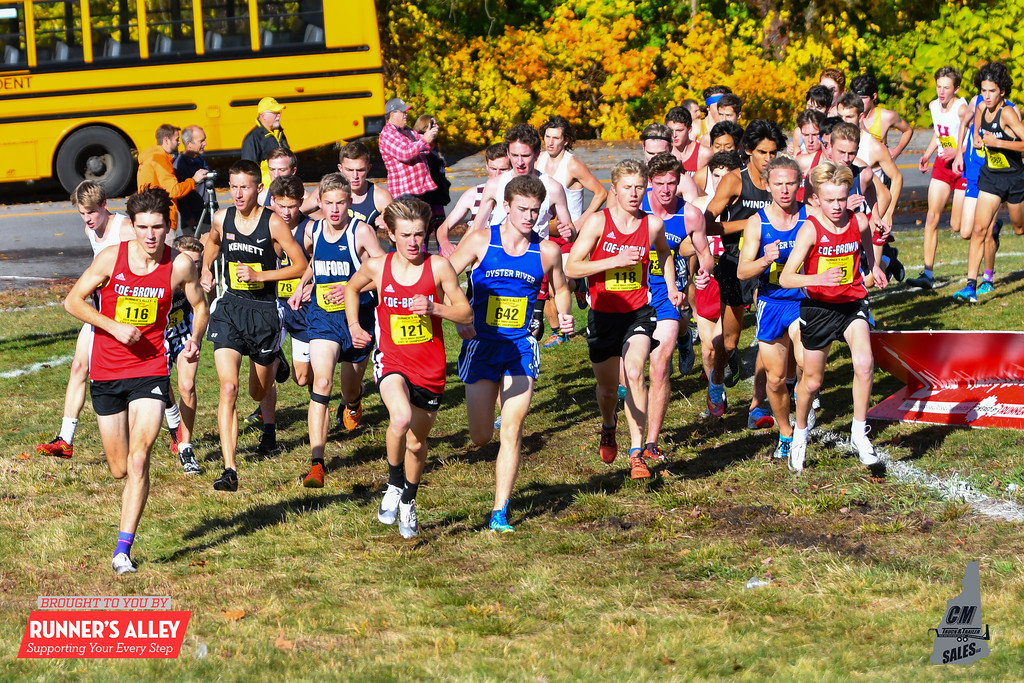 swept the top 3 places at Division 1s and averaged 16:34.  They went on to win Meet of Champions the very next week that year scoring 51 points and averaging 15:53.  One can only see similarities with the 2019 Coe-Brown team as they also swept the top three at D2s and averaged 16:17.  With D2 Champ Luke Tkaczyk, Dawson Dubois, and Aidan Cox, the Bears have a top 3 that can run with anyone.  Throw in Wyatt Mackey and the dependable Carter Sylvester along with solid six and seven guys in Logan Mihelich (16:35) and Patrick Hill (16:47) and the Bears look extremely formidable.  The only question remains is how they perform on a fully flat course and at MOCs since this would be their first ever title.

Once doubted, now touted, the 3-peat D1 Champs and MOC defending champ Concord enters MOCs as a solid #2 and they seem to simply be getting better.  Led by Eben Bragg ,who is the smoothest of runners, the Crimson Tide’s top 5 continues to mix with Brayden Kearns, Ryan Devine, Ryan Ciesluk, Sam Hilts and David Cook.  They are still as deep as ever and as proud as ever.  Watch for them to race with that pride and don’t be surprised if they push Coe-Brown.

Led by pre-race favorite Jake Velazquez, Keene is third on the merge.  Expect them to also come back with a vengeance trying to bridge that 28 point gap between them and Concord.

Pinkerton and Oyster River continued their MOC qualifying streaks and are separated by only 1 point in the merge.  Expect both teams to run even better this week for different reasons.  The Long Red Line has tradition, and typically run solid over the 3 championship weeks.  They have been extremely consistent this season, trending in the right direction, so look for Luke Brennan, Stephen Connelly and company to make their presence felt.  Oyster River had six of their top 7 PR at Derryfield this season last weekend and they certainly have a knack for vast improvement over at Mines Falls.  Led by their big three of Andy O’Brien, Owen Fleischer and Myles Carrico, expect the Bobcats to be more than motivated to do well this weekend.

With the 5 aforementioned squads looking pretty comfortable to head to New Englands, that leaves 1 spot left for which 3 teams seem to have the best shot.  Beginning with NH#6, Winnacunnet, which sports three major players who have the ability to grab low sticks in Colin Donnelly, Jack Taylor, and Noah Taracena.  In spite of losing their third man for the season, Londonderry performed well last week to extend their incredible MOC streak to 30 years!!!  Wow!  Expect Ryan Young, Matt Griffin and company to continue to trend upward!

Finally, home team, Nashua North always seems to have a knack of surprising people at MOCs.  2017 ring a bell???  Expect Rory Curran and Yassine Jakib to lead the way.  If any of the previously mentioned teams should 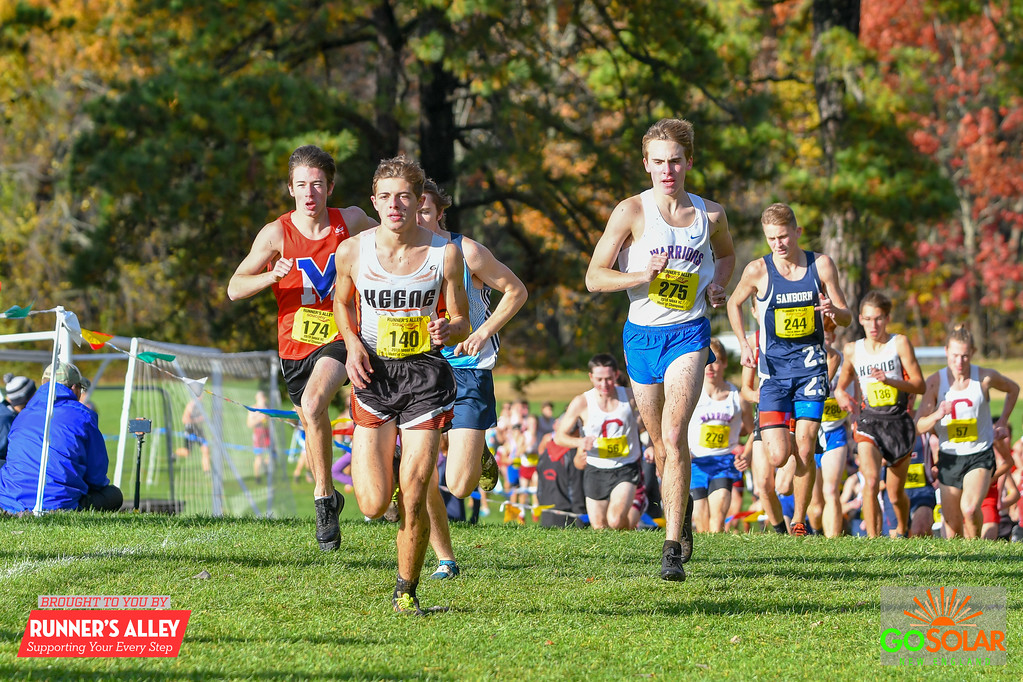 falter, don’t count out Hanover, Windham or Merrimack to move up!

Last year, Forest MacKenzie and Jacob Winslow dueled throughout the first 4000 meters when MacKenzie’s strength allowed him to steadily pulled away from the miler with more speed.  Well, this year’s race is shaping up to be a bit similar.  Can Keene’s Velazquez, the strength runner, do the same to North’s Curran, the miler with superior closing speed?  They do have the top 2 times from Derryfield in 15:32 and 15:48.  They did go out in 4:55 on that course. What pretell will they do for an encore on the flat and fast Mines Falls?  What about D3 champ Landen Vaillancourt?  Certainly a strength runner, will he adopt, perhaps join Velazquez, in pushing the pace attemptiing the zap the kick out of the closers.  Then the question of the D2 guys.  That race went out much slower in Manchester, 5:24 or so.  How much did that effect Tkaczyk’s, Cox’s and Dubois’s times????  Can they join the front pack as they have done the entire season? Will the flat course benefit a Jared Khalil of Sanborn, a Rohan Rai of Windham and of course Oyster River’s O’Brien, Fleischer and Carrico.  Head on over to Mines Falls Saturday afternoon to find out!  This is what cross country in New Hampshire is all about!!!  Let’s Gooooooo!!!!

Good luck to everyone!

On Saturday, New Hampshire Cross Country will gather and compete to determine who is the best of the best for 2015.  Whether […]