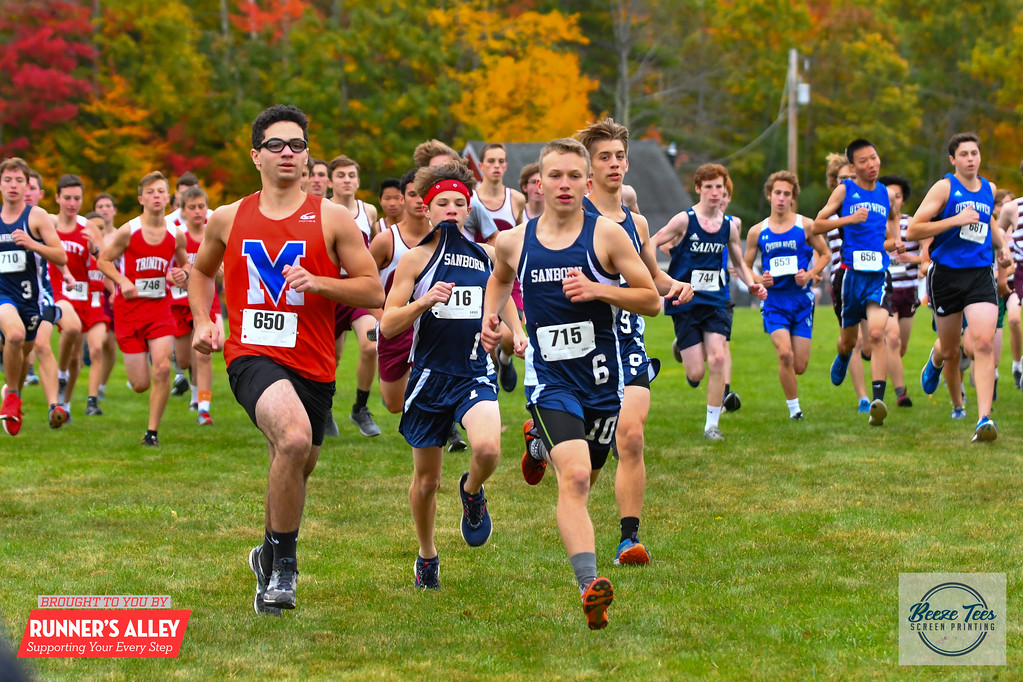 The ninth week of cross country started with the majority of the team traveling up to Manchester to practice running the state championship course. We ran a three minute on/three minute off workout to get a feel for the course at a quicker pace. The weather was crisp and cool, with the autumn sun making the leaves glow golden and red (Fingers crossed that the weather will be that beautiful come states). After the workout, a group of us wound up at KFC for some post-workout chicken and potato wedges. The meal of champions!

Tuesday was an easy run for the varsity team, and a couple 200 meter repeats for the JV boys, who had their state championship the next day. This easy run was quite the adventure, with the girls team trying to film a revolutionary war themed video in our infamous boat, and the Black Hammer Tribe (the boys team) hijacking the video, stealing our shirts, and hiding them in the woods. Along with some other antics involving tubes, it was an enjoyable run. I think everyone’s favorite type of run is the type where we’re all together as a team, joking around and going on adventures.

On Wednesday everyone ventured up to Coe-Brown for the boys JV team to compete in their state meet. While we waited

for their race to roll around, the girls and boys varsity squads ran down the scenic Northwood Meadows to run a quick negative split run. That whole area had some beautiful foliage, making for a picturesque running spot. Shoutout to the Campbell team for also running down there! The boys JV team did incredible, all of them running their PR for Coe-Brown’s course. It was an exciting race to watch and they made all of us proud. Congratulations boys!

Thursday was “pumpkin chucking day,” a day the whole team had been looking forward to. We ran up to the good ol’ Nussdorfer nature area to “sacrifice” the pumpkin the boys had won from the Derryfield meet. Mascenic cross country is filled with adventure after adventure!

Friday was our long run for the week, ending the ninth week of the season on a high note, each day coming closer and closer the championship.

Also! Quick shoutout to our middle school counterpoint, Boynton, for performing phenomenally at the Tri-County Championships, with the girls team taking first place and the boys gaining third. Congratulations, Bulldogs!

The final week of Mascenic Cross Country started off fast with the River Road Mile. The River Road Mile is an annual workout of the Mascenic Cross Country team that takes place on the Monday before the state championship. It’s a good way to see how far you’ve come physically since the start of the season. The majority of the girls team got their PRs for the mile that day, including Quinn breaking 5:30 with a time of 5:29 and me, finally breaking 6:00 with a time of 5:55. The boys did excellent as well, with many of them gaining their mile PR. After ripping that mile, there was an option of one to two 800 repeats at a lighter pace than what we just ran. I for one felt like my legs were made of rubber and had a blister on the verge of exploding, (just cross country things, amirite?) so I opted to just do one 800. It was an excellent workout and I think it helped boost morale for the upcoming championship meet.

The next day was just a simple easy run, followed by the girls team continuing the tradition of buying a pumpkin to make pies from scratch, and gorging ourselves with a Taco Tuesday feast. It was a really great time, and we managed to make six pies, which would come in handy for the team dinner the following day.

Wednesday was our workout of the week – 300 meter repeats at the same pace we had done them earlier in the season, but two less repeats than we had done previously. We were joined by the eighth graders for this workout, so that they could get a taste of what high school cross country was like. Despite the track

being a little more crowded than we were used to with the extra bodies, the workout went smoothly.

That night was also the annual team dinner. Everyone goes to Smith’s house to stuff our faces with pasta, garlic bread, and salad. After eating, we gather into a group in the basement where Smith shares some words of wisdom to get us inspired for the meet on Saturday. The seniors then present speeches to the team, talking about their cross country experience and what running means to them. There were some heartfelt speeches from Byron, Zack, and I, with a good balance of humor and melancholy. While I was reading my speech and listening to Byron’s and Zack’s, I came to the realization that cross country has the ability to shape lives and create memories in ways that other sports never will. As I said in my speech, I’m so thankful for what cross country has done for me, and hopefully, reader, you’re thankful too. Once the speeches were over, it was time for dessert, including the girls’ pumpkin pies, pumpkin bread from Ryan O’Shea(‘s Mom), and chocolate chip cookies courtesy of Connor and Drew. The night concluded with the boys wrestling in Smith’s living room and, luckily, everyone survived. A quality night.

Thursday was our “long run” for the week. It was shorter in comparison to the rest of our long runs throughout the season, as we were beginning to “taper” as Saturday creeped closer and closer.

The vibe of Smith’s classroom on Friday could be chalked up to two words – excited and anxious. While we were all looking forward to competing the next day, there was definitely some nerves, particularly on the

girls’ side of things, about how we were going to do. After a quick race prep day that consisted of thirty minutes easy, we all went home to get some rest before the big day to come.

Saturday. State Championships. Today was the day where we would compete to see if our hard work over the season would reap a reward. The bus to the meet was a few minutes late, only amplifying that pre-race anxiety, but we arrived right on time. Fortunately, the weather was perfect, nothing like last year’s bone-chilling conditions, so we didn’t need 5 layers of clothes or an ice fishing tent. I think that fact helped ease some nerves.

The girls’ team ran first. Before the race, a bee landed on my nose and I had to swat it away, seconds before the gun sounded and everyone took off from the line. The Derryfield Park course tends to do a number on many of our girls. Quinn, Syd, and I definitely didn’t have the races we wanted to. Regardless, we still ran strong and were able to get quicker times than at the Manchester invite weeks before. Maya, however, had a phenomenal race, getting a PR on the brutal course, and finishing just behind Quinn. Victoria, too, had a good race, improving significantly since the last time we ran on that course. Molly and Charlotte also ran well, especially considering neither of them had raced the full course before, and they made us all proud. We were hoping to sneak into the 5th spot this year and move onto Meet of Champions. But, that dream was thwarted, as we placed 7th overall, the same as last year despite running faster times. The competition was fierce for girls’ this year, and although I’m disappointed that we

didn’t make it to Meet of Champions, I’m still proud of us and what we’ve accomplished. And congratulations to the Kearsarge ladies for getting first!

Our boys’ weren’t going to let us be sad for long, though. They all ran excellent races, with the top seven all finishing in under 19 minutes, and Landen winning the race overall. It was an incredible feat to watch, and there was doubt that they were going to be the number one Division 3 team for the third year in a row. Congratulations on kicking @$$ boys! I’m super proud to call you all my teammates and I know the rest of the girls are as well!

The end of the season was bittersweet – bitter for the girls’ team not achieving their goal, but sweet in the boys achieving their’s. I can’t wait to watch the boys compete at Meet of Champions, and I feel very fortunate to have had a great last season. 5:30am. My alarm goes off. I fall out of bed into my sneakers and running clothes. Drowsily, I stumble out my door […]