Annually, the New England Cross Country Championships provides exciting, high level cross country full of confirmations and surprises!  The field is comprised of state champions and hundreds of runners of the same ability level all with the same goal in mind!  Last year the story was the weather and most challenging course conditions resulting in our top teams having a rough day finishing no higher than 7th.    While this year, the course and the weather cooperated, this was still New Englands, one of the most competitive meets in the country.  NH performed much better as teams placed as high as the top 3 and our top individual runners made their presence felt in the top 10.

The girls race led off the day with all the state champions going to the front including defending champ Kate Wiser (Pomperaug), Sofie Matson (Falmouth, ME), Caroline Fischer (BG), and Mari Noble (Greenwich, CT).  At the mile, a

Over the middle mile, a downhill followed by the infamous Green Monster, Matson, Noble and Wiser gained separation and Fischer was battling with the leaders of the chase pack racing courageously with her teammate Towle while Trudel was also looking very strong.  In the end, it was Matson’s day as she strode away from Noble and Wiser to win in 17:52 to Noble’s 17:57 and Wiser’s 18:09.  Trudel would win the chase pack finishing 4th in 18:43 with Fischer and Towle placing 7th and 8th  both in 18:47.

Teamwise, Concord (NH-3) made it 2 weeks in a row placing 3rd, but this time it was at New Englands!!!  The Crimson Tide, once again used a tight pack time to amass 219 points placing behind race favorite and defending champs, Champlain Valley Vermont (142) and Hall, CT (173).  Led by Morgane Orcutt, Concord had a pack time of a minute, and more importantly 30 seconds between their top 4.

Though the conditions were nearly perfect this year compared to the rain soaked mud fest held at Derryfield last year, the race produced generally similar results. The race is made up of New England’s finest runners minus Massachusetts.  It is the 6 best teams and the top 25 runners from each state who qualify for this race.

The race favorite Conard’s Gavin Sherry of Connecticut (last year’s NE runner-up) went to the front of the lead pack as expected and just kept the pressure on his fellow competitors.  Undefeated all season Sherry planned on keeping his streak alive. His biggest competitor Robbie Cozean of Xavier, CT, last year’s national champion in the 5000 meter, tried valiantly last week in the Connecticut State Championships to upend him, however unsuccessfully.  This week looked much like a rerun, ending with Sherry powering up over the hills and ripping through the finish winning rather easily with a time of 15:30 over Cozean 15:34 once again. La Salle’s Jack McLoughlin of Rhode Island finished 3rd for the second year in a row in 15:35.  Maine State Champion Lisandro Berry-Garivia of Mt. Ararat finished 4th in 15:42.  He was 6th last year. Evan Reynolds of Bishop Hendricken RI was fifth in 15:43 with Will Shaugnessy of Brunswick ME finishing 6th in 15:45.

New Hampshire Division I Champion and MOC Champion Jake Velazquez 15:47 was in 2nd place with 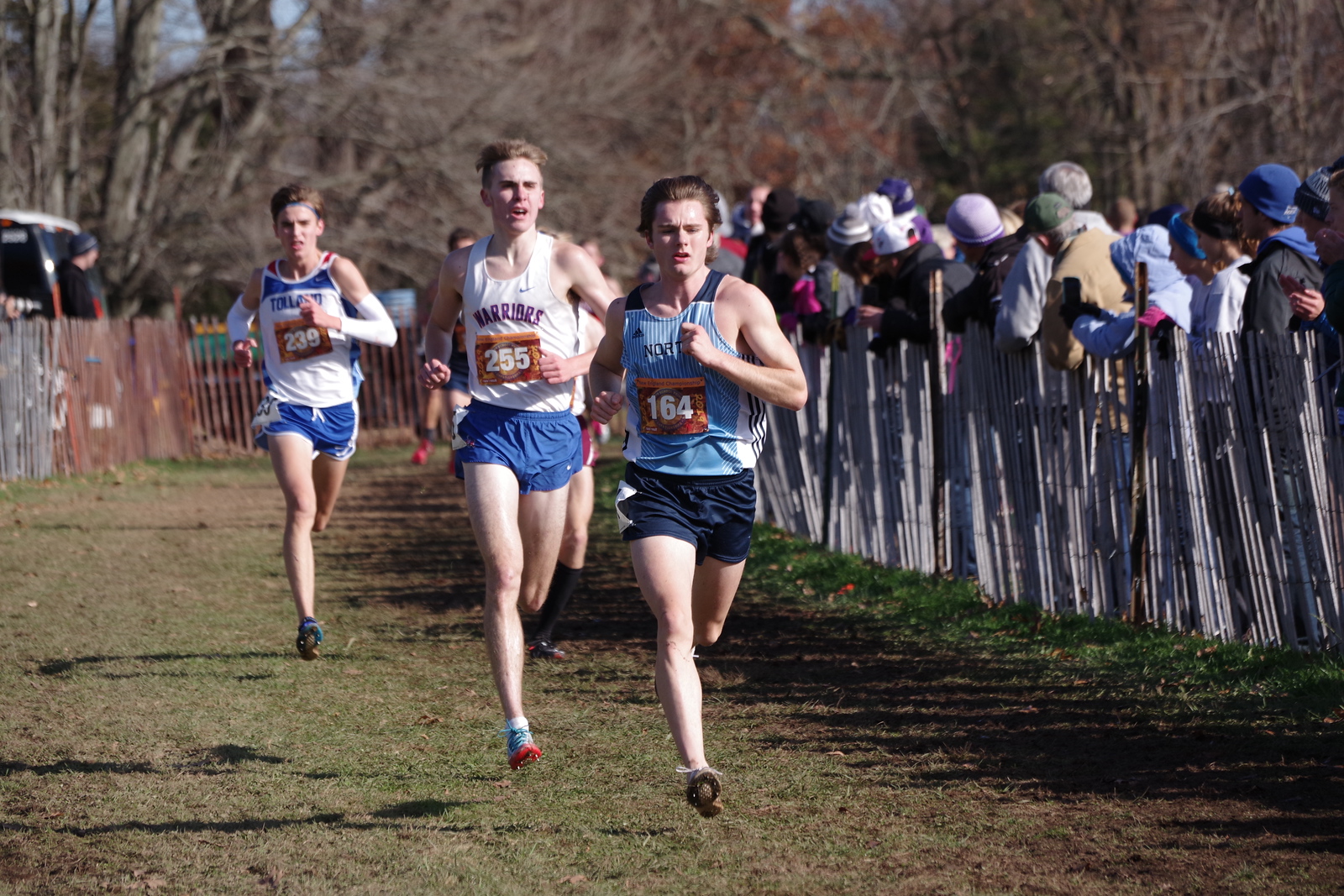 about 1000 meters to go until he got overtaken finishing in a very respectable 6th place. Vermont State Champion Henry Farrington 15:53 of Essex finished 8th just ahead of Nahua North’s Rory Curran 9th in 16:05.  Winnacunnet’s Colin Donnelly placed 12th in 16:10 to join NH’s Velazquez and Curran in the top 25 securing All New England Honors.

Currently ranked 6th in the country defending New England Champion LaSalle easily won the team title scoring 89 points despite not even running their team leader and 3 time top 5 New England placer Max Dimuccio.  Bishop Hendricken 138 points finished in second place matching last year’s effort, incidentally they went on to place 4th in the country in 2018. Only one point from being runner-up was

With LaSalle down a man and having narrowly defeated both nationally ranked Bishop Hendricken and Connecticut State Champion Tolland earlier in the season, high hopes for a New England Championship were dashed for the Coe-Brown boys. After dominating all of the competition all season, beating both both Hendricken and Tolland along the way, they finished a 4th with 167 points. Although this was a large improvement from last year’s 11th place performance, this was not the result they expected. Despite the heartfelt disappointment, the the boys vowed to learn from this setback and move on to the next challenge in three weeks at Nike Norhteast Team Regionals.  Keene finished a solid 7th place while Pinkerton finished 9th and Londonderry 10th  making it 4 NH teams in the top 10.  This is definitely an improvement over last season when only 2 teams finished in the top 10.  NH seems to collectively be  a year away.  We will see everyone in 1 year at Thetford!!!  Congrats to all!