With 17 teams attending, the 2021 Bobcat Invitational at DeMeritt Hill Farm marked a return of a NHCC beginning of the year tradition!  As always, the folks at

Oyster River and DeMeritt Hill Farm were gracious and incredible hosts.  Great job to all event organizers, volunteers, coaches and athletes.  Competitively speaking, the course at DeMeritt is a tough, hilly adventure! An athlete most likely will not run their best ever time there.  But, an early season test which proves who truly has done their summer homework.  We will be posting pics, videos and interviews once completed to both this post and the Bobcat Invitational Meet Hub.

The girls JV race kicked off the day promptly at 10:00am.  Reigning D3 champs, Hopkinton made their presence known as Amelia Walsh won in 23:55 and her teammate Elizabeth Trafton placed 3rd in 24:30.  However, it was D1’s Bedford who took home the team win by placing all 5 scorers in the top 10 scoring only 30 points.  Samantha Ducharme led their charge placing 2nd with her teammates Paige Zimmerman, Lauren Porthuru, Sydney Santiago taking places 5-7 while Ava Underwood completed their scoring by placing 10th.  Concord’s Phoebe Dater-Roberts and Morgan Doherty placed 4th and 8th while Dover’s Luisa Pelletier placed 9th to complete the top 10. Team-wise Concord was 2nd with 57 points and Hopkinton was 3rd with 70 points. 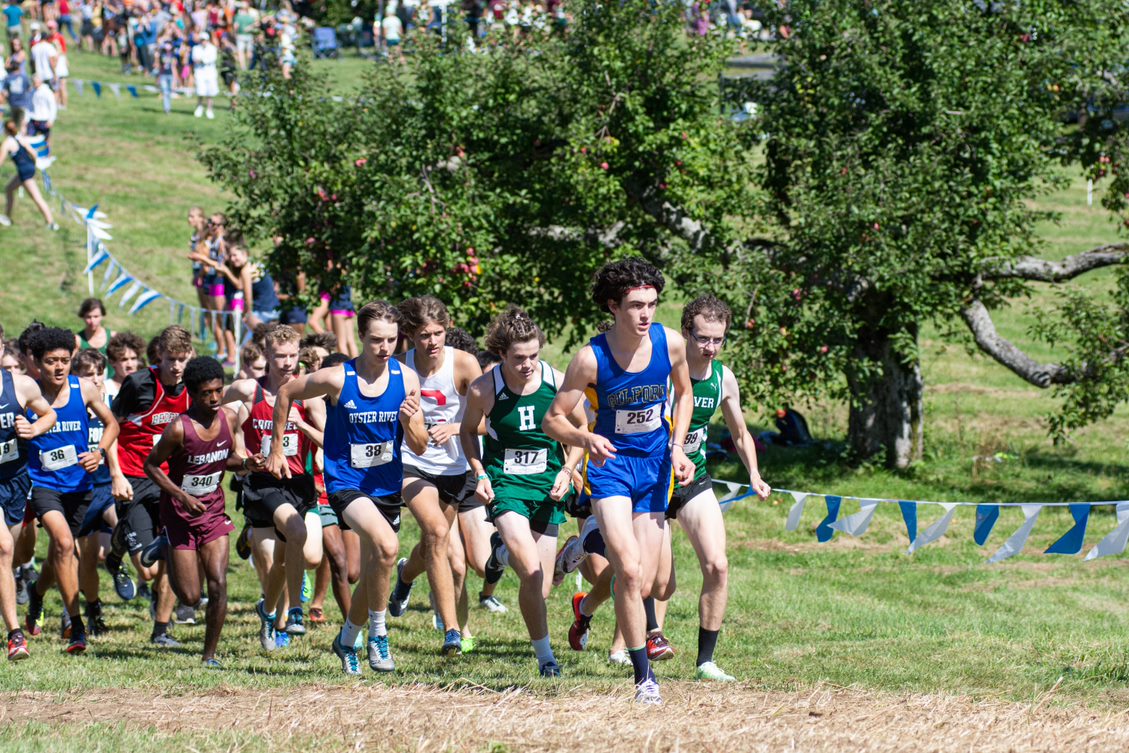 The boys JV race was much closer between the teams as the top 3 teams were separated by 14 points with the top 2 separated by only 4 points.  The individual top three mirrored the team place of finish as Exeter’s Nathan Mikulsky led the Blue Hawk’s to the victory winning in a time of 20:20, while Oyster River’s Cole Harwood placed 2nd to lead the host Bobcats to the runner up position.  Concord’s Colby Bettens was third and yes, so was his team.  Harwood’s teammate Micah Bessette put Oyster River in the lead through 2 runners with Concord’s Matthew Hooper 5th.  Exeter countered with Aidan Kostandin and Jack Fabiano placing 8th and 9th respectively while Oyster River’s William Carrico rounded out the top 10.  Lebanon’s Griffin Urnezis and Bedford’s Berkley Alderton broke up back forth between the top three teams.   In the end, it was Exeter 47, Oyster River 51 and Concord 61.

The girls varsity race may indeed be a harbinger of things to come this season.  A changing of the guard if you will as freshmen and a new team topped the podium.  Dover junior Brooke Marshall, in just her 3rd 5k, led essentially from gun to tape, but was certainly pressured by a hard-charging MacKenzie Cook, another freshman from Oyster River.  Marshall won in 20:12 with Cook hot on her heels crossing the line only 3 seconds behind in 20:15.  After battling over the hills for just over 3 miles, Hopkinton’s Hannah Bennett out-leaned Exeter’s Caitlin Murphy, both timed in 20:35.  Another Bobcat freshman gave the host school the early lead as Haley Kavanaugh placed 5th in 20:42.  Bedford’s Fiona Lee  won a battle with Concord’s Molly Nyhan (7th) and Alina Pincoske (8th) to take 6th in 20:52.  Exeter’s Ali McFarland placed 9th in 21:02 right in front of Dover’s Isabel McIntyre and Ashlyn Smith as the Green Wave began to take hold of the team race by placing 10th and 11th respectively with their teammate Alyson Bortz right behind them in 13th.  Their fifth scorer, Brianna Haley solidified their victory placing 19th to complete their scoring at 52 points. This was a 24 point victory over runner-up, D3 reigning champs Hopkinton which placed 5 in the top 21 to total 76 points, 12 points ahead of 3rd place Concord. While the top of the podium changed with the girls varsity, we saw familiar faces take the wins in the Boys Varsity race.  Beginning with the individuals, Gilford’s Patrick Gandini set the early pace from the gun daring anyone to go with him; however, no one took the bait as Sanborn’s Jared Khalil, Lebanon’s Birhanu Harriman, Concord’s Sam Hilts and Zachary Hooper formed a patient chase pack.  It was Khalil who began to tow this pack midway through the course cutting into Gandini’s lead.  By the 2 mile mark, the course was taking its toll, but it looked like Khalil would catch Gandini, which he did on the downhill portion prior to the final uphill.  But it was Gandini, from the mountains of Gilford, who powered away up the final hill building a gap to take the win in 16:26.  Hilts, who ran an incredibly patient race would overtake the gutsy Khalil to place 2nd in 16:32 to 16:35.  Harriman would win a neck and neck final orchard battle over Hooper 16:43 to 16:44.

It was also a familiar team atop the podium as Concord took the win with 49 points on the strength of Hilts, Hooper and John Murphy’s 7th place finish.  With Liam Gleason and Tyler Watt both coming in the top 20, Concord held off a spirited Oyster River squad.  The Bobcats used tremendous packing with their top 5 of Chris Jernigan, Henry Hagen, Amani Harvey, Dillon Labonte, and Keane Swiesz coming within 35 seconds of one another and placing 9th, 12th, 13th, 14th and 16th.

Great job by all!  Great to be back! With Manchester Invitational this week, many teams take the opportunity to take the Tuesday off.  Coaches please send in your results if […]