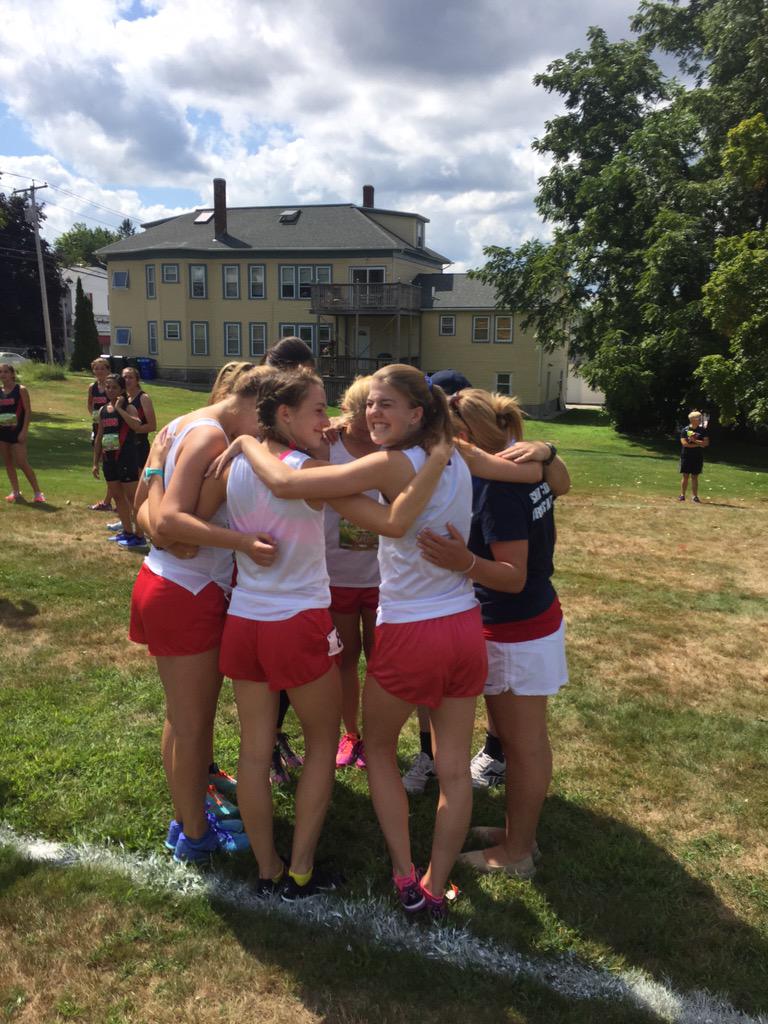 and a number to the state’s top teams took to Derryfield Park. John Mortimer’s Millennium Running event, benefitting the Division Championships and All-State Awards Banquet at the end of the season, takes place over the freshmen course which is a touch longer than two miles in the tradition of the Londonderry Jamboree from which the festival was hatched. Larry Martin started the Jamboree at Londonderry, taking place the day before the season officially opened, with the shorter race designed so athletes wouldn’t immediately compare their early season results with their result from the previous season. Mortimer, coached by Martin at Londonderry back in the 90s, held the course record for a while, a blazing 15:24, until it was broken by none other than Greely, Maine’s Ben True, who has gone on to professional success.  He actually is competing in the World Championships on the track in Beijing, China over the coming week to race in the 5000 meters.

But back on the course, with an A and B Race format for both genders, many of this year’s harriers took the opportunity to bust off the rust and preview the Divisional Championship course. First up was the Girls’ B Race, the ladies took the race out conservatively at first, recognizing the heat was going to be one of the toughest competitors out there. The race was won from the front by Nashua South’s Lauren Robinson in 14 minutes, 11 seconds, who led from the top of the starting hill to the finish. Nashua South easily won the race as well, with Central and Bishop Guertin fighting it out for the second slot.

Now don’t read too much into this as South didn’t run anyone in the A Race and Central only ran four. In the Girls’ A race, Bishop Guertin showed why they deserved to be rank 2nd in the State, easily taking the win. BG’s top five were in the top 13, with 8 runners in the top twenty. Talk about depth! Kalin Gregiore of Londonderry won the race in 13 minutes, 36 seconds, leading her Lady Lancers to a solid third. Surprising second were the Lady Broncos of Alvirne, putting their top five in the top sixteen. Roughing out the rest of the teams, as the meet is not officially scored would be the North and South teams of Nashua and then Division 3 up and coming girls’ team Mascenic. Similar to South, running no one in the A race the Lady Vikings had two in the top ten of the B race and easily outperformed the other Division 3 teams.

In the boy’s races, caution was thrown to the wind, and was fast from the gun. In the B Race, the Mascenic boys had a field day with the competition, with their top four in the top seven led by sophomore DJ Turner in 12 minutes, 46 seconds. While they easily handled the competition in the B Race, Mascenic only ran two in the Boys’ A race. And while both finished in the top ten, Londonderry showed why they are ranked only behind Pinkerton, with their top five finishing in the top 13. They were led by Cameron Dickson (1st -11:07) and Jared Kane (2nd – 11:10.) Sixth ranked North finished solidly in front of Alvirne, but the Broncos showed they will be a force to be reckoned with this season. Merging the results would have ranked Mascenic and Alvirne fighting for that third spot, with Central rounding out the top five.

Along with the high school races, Millennium Running offers a community race, along with a men’s and women’s competitive race that pits some of the region’s best adult racers against each other.   Taking place on one of the toughest courses in New England, running the full 5K course that all varsity racers hope to navigate successfully, those not in high school had their hands full. Whether the high school athletes used the opportunity to test their fitness, bust off some rust, preview the course for the Divisional Championships, it’s safe to say that all participants found the heat and the course to have enough challenge this early in the season. Back to work on Monday, the teams will use the next two weeks to prep for the true competitive season and the end of October.