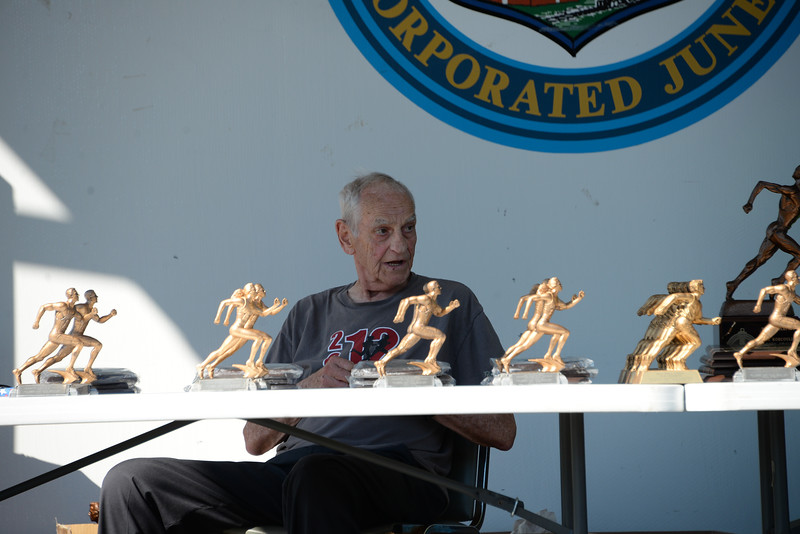 Although defending champion Greely, ME return their top 2 finishers in Katherin Leggat-Barr and Izzy Evans, it seems as if there will be a new Girls Small School Champion.  Last year’s runner-up Harwood, VT returns all seven of their runners from the previous year, and South Kingstown, RI is currently ranked 5th in Rhode Island.   Freeport (ME-11) and Yarmouth (ME-3) will look to contend as well. Leading the NH contingent of small schools should be Hanover (NH-9) and Windham (NH-10).

With both defending champions Coe-Brown Northwood Academy and 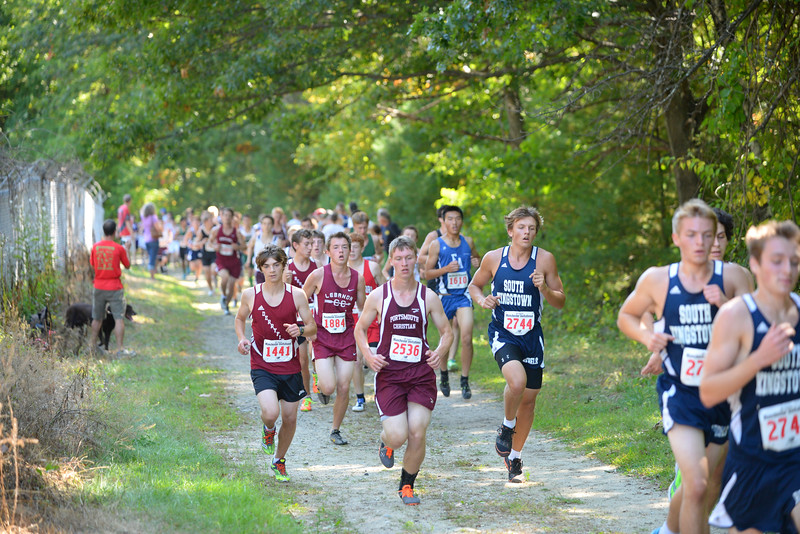 runner-up Oyster River opting for the Large School race, this year’s Small School race is wide open.  Schools ranked in their respective states vying for the coveted title include Freeport (ME-3), Greely (ME-5), Prout School (RI-10) and Yarmouth (ME-10).  Of these teams, both Greely and Prout School placed in the top 6 in the 2014 edition of MI.

While NH may not have a team vying for the overall title, Inter-Lakes’s C 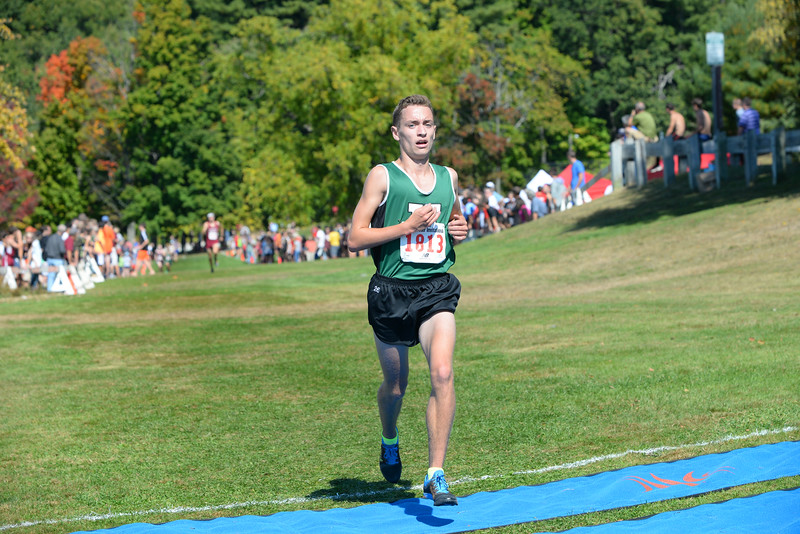 ameron Daly, and Hopkinton’s Dom Repucci should represent the Granite State quite well.  Of these 2, Daly seems to have the hot hand presently.  Freeport’s Chandler Vincent as well as Yarmouth’s Luke Laverdiere should have something to say regarding the individual outcome of Saturday’s race.  However, if we were to select a favorite, it would have to be Daly.

With the removal of the Elite Races, the Large School Race has

become the choice for top teams.  As a result, this year’s race will be a barnburner and presents a real gift to fans and supporters as 11 teams competing are currently ranked in their respective states and any one of 5-6 individuals could take home the individual championship.

Seven of NH’s top ten schools are represented, which means there may be a shake up in the rankings this weekend.  NH #1 Coe-Brown will be competing in their first invitational of the season.  Although they graduated 2 of their top 7 from the 2-time defending Elite Race champs, they return a strong core.  Seniors Elisabeth Danis (19:10), Brook Laskowsky (20:29), Meg Scannell (20:34), and Julia Cormier (20:44) along with junior Alli Pratt (19:33) lead a very seasoned squad which was ranked nationally during the preseason.  However, with an early season invitational, this may see them at their most vulnerable. 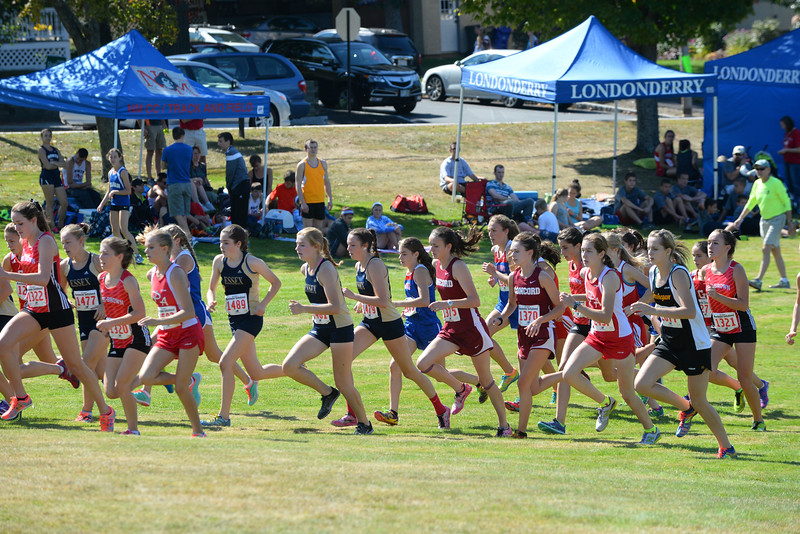 If anyone is to upset them, look to Pinkerton (NH-2) and Champlain Valley (VT -1) as the largest threats.  Even without defending Elite Champion Morgan Sansing (18:53), Pinkerton garnered an easy win at Nashua Invite this past weekend.  Off to a very strong start this season and led by Sansing and Ariel Vaillancourt (20:38), Pinkerton has added much needed depth through the emergence of sophomore Maison D’Amelio and two freshmen, Ciara April and Jordan Vaillancourt (Ariel’s little sister).   Also vying for the top spot will be perennial Vermont powerhouse Champlain Valley.  Led by Jr. Sophia Gorman (19:16) who placed 5th in last year’s Elite Race, Champlain Valley always races well at Derryfield whether it is mid or late season.

Leading the dark horses of the ranked teams should be Souhegan (NH-3), Essex (VT-2) and Burlington (VT-3).  Souhegan is young, deep and steadily improving.  If their pack can move up to the top 20 or so, they can make some noise. Both Essex and Burlington have the luxury of having low numbers in

Emma Farrington (Jr) and Sophie Watterson (Sr.) respectively.  Again with a field of this size, having low numbers, always helps.

Individually, this could turn into a dual between Sansing and Danis.  Both are among the best in New England and both are running very strong right now.  Outside of NH, Vermont’s Gorman, Farrington and Watterson will be in the front pack along with NH’s Jackie Gaughan (Exeter), Leya Salis (Bedford), Cassie Shea (Concord), and Kristie Schoffield (Merrimack Valley). Watch out if Schoffield is around with 100 to go!

The Manchester Invitational is one of the biggest races in New Hampshire cross country every year. Approximately halfway through the season, 8 of the top 10 teams in the state will square off against one another for the first time. Expect to see a shakeup in the rankings with a lot of teams really close together and everyone vying to put their best foot forward on the course where the divisional meets will be held in just a few short weeks.

At the top it should be exciting to watch Pinkerton (NH #1) and Londonderry (NH #2) battle it out again. Last week at Nashua, they put on quite a show going back and forth with Pinkerton coming out on top. Londonderry’s runners were right on Pinkerton’s heels, and with Manchester’s hills offering a very different challenge than Nashua’s flat speedy course, could there be an upset at the top of the rankings? Pinkerton gets the edge after last week, but it might be too close to call between the two Division I titans. Expect them to trade off places and battle each other right to the final 100 meters.

Right on their heels should be Coe-Brown (NH #3). This will be their first

invitational of the season so it’s a little challenging to judge where they’re at, but they’ve performed well at several dual meets and return a really strong squad from last year. Their divisional rivals Oyster River (NH #4) may struggle to match the depth that Coe Brown returned this year but counting Oyster River out would be a huge mistake. They may have the overall race winner on their squad in Patrick O’Brien, who really showed the state he’s someone to watch last weekend at the Bobcat Invitational. Anytime you can start your scoring with a first place it helps keep your score low. 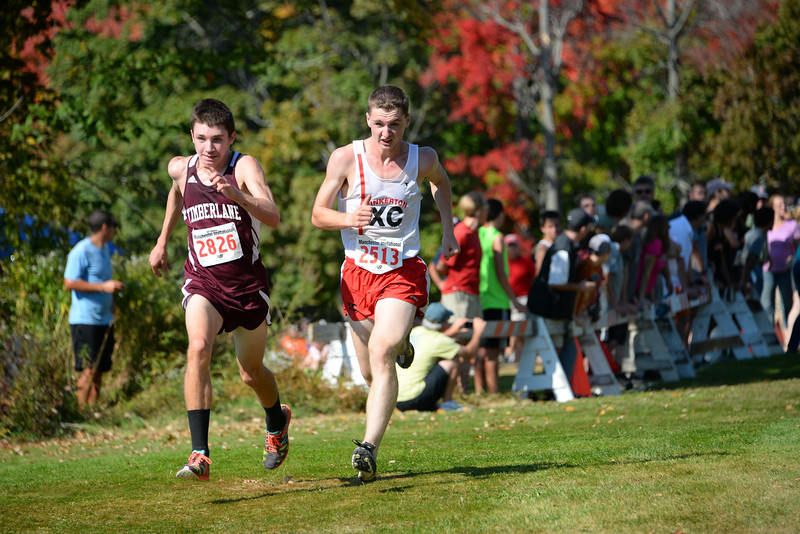 season when we start looking at New Englands. Look for these teams to really push to get into the top 6. Alvirne (NH #7) jumped themselves into the mix with a strong showing at Nashua and picking the order between North (NH #5), Concord (NH #6), Alvirne and South (NH #8) is basically just a guessing game. North has a great pack which can make a big difference in such a large field of competitors. Alvirne and Concord are both very strong up front and if there 4 and 5 runners can improve from last week, they could still beat North. South will be looking to improve after a tough showing last week at Mines Falls and could absolutely move to the top.

Outside of New Hampshire, Brookline (MA #7) is off to a great start. They’ve had a strong showing at a couple of dual meets and will likely be battling for a possible team championship. Also watch for Vermont’s number one Champlain Valley and South Burlington (VT #2) which always brings strong squads. Good luck to all the runners this weekend!