On Saturday, runners from throughout Massachusetts and New Hampshire descended 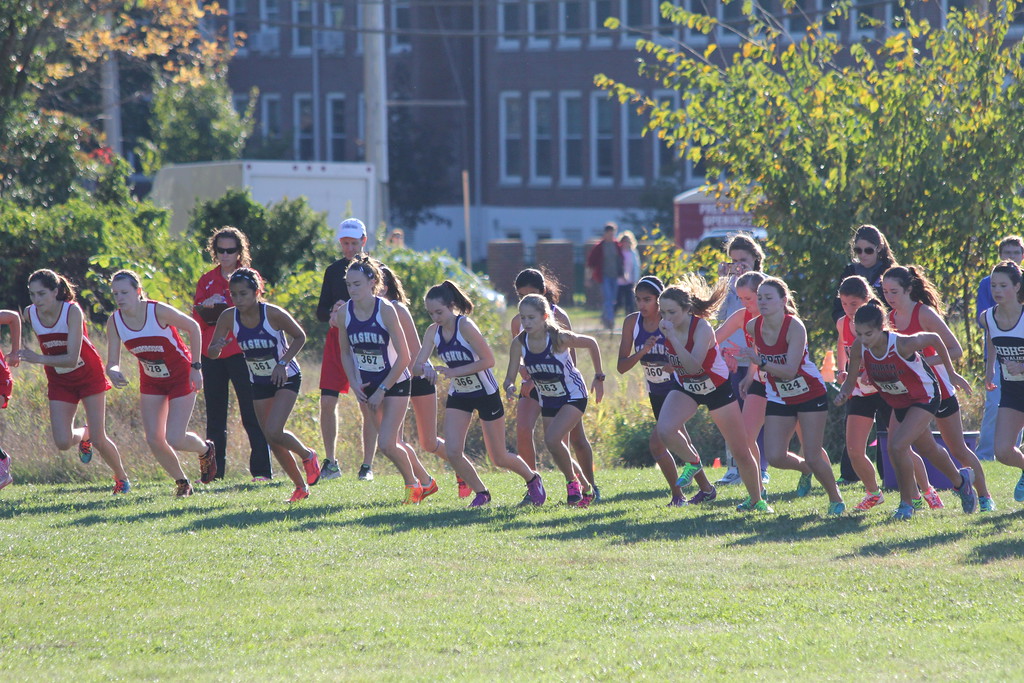 upon the historic 1890’s “Hill House” estate (located directly across the street from Alvirne High School) for the 12th edition of the Battle of the Border Cross Country Meet.

The Alvirne course is a mixture of open pasture fields surrounding the former home of Albert and Ida Hill combined with beautifully groomed and serpentine wooded trails on the property located behind the Hill House. The rains of late last week left a number of muddy spots in the wooded section of the course—to the sheer delight of close to 500 Granite and Bay State runners.

The Girls Varsity race was won by Junior Lily Voke of North Andover who broke away from an early pack of four runners paced by pre-race favorite Jaylan Fraser-Mines of Tyngsboro.  Voke won the race with an impressive 18:57, followed by Emily Wilson of Groton-Dunstable (19:03). Katie Bellomo was the first Granite Stater across the line finishing third in 19:09, with Fraser-Mines in fourth (19:25) and Bellomo’s teammate Jessica Fontaine in fifth (19:28).  Alvirne dominated the 11-team girls varsity field with an impressive 65 point victory, displaying its depth of talent with its five scoring runners all finishing in under 20:21.  Groton-Dunstable was second with 96 points and North Andover finished third with 101 points.

In the Boys Varsity race Alvirne’s Kendall Westhoff ran away early on from the field with an impressive 15:44, breaking the old course record set by Aaron Bellomo in 2012 (15:47).  Westoff’s teammate, and D1 800m track standout (and Aaron’s younger sibling), Noah Bellomo overtook Lowell star Chris Gendron (16:17) just after the 2 mile mark.  Nashua South’s Mitch King was fourth (16:22) and Marshfield’s Andrew Lamb finished a close fifth (16:24).  Defending Mass Div. 1 Champs. Lowell opted to rest its varsity squad this week and ran only its JV squads with the exception of Gendron.

In what may well be a preview of what to expect in a crowded battle for the podium at the upcoming NH Division 1 Meet (along with Concord and North), Nashua South put its depth of talent on display to edge out an equally talented Alvirne squad by just 11 points to capture its first Battle of the Border title.  Following King for South was Ryan Vermette (12th-16:39) and Aiden van Batenburg (15th-16:52), both breaking the 17 minute barrier for the first time.  South’s Corey Hawkins (22nd-17:03) ran a personal best as well brothers Tyler North (17:10) and Ryan North (17:24) –celebrating their birthdays (or is it birthday?) in style. Alvirne’s Richard D’amico posted a solid 16:27. Andover finished in third place with 115 points.