On Saturday, New Hampshire Cross Country will gather and compete to determine who is the best of the best for 2015.  Whether teams and individuals use this as an opportunity to simply qualify for New Englands (top 6 teams/top 25 individuals) or as their final competition of the season, it is the one occasion when the best teams across all divisions toe the line head to head.  The individual NH State Champion is crowned, and although no team championship plaques are awarded, bragging rights for the Granite State’s top team are earned.  Good luck to everyone!

While the merging of the Divisional meets 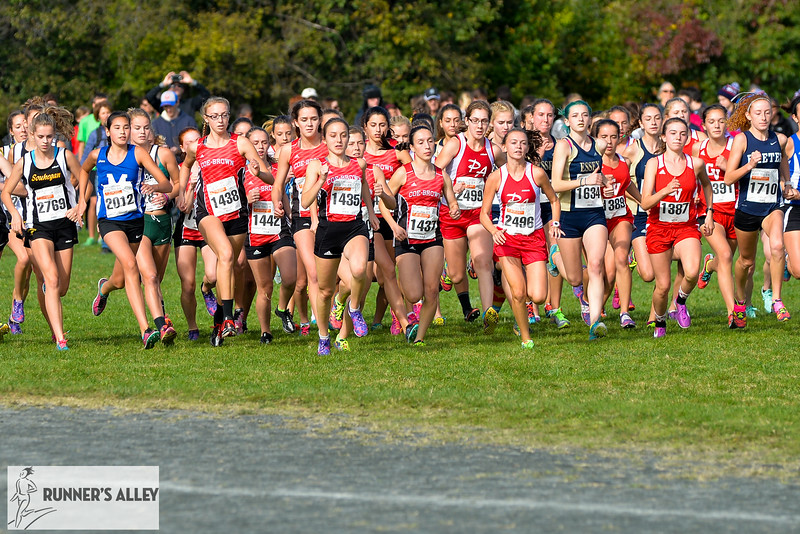 may have taken some of the guesswork out of the Meet of Champions predictions, there are still some intriguing storylines to follow and scenarios to run through for Saturday afternoon.

The headliner story in the Girls race is of course the battle for Top NH Team, which happened to both be ranked #4 and #5 in all of the Northeast. Coe-Brown was certainly the team to beat coming into 2015, and looked likely to add a 5th consecutive MOC crown to their resume. While Coe-Brown has certainly performed as expected, running a crazy-fast team average of 19:06 at the Division Meet, they are currently not the top team in the state.

hat honor belongs to Pinkerton, who beat Coe-Brown head-to-head at Thetford to assume the #1 spot in the weekly rankings, and then beat Coe-Brown on the merge at Divisionals. Of course, a 3-point spread on a merge is essentially a tie, so let the guesswork begin. Coe-Brown has experience on its side, and a lead runner in Elizabeth Danis. Pinkerton had only a 19 second spread for its top 5 at DI’s, and it’s 5th runner was Morgan Sansing, who fell back slightly after running with the top two girls last week. She could be the difference-maker, as she obviously has the talent to improve on that spot. Also, while having 2 inexperienced 9th-graders in your top 5 may be looked at as a weakness, the flip side is the disproportionate improvement that young runners often show. Pinkerton looks like a very tough team to beat, but it will still take a special effort to dethrone the Black Bears of Coe Brown. It may very well come down to the 6th runners, who, surprise surprise, were only separated by 3 seconds at Derryfield.

After the top two, who are head-and-shoulders

above the rest of the field, things get a bit murky. Bishop Guertin (#3) and Hanover (#4) are the next two teams in the merged results, only 4 points apart. BG is led by top ten potential Chloe Conway, while Hanover boasts a strong front 3-pack of Hannah Wittmann, Sadie Lingelbach-Pierce, and Leila Trummel. Hiding back a little ways for BG is Heidi Ntengeri, who could be a difference maker.

Souhegan, currently ranked 5th in the state, is an interesting case. Usual #1 runner Madeline Hunt was only their 5th runner on Saturday, and could be the ace up the sleeve of Souhegan. With Hunt running at full potential, she has the ability to bring Souhegan as high as a third place finish. Arielle Zlotnick, their early-season 2nd runner, has been out of the results for some time, but if she reappeared they would improve even more.

The next 5 teams are all separated by only 30 points on the Divisional Merge. They include, in order of merge finish, Alvirne (#6), Oyster River (#7), Concord (#8), Merrimack (#9), and Winnacunnet (#10). Of these 5, Oyster River is the most intriguing. Despite being the 7th team on the merged results, they are only 9th in the latest rankings. They of course have Maegan Doody, the favorite to win individually, but more importantly they finished with only 6 runners on Saturday. Missing from the results was their potential #3 runner, Katie Schmitt, who as recently as the John Sanborn (Plymouth) Invitational on October 16th ran a 20:08 on a tough, hilly course. If she runs and finishes, and if Danielle Slavin has another breakout performance like she did at Derryfield, they should be a shoo-in for a top-6 performance and a trip to New Englands. That’s a lot of “ifs”; however, and the door could be open for one of the other top-ten teams to have the race of the day and send a team to Thetford.

is again the favorite to claim top NH female runner status. While it would take an upset and a possible course record to dethrone Doody, there are 3 runners who could take a shot at that upset. From DII, Coe-Brown’s Danis has been racing Doody all year, and shows no sign of making any race easy. As evidenced by her 17:32 at Brown, she has flat course speed. From DI, individual champion and Thetford champion Jacqueline Gaughan from Exeter has been running very well recently, also breaking 18 at Brown, and posting the 2nd fastest time of the day at Derryfield. The third runner is Junior Leya Salis of Bedford, who has already proven her XC speed with her 18:28 at Derryfield, and also boasts

impressive track credentials as a sophomore in Virginia, running a 4:57 for 1600m and 2:13 for 800m. The MOC course just might suit her running style.

After these four, things tighten up in the individual race to place in the top 25. Coe-Brown’s Alli Pratt and Brooke Laskowsky, Oyster River’s Slavin, Pinkerton’s Mason D’Amelia and the Vaillancourt sisters, Ariel and Jordan, Merrimack Valley’s Kristie Schoffield, and Exeter’s Violet Sullivan will all find themselves in a substantial chase pack, vying for a top-10 finish. Don’t count Pinkerton’s Morgan Sansing, Windham’s Susan Poore, or Bishop Guertin’s Chloe Conway out of this pack either.

With some truly remarkable performances

by teams and individuals this past Saturday, the Boys race at Meet of Champions should be a battle of titans. The clear front runner as far as teams goes is Pinkerton (#1), as they put their top seven in the top twenty in the Division 1 race.  They beat a very strong Londonderry team 35 to 98.  With sub 16 guys Nick Sevilla and Noah Davis up front, they should be in the driver’s seat.

The Lancers of Londonderry (#2) should be the pick for the number 2 spot at Meet of Champions.  With a 16:42 team average time, they stand above the rest of the teams running at Nashua on Saturday.  With Cam Dickson (16:00) and Noah Schrank (16:23) leading the way, they could be tough to bet against. 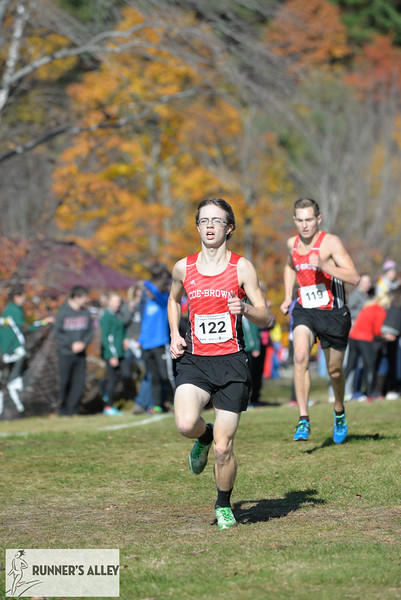 The next two teams on paper would be the Black Bears of Coe-Brown (#3) and crew from Oyster River (#4).  Both team averages put them just under the 17 minute mark and ahead of the rest of Division 1.  However these teams might be much closer to the #2 spot than those averages suggest.  The Division 2 race went out conservatively as the D2 top man Patrick O’Brien slowed the pace down to give his teammates an opportunity to stay at the front.  Chances are that the Meet of Champions race will go out much quicker with both teams creeping closer to the top.  The scoring format with all divisions combined favors Coe-Brown, but both teams have a shot of upsetting the Lancers.

The next New England qualifiers should come from Division 1. In a very close divisional race, the Panthers of Nashua South (#5) squeaked out third in a very tight race, 153 to 156 to 168 over Nashua North (#6) and Concord (#7).  South and North should have a slight advantage over the rest of the contenders as the course will feel very familiar to them.   North 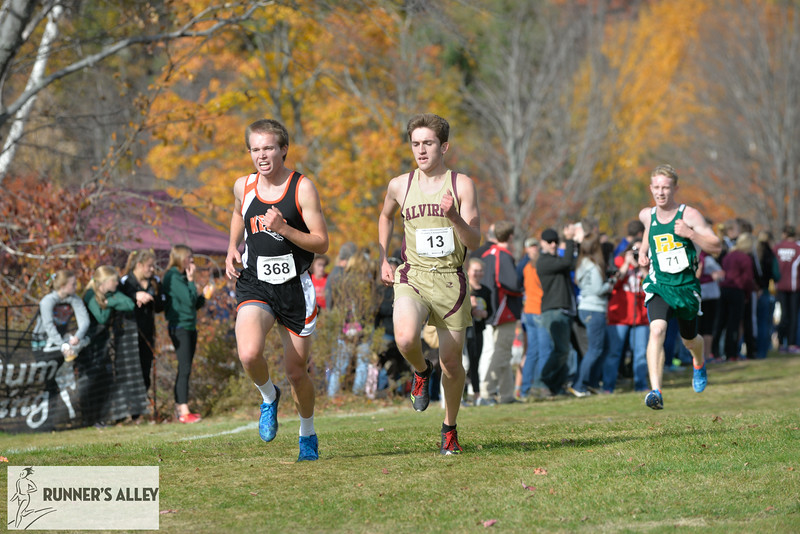 may fare better as their grouping is much tighter but with no low stick and a much more loaded field, we’ll have to wait and see.

Other potential challengers for a top six spot could come from Alvirne (#8), Keene (#9) or Timberlane (#10).  Timberlane has the contributions of last week’s fastest runner in Liam Kimball and where every point counts, the Owls might have the upper hand.

Looking for a true dark horse pick, the Kennett Eagles or the Mascenic Vikings might be your pick.  Kennett finished third in Division 2, behind two teams that have a chance to beat many of the teams in Division 1.  Mascenic, which finished behind the Kearsarge Cougars in Division 3, had a faster 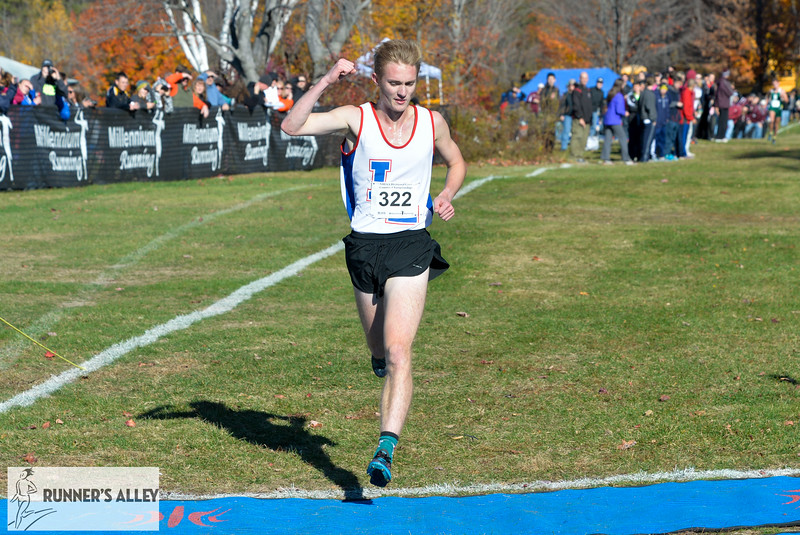 Individually, look for a true battle this year. Last year, Souhegan’s Eli Moskowitz was the class of the field, running 15:33 at Mines Falls.  Last year’s runner up and third placer will be back in InterLake’s Cam Daly as well as Hopkinton’s Dom Repucci.  However, Patrick O’Brien has had a sensational season and looks to be in the mix.  Timberlane’s Liam Kimball has been coming on of late with the win last Saturday and the day’s top time.  After the front four look for the duo of Nick Sevilla and Noah Davis from Pinkerton to be in there.

Other names running in the top twenty could include Cam Dickson of Londonderry, Justin Carbone of Exeter, Alexander Saveliev of Concord, Kendall Westhoff of Alvirne, Nolan Cooney of Central, Jeff Reddy and Tom Hanlon of Pinkerton, Avery Traffie and Jake Movsessian of Mascenic, Jackson Brannen of Goffstown, Nick Brown of Kennett, Hunter Miller of Kingswood and Neville Caufield of Oyster River. Race Videos, interviews and pics (soon) on the MOC Meet Hub! Results Courtesy of LancerTiming After a biblical week of rain, the 2018 […]