Photos Courtesy of Julie O’Brien – Thanks!!!

Vermont’s prestigious 26th Annual Thetford Woods Trail Run was held at beautiful Thetford Academy.  Teams from all over New England competed on this challenging 5 kilometer course.  This race is all about volunteerism as it seems the whole community comes out in support to put on such a spectacular top notch event. 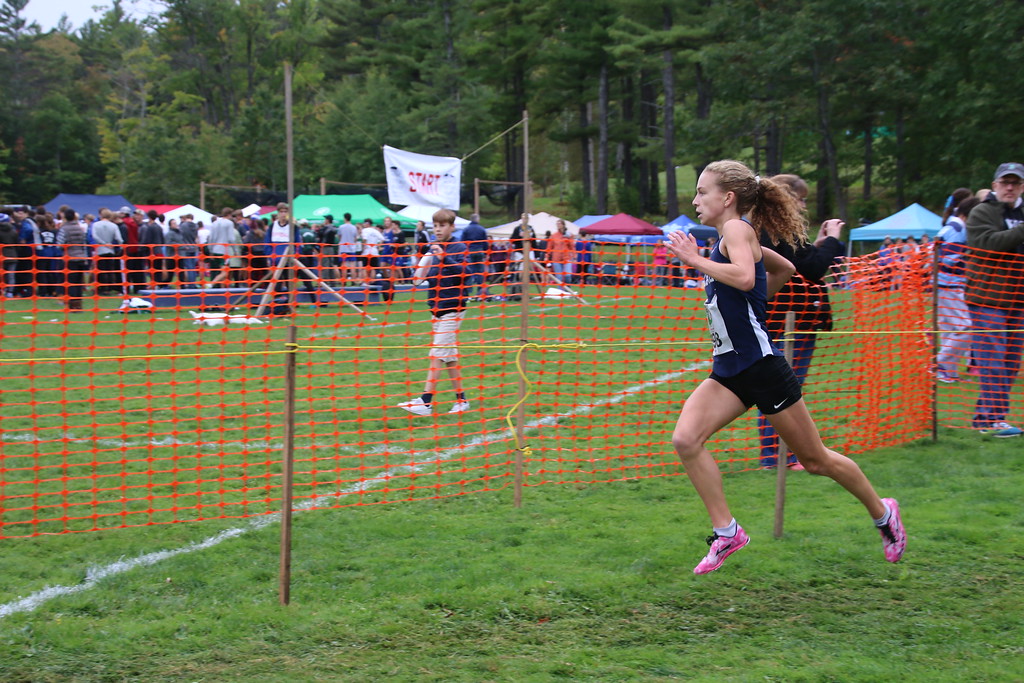 Individually, New Hampshire High school girls were well represented in the top fifteen.  Defending Champion and last week’s Manchester Invitational champion , Jackie Gaughan of Exeter, simply went out and destroyed the competition.  Winning the race in an impressive time of 18:29, outdistancing second place finisher Sophia Jacobs-Townsley of Amherst-Pelham, Massachusetts (2nd 19:04) by 35 seconds.  Gaughan’s time would have placed her second in last year’s New England Championship that was held on this very course.

Madeline Hunt of Souhegan led the way for the rest of New Hampshire which captured the next six out of seven places. Hunt placed 6th in 19:43.  Exeter’s Violet Sullivan was nearby in 7th at 19:51, Merrimack Valley’s Kristie Schoffield was 8th in 19:54, followed by a pair of Souhegan teammates Ariel Zlotnick (9th 20:04) and Jane Leighton (10th, 20:08).  Lauren Robinson of Nashua South (12th 20:18 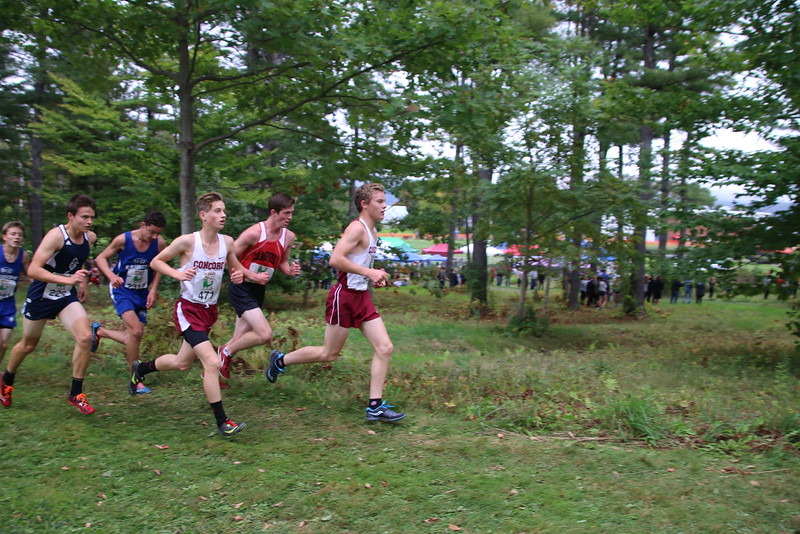 ) was the last of NH’s ribbon finishers.

2016 Manchester Invitational Team Champions Champlain Valley of Vermont continued their winning ways by placing all five of their scorers in the top 22 positions to score 74 points.  Led by three of their top ten finishers, Souhegan (NH-5) ran a very strong 2nd  with 163 points.  Merrimack (NH-9) placed 6th with 273 points, Exeter was 7th with 281 points and Nashua South was 10th with 394 points.

The boy’s race was settled by the thinnest of margins.  New chip timing had Drew Thompson of Fairfield Prep, Connecticut winning by.006, yes that’s 6 thousandths of a second! Thompson’s time of 16:09.03 was shared identically with Tyler Marshall of Champlain Valley Vermont in the results, but modern timing made the determination. Something the naked eye could not.

Individually, New Hampshire boys did not fare so well. Only three from the Granite State received awards for placing in the top 15.  They were Oliver Spencer of Concord placing 12th in 17:13, and a pair of sophomores, Campbell’s Jeffrey Allen (17:16) and Concord’s Forest MacKenzie (17:19).

Champlain Valley got their revenge winning the team competition with 66 points, turning the tables on 2016 Manchester Invitational Champions Concord (NH-1) 2nd with 143 points.  This was Concord’s first defeat of the season.

Trail Run.  It was held at beautiful Thetford Academy on top of Thetford Hill under near perfect running conditions.  Teams from all over New England competed on this challenging 2.7 kilometer single loop course which preceded the featured high school races.

The Deerfield girls’ team was the lone New Hampshire team winner on the day.  The girls put all 5 scorers in the top 35 positions to win their first title at Thetford after coming up short for several years.  Deerfield’s winning score was 71 points, just five points better than host Thetford Academy (2nd 76 points).  Hanover placed 7th with 194 points and Hampton Academy was 9th with 203 points.

Woodstock Vermont native Riley Shepard turned in the second fastest time ever to win the boys Junior High race in 9:11.  Brayden Kearns tried to make it three years in a row for Individual Deerfield victors, but came up short by placing second in 9:16.  Kearn’s race was somewhat satisfying as he finished ahead of 2016 Ocean State Invitational Champion Alex Maxwell 3rd 9:21.  Kearns finished second to Maxwell in Rhode Island two weeks ago.