The 43rd New Hampshire Middle School State Cross Country Championships will be held this year on Saturday, October 22, 2016. Because of the sheer numbers the popularity of the sport at this age level has generated, the meet is now taking place at 2 separate sites.  Londonderry High School will be hosting the Division I and II races and Division III will be held at Coe-Brown Northwood Academy (course map).  As always the professionals of LancerTiming will be timing both events.  NHCC will also be covering both events so expect photos, videos, and interviews!

The top returning team is 2016 Tri-County Division 2 Champions McLaughlin, who return their top-5 intact from their 2015 runner-up team. Hillside and Rundlett will race for second, while Ross A. Lurgio, Keene and Cooperative Middle School will clash for the next three places.

Individually, Lurgio’s Carly Rinko is the Division’s top runner after running the fastest time of the day at Tri-County.  Tri-County Division 2 Champion Cali Coffin of Fairgrounds will be her top challenger along with perennial favorite Morgan Nault of McLaughlin.  Hillside’s Fiona Doherty and Morgane Orcutt of Rundlett and Seacoast Championships runner-up Cooperative’s Grace Mercier should also challenge for the individual title.

2016 Tri-County Division 1 Champion Amherst Middle School is the favorite.  Led by Masho Primmer and Chloe Trudel, Amherst had four very strong runners that placed in the top thirteen at Tri-County.  Seacoast runner-up Portsmouth will be the top challenger.   A distant third place will be decided by Oyster River, Litchfield, Bow, Hampton Academy, Monadnock and Hollis-Brookline.

Individually, top honors should go to Portsmouth’s Angela Hagstrom.    A mêlée of the top Amherst girls including Sophia Lunati and Annie Bermingham and Oyster River’s Sophie Sullivan should decide the next few places. 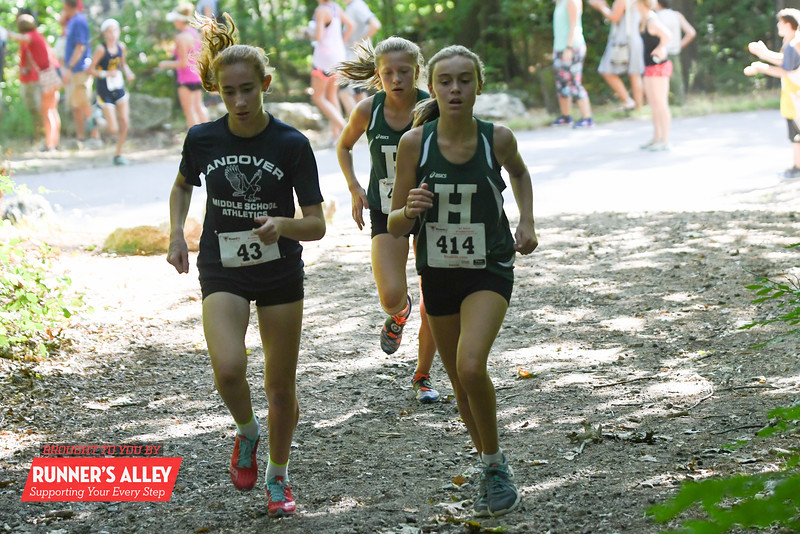 After sweeping the top 4 places at Tri- County, the Defending NH State Champion Hopkinton Middle School is the favorite over six-peat Southeast League Champion Deerfield.  Northwood, Chester Academy, Shaker Road and Hampstead should battle it out for third.

Individually, two-time NH State Champion Addison Cox of Northwood is the overwhelming favorite and should become the first three time winner in the Championship’s History.  Sophie Reynolds of Andover, Sophie Hopkins of Deerfield, Tessa Griffith of Shaker Road and Hopkinton’s Big 4 led by Cailey Stockwell, Anna O’Reilly, Lilia Klinger and Addison Locke will all be vying for a top 5 finish.

Londonderry should three-peat in a landslide!  With the top three finishers in the 2016 Tri-County Division 1 Championship, individual champion Will Heenan along with teammates Ryan Young and Matt Griffin, placing all five scorers in the top nine places, they are the heavy favorite to repeat as State Champions. Rundlett, Keene, McLaughlin, Woodbury and Cooperative Middle School will compete for the runner-up position.

Oyster River’s overall team depth makes them the heavy favorite. Led by Owen Fleischer, Amani Harvey and Andy O’Brien, and a solid 4-7. They should run relatively unchallenged and win their first team title since 1996.  The race for second will come down to Bow, Sanborn, Portsmouth and Monadnock.

Individually this is the best race of the day.  Last week at the Seacoast Championships Fleischer, Harvey and O’Brien had to battle it out with Portsmouth 6th grader Avery Crowell and Sanborn’s Dylan Khalil for the individual title.  A mere seven seconds was the difference between all five, with Fleischer taking the win, only 5 seconds off of current NH high school majordomo Patrick O’Brien’s 2012 record.

Newly Crowned 2016 Southeast League Champion Northwood School is clearly the favorite to win their first NH State Title.  Aidan Cox, Porter Heigis, and Luke Tkaczyk have led their team to an undefeated season.  4-Time defending NH State Champion Deerfield will step aside for this year and battle a tough 2016 Division 4 Tri-County Champion Boynton team for the silver.  Challenging for a top five performance will be Nashua Catholic, Winnisquam and Academy for Science.

Division III is perhaps the deepest overall with individual talent. Northwood’s Southeast League Champion Cox is the clear-cut favorite to win the first ever D III State title.  Southeast runner-up Brayden Kearns of Deerfield should wage war again with Northwood’s Tkaczyk and Heigis.  This battle will be fought out on all fronts including the duo of 2016 Tri-County Division 4 Champion Josh Movssessian and Landen Vaillancourt of Boynton, Ryan Fischer of ASD and Torin Kindopp of Chesterfield. Click on any picture below to link to Dave Scannell’s 800+ photos (free, downloadable)!!! Race Videos Courtesy of Greg Hall and Peter […]