On Saturday, for the 40th occasion, New Hampshire Cross Country will gather and compete to determine who is the best of the best for 2016.  Whether teams and individuals use this as an opportunity to simply qualify for New Englands (top 6 teams/top 25 individuals) or as their final competition of the season, it is the one time when the best teams across all divisions toe the line, head to head in one race.  The individual NH State Champion is crowned, and although no team championship plaques are awarded, bragging rights for the Granite State’s top team are earned.  Good luck to everyone!

LIVESTREAM WITH COMMENTATING (we have worked the bugs out!!)

Last year’s race videos are below the articles

Last year, as fans we were treated to a phenomenal team cross country championship between 2 of the better teams in the whole Northeast, Pinkerton and Coe-Brown.  Both teams had all of their top 5 under the 19:00 barrier.  Both teams ran with strong packs.  Both teams punched and counter-punched.  CBNA placed 3 ahead of Pinkerton’s 1st runner.  Then Pinkerton placed their entire top 5 ahead of Coe-Brown’s 4 and 5. In the end, CBNA barely won their 5th consecutive MOC title by 7 points. 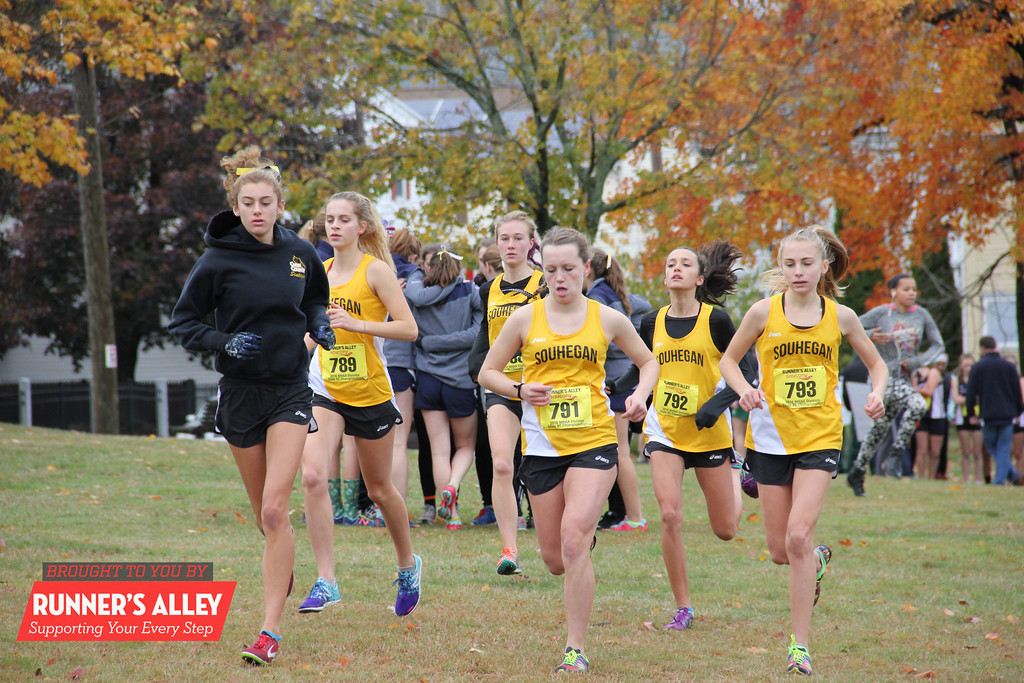 This year, both teams will factor in, but boy do they have company!  Souhegan (NH#1) seems to have the most complete team and is the favorite to emerge as NH’s top team.  With Madeleine Hunt leading the way last weekend, the Lady Sabers wrested the D-2 title away from Coe-Brown.  But Souhegan is not just Madeleine Hunt.  With the emergence of a healthy freshman in Marissa Romano as their number 4, the Sabers have the bridge connecting their 5th runner, veteran senior Shannon Earley, to sophomore Arielle Zlotnick and junior Jane Leighton, who both placed in the top 10 last weekend.  They run a similar race on the flat course that is Mines Falls, and Souhegan could reign supreme.

Last weekend, Pinkerton (NH#2) was the surprise winner of the Division 1 title.   Their top four dominated the top 10 and that was enough. However, according to the merge of divisional meets, Pinkerton was the second best team last weekend even with placing their top 4 in the top 20.  In freshman Meghan Cross, sophomore Ciara April, junior Maison D’Amelio, and sophomore Jordan Vaillancourt, they simply have the best top 4 in the state, by far.  But they do have a gap until their number 5.  If they can close that gap, they will win.

Finishing next on the merge is 2016 Division 2 Runner-Up Coe-Brown (NH#3).  Surprisingly, the school

which is the 5-time defending champ of this meet, may be one of the more inexperienced.  Yes, they have Alli Pratt and Sarah Dupuis, but the next 5 will all be competing in their first ever MOC. While Elly McDonough, Hannah Daly, and Abigail O’Connor rely on each other as a pack to succeed, if they can just improve their pack placement by 10-15 seconds, they could pull this one off.

The Division 1 Runner-Up Bishop Guertin (NH#4) may have the most course knowledge of any top team and with their fabulous freshmen trio of Caroline Fischer, Haley Schmitt, and Caroline Towle, they are going to be contending for at least the next 4 years. With those three, they seem to mirror Souhegan in that their success mildly depends upon how close their fourth and fifth runners can finish to their #3.  Keep in mind this week’s course is flat, and BG ran very well and very fast down at Brown just a few weeks ago.  This is essentially their home course and maybe their kind of course to pull off the major upset.

Competing for the final qualifying slots for New England will be Alvirne (NH#5), Merrimack (NH#6), Bedford (NH#7) and Hanover (NH#8). In Alvirne and Merrimack, we once again have two similar teams in that they rely on having strong packs.  Their fate simply depends upon how far up the field each one finishes.  Last week Alvirne placed 3rd because they had a strong pack of 5 while Merrimack and a formidable 4-pack.  If Merrimack’s 5th can join the others, they may be able to overtake the Broncos. Do not overlook Bedford.  With the benefit of having that one low number in Salis, the Bulldogs, may be able to book a trip to Ponaganset.  The sleeper however is Hanover.  Having to sit their #3 (Elsa Nordstrom) last week as she recovered from a sprained ankle obviously hurt their chances, but assuming she will return gives them a great shot at qualifying as well.

Individually, by virtue of her smashing of the Derryfield Division 1 record, Exeter’s Jackie Gaughan is the favorite to win her first MOC title. Let’s put this in perspective.  Danye

lle Woods held the Division 1 record since 1992. For close to 25 years it survived the Class L/Division 1 New Hampshire Cross Country world and Gaughan dispatched the record by 22 seconds! And she is only a junior! Based on her 16:53 on the track at Nationals last spring, we all knew she was going to be fast, but this fast?  What will she run Saturday?

It may depend upon Bishop Guertin’s Caroline Fischer, who (btw) came within a couple seconds of also breaking Woods’ record.  She is only a freshman, but has demonstrated a maturity in racing beyond her age in pushing Gaughan for the first half of their 2 races.  With MOCs being at Mines Falls, a venue she literally grew up on, expect Fischer to hang around longer on Saturday.

Bedford’s Leya Salis and Souhegan’s Madeleine Hunt, separated by only 5 seconds should battle it out for 3rd.  The always consistent, savvy veteran, Salis would seem to have the edge here; however, Hunt is absolutely breaking through to that next level, seemingly peaking at the righ 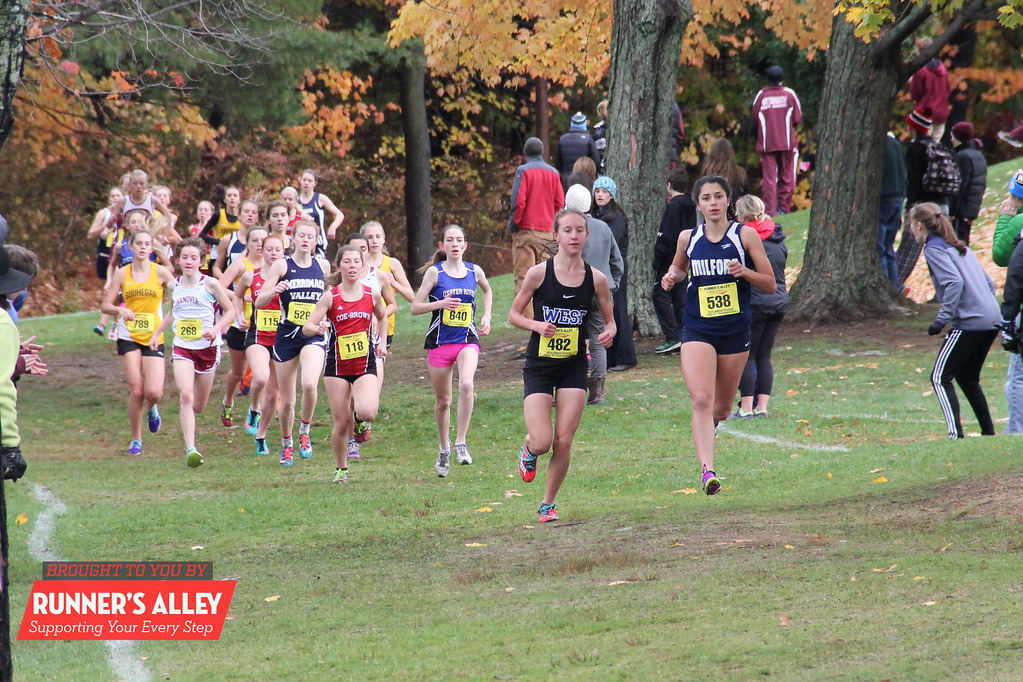 t time.  She looked quite comfortable over the entire course last week. Also having a breakthrough performance last weekend was Oyster River’s Danielle Slavin, who rolled to an 18:23!  Don’t be surprised to see her mixing it up with these two as well.

After these five, things will be up in the air a bit, depending upon several variables (hilly v. flat course, etc.), in the individual race as to who will place in the top 10. West’s Julia Robitaille, Windham’s Susie Poore, Merrimack Valley’s Kristie Schoffield,  Pinkerton’s Meghan Cross, and Milford’s Rebecca Durham could all find themselves in a substantial chase pack, vying for a top-10 finish. Don’t count out Pinkerton’s fab four (Maison D’Amelio, Ciara April, Jordan Vaillancourt), Souhegan’s Arielle Zlotnick, Coe-Brown’s Alli Pratt, Exeter’s Violet Sullivan or Souhegan’s Jane Leighton to challenge for All-State consideration either.

The boy’s team competition looks to be the most competitive in many years.  Most would agree that this year will be a battle of the top six teams, the same number that qualify for New Englands in Rhode Island next week.

With four returning seniors and fresh off winning their fourth straight Division 1 Championship, Pinkerton (NH#1) is led by Calvin Graves  and Jonathon L’Abbe, who placed 3rd and 4th respectively last weekend.  If Kyle Hajj 14th and Pat Bastek 17th remain steady and poised, Pinkerton looks to be the slight favorite for the MOC three-peat this week after beating Concord last week by four points. Pinkerton ran a tactically smart race at Derryfield, patiently coming from behind to upend the previously #1 Crimson Tide.  Because of sheer depth (Josh Noe 22nd, Joe Gagnon 23rd, Ethan Desmarais 28th),Pinkerton has some room for error in their championship quest.

Concord’s (NH#2) Forest MacKenzie (5th), Jamie Wilkes (7th), and Oliver Spencer (11th) are motivated by the sting of the recent defeat.  Concord should rise to the challenge on this course.  They need to race great in Nashua and by virtue of winning the North-South Invitational in a thriller earlier in the season, they are more than capable and should dig deep to get their mojo back.  Eli Boesch Dining (16th)and Freshman Ryan Devine (25th) and the rest of the Concord contingent need to have fire in their eyes if they want to turn the tables.

Zach Richards led three other teammates (River Groves 4th, Evan Tanguay 6th, Tanner Richards 7th) to top seven finishes polishing off another Division 2 Championship for the senior-laden Coe Brown team. The win was their third straight state title and they will be legitimate contenders to win their first ever Meet of Champions title.  If fifth man Davio Deluca (15th) has some MOC magic as he did in 2015, Coe Brown could win.

In the early stages of last week’s Division 1 Championship, Keene (NH#4) looked as if it was in the driver’s seat accelerating along in contention for the win.  Even though Division 1 race winner Jonathan Allard ran brilliantly, and teammates Andrew Derry 6th and freshman Jake Velasquez ran an outstanding 8th place finish,  heartbreak struck when third man Tim DeRaps dropped out of the race.   Keene finished a distant third, but considering the positive, has the most upside of any team if they can run to their full potential.

Nashua North (NH#5)served a similar fate as Keene.  David Vorbach dominated the early part of the Division 1 Championship, but failed to complete the race.  Nashua North finished a discouraging fourth, but was led by a solid 10th place finish turned in by senior Connor Muise. Max Ireland placed 12th and Sheamus Adams placed 15th doing their part.  A healthy Vorbach is the key to Nashua North, if they are going to pose a significant challenge for the win.   They have enough overall talent and their familiarity of the course is paramount.

Oyster River (NH#6) were the runner-ups once again in Division 2 and will most likely get the benefit of the low stick with race favorite and Division 2 Champion Patrick O’Brien.  Henry Keegan (8th) and Parker Spinney (10th) are solid, but 4-7 are going to need to run the very best races of the year to reasonably challenge for a top five finish.

The data comprised from the 2016 Divisional Merges denotes a significant 120 point difference from 6th place team to the 7th place team finisher.  As we have learned from history, there are so many variables; you still have to RACE the race, and the past is the past including last week.  Every race starts with your foot behind the starting line and the clock reads 00:00.  That being said, the best of the rest includes Division 3 Champions Monadnock, Alvirne and Pelham.  All have the potential to catch fire and surprise the teams that aren’t a full seven. You know who you are.  The next tier fighting for the top ten finish will be Nashua South, Kearsarge, Londonderry, Bishop Guertin and Hollis/Brookline.

Individually, Oyster River’s Patrick O’Brien is head and shoulders above the rest.  His time of 15:24

last week was 49 seconds faster than his next competitor.  He should be able to distance himself from the pack and run comfortably hard to the finish.  The 2010 course record of 15:07 held by Bishop Guertin’s Jeff LaCoste should be in O’Brien’s crosshairs.  When LaCoste set the record he was also the heavy favorite.  LaCoste won the Division 1 title that same year in 15:31.

In the words of Lloyd Christmas, “You’re telling me there’s still a chance.”  IF O’Brien doesn’t break away from the pack, Keene’s Jonathon Allard and Alvirne’s Noah Bellomo have superior closing speed that even O’Brien doesn’t want to test.  Most likely they will be in the battle and the favorites for second.

Pelham’s Cameron Starr, Nashua North’s David Vorbach and Coe-Brown’s Zach Richards should all force the pace of the chase pack to keep it honest.  Another late charge from Pinkerton will be led by Calvin Graves and Jonathon L’Abbe. This will be countered by Concord’s trio of Forest MacKenzie, James Wilkes and Oliver Spencer. Keene’s Andrew Derry and Jake Velazquez will do their part as well. This post is for all of those statisticians out there!!!  Fresh off last night’s Rankings Reveal, here is our annual Manchester Merges […]