It only seems fitting that the day after the first day of autumn, the temperature skyrockets into the 80s. Facing a week of absolutely 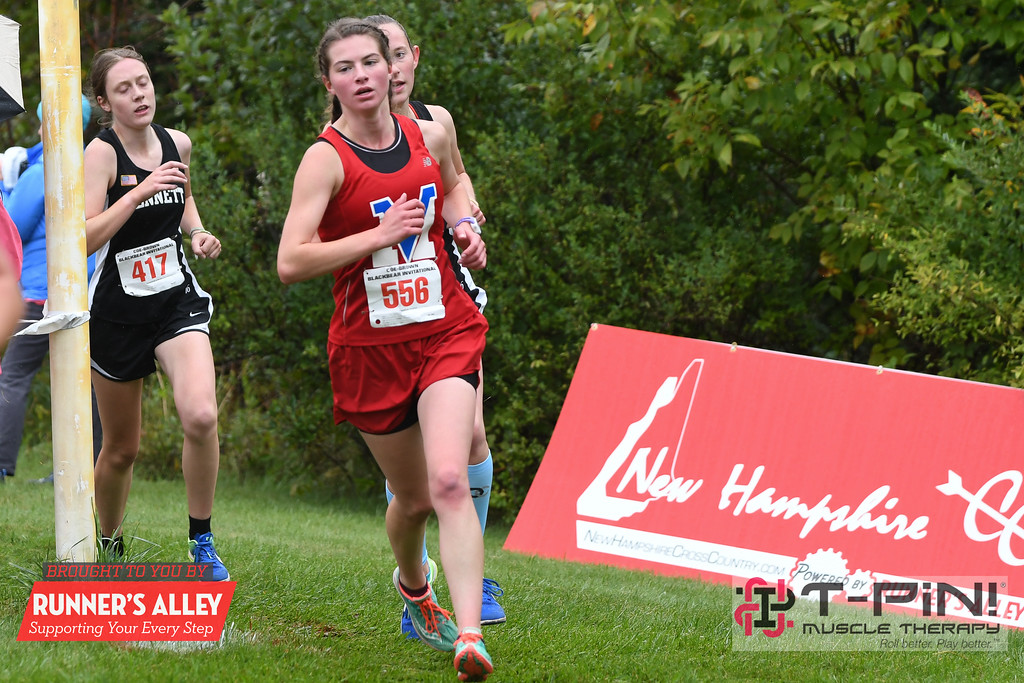 treacherous heat, the schedule had to be shuffled around a bit so that nobody would suffer from heat stroke one month before the state championships. We settled for an extremely short practice on Monday, and all mutually agreed to meet up at the Greenville Rail Trail, a flat – and more importantly, shady – trail stretching through Greenville and slightly into Mason. We headed out to attempt a negative-split run (one of my personal favorite tempo workouts). Places such as rail trails are an ideal place to run negative splits, since it makes it much easier to run out for however long you need to, turn around, and run back faster.

Tuesday was meant to be a low-maintenance easy run, but due to temptation from the clear waters in the Spring (as well as the not-so-clear waters in Bankee), we pretty much swam more than we actually ran. Out of all of the sweltering days of the week, Wednesday was the one we dreaded most. Hot or not, we were going to be up on the shade-less track for 300 meter repeats with a 200 meter recovery. Luckily, we were pleasantly surprised – with a slight breeze present and a lack of suffocating humidity, the workout actually wasn’t too bad. Many of the pace groups looked smooth and felt good completing the repeats. 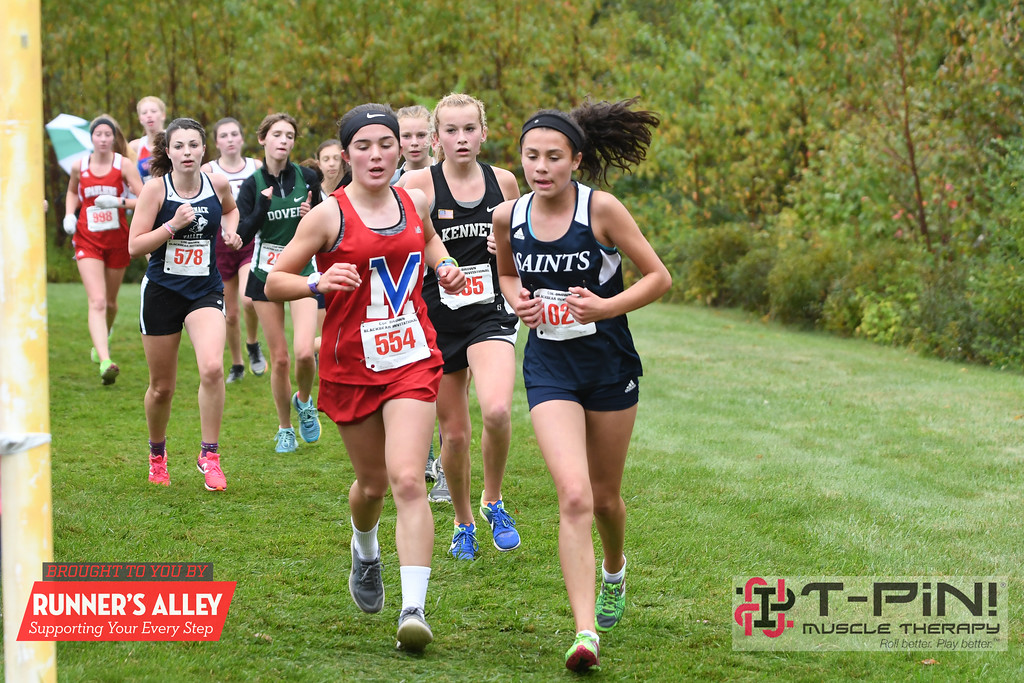 Thursday’s run was anything but good, though. With an easy long run on the schedule, quite a few of us decided to revisit some secret trails out in the back of the Nussdorfer. All was fine and dandy until we came across the dreaded Pig Poop, which is the nickname for a ‘trail’ which the Mascenic distance program somehow found that runs through a farm’s disposal grounds for pig manure. Since it wasn’t too hot or muggy, we decided continue our run through it, assuming the stench wouldn’t be overwhelming – but boy, were we wrong. However, in an effort to accommodate any easily-sickened readers, I’m going to leave out all details of our close encounters of the turd kind (yes, pun intended).

Friday we took it easy once again, in preparation for the Black Bear Invitational on Saturday hosted by Coe-Brown. The Mascenic High School and Boynton Middle School teams had the misfortune of arriving right when it was raining the most. Although the rain improved as the day went on, the temperature did not – I don’t know about anyone else, but my fingers and toes are still thawing out a bit. Despite the cold, the meet went exceptionally well! Quite a few kids on our team set new personal records, and those who didn’t still had impressive races! We don’t want to forget about the middle schoolers either, who also ran fantastically! Congrats to everyone, and a big thanks to the Coe-Brown crew for putting on an awesome meet!

I’m sure Logan Thibault would agree that Monday’s practice got off to a great start, since he was finally rewarded the shirt he’s been 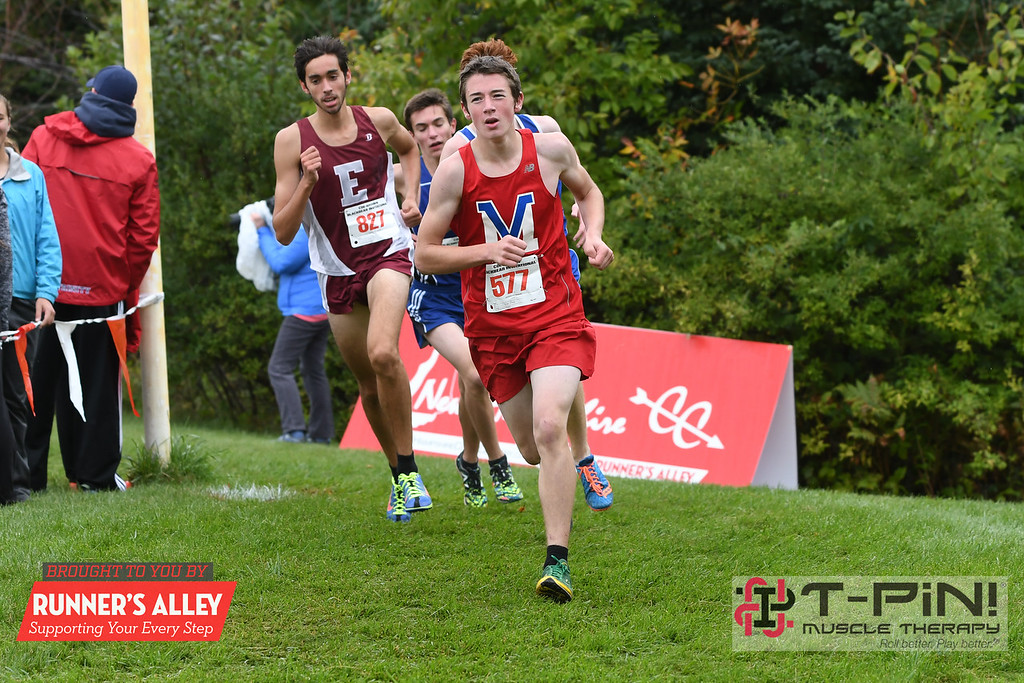 trying to earn for the past three years. For pretty much every meet, Smith chooses a couple of runners who display impressive performances to earn an optic yellow Mascenic cross country t-shirt. On Saturday, Logan had gotten spiked in the ankle barely a minute into the start of the Black Bear Invite (and would end up needing stitches afterwards), but he pushed through it and completed the run – he even achieved a PR! Due to this awesome race, Smith chose Logan as one of the runners who deserved a shirt. Afterwards, the team headed out for a low maintenance long run.

On Tuesday, we revisited The Grinder, in the hopes to improve on our times from earlier in the season. To our delight, almost everyone conquered The Grinder faster than when we ran it a few weeks ago! When we’re this close to States, signs of improvement are a great thing to see. A handful of the Mascenic runners took the liberty to show a few freshman “The Pipeline”, which is exactly what it sounds like: a pipeline! It’s about a half-mile long and runs through the woods, so one has to be careful to ignore the fall foliage and keep your eyes on where you’re stepping, or else you may just fall off! 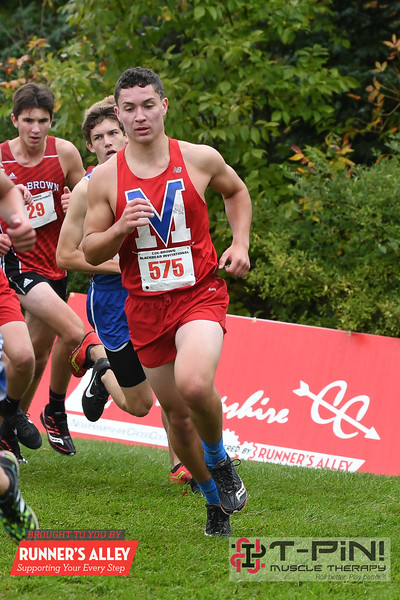 Since we ran a good amount of uphill the day before, Wednesday we ended up practicing how to run downhills. Smith took us on the back part of our course to run a few repeats on a sloping downhill before trekking up to the baseball field for a few practice starts. All in all, it was a day to focus on different racing skills.

Thursday was kept to an easy 40 minutes in order to allow the team to rest up for the Jeri Blair Invitational on Friday at Belmont. Due to the condition of the track, (which is usually utilized during the race), the course had to be slightly altered. In an amusing turn of events, both the boys’ and the girls’ races somehow got mixed up with when to turn where: the girls’ race took a narrow shortcut in the finishing stretch, while the boys’ race took a wrong turn in the very beginning to lengthen the course. Despite these surprise changes, the Mascenic crew ran well! Our girls’ placed 6th overall (and 4th out of the Division III teams) and our boys’ team took 1st place! The boys’ team actually put 3 of our guys in the top ten, and our scoring 5 all in the top 20 – so I would say we’re feeling good going into the long weekend!