The 44th New Hampshire Middle School State Cross Country Championships will be held this year on Saturday, October 21, 2017. Just like last year, because of the sheer numbers that the popularity of the sport at this age level has generated, the meet is again taking place at 2 separate sites.  Londonderry High School will be hosting the Division I and II races while Division III will be held at Coe-Brown Northwood Academy (course map).  As always the professionals of LancerTiming will be timing both events.  NHCC will also be covering both events so expect photos, videos, and interviews! 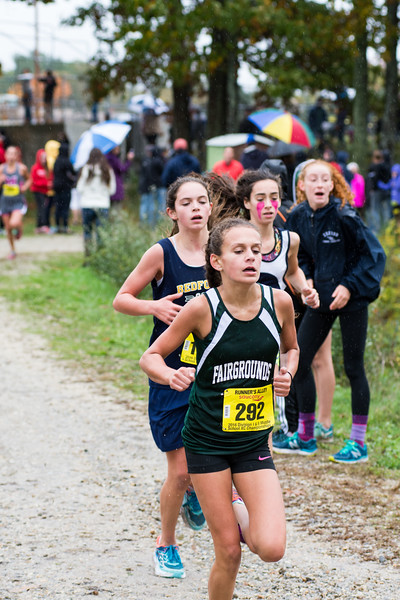 Defending two-time State Champion Hillside of Manchester is going to have to run their best race of the season if they want to make it a three-peat.  They have done it before under pressure and they can do it again.  After crushing the competition at the Tri-County Division I Championships, Woodbury looks to be the solid favorite this year led by Tri-County Individual Champion Bethany Graham.  Londonderry will have their fingers in the pie this year also after a one point, 2nd place finish over Hillside last week. Look for Rundlett, McLaughlin, and Seacoast Middle School Champion CMS to battle it out for a top 5 finish.

Woodbury’s Graham looks to be the overwhelming favorite this year after crushing the competition last week. Her teammates Natalie Coryea and Lily Thomas should get some low numbers for the championship effort. Hillside’s Fiona Doherty, Seacoast Champion Ali McFarland and Lindsay Machado of CMS will challenge.  Londonderry’s Katie Kraft, Caroline Leone, and Grace McDonough will contribute significantly to the Lancer’s quest to be the best. Dominique Secovich of Elm St. will be in the fight also.

2016 State Champion Amherst is a very deep team that should have no problem winning another title.  After easily dismantling the competition in the Division II Tri-County Championships they should be very confident in themselves returning to the podium. Bow will be looking to slide into the number 2 spot this year after an impressive win in the Division III Tri-County Championship. After finishing second and third at the Seacoast Championships, Oyster River and Portsmouth will be looking for a top-5 finish this year.  Milford will be in the hunt along with Hampton Academy, and Pelham.

Tri-County Division II Champion Amy Pattelena of Hollis-Brookline edged out runner-up Chloe Trudel of Amherst by one second last week and will look to make it two in a row, this time it’s for a State Championship. Milford’s Abbey Halloran should be able to challenge for top three along with Amherst’s Stephanie Svendsen and Ashereka Primmer. Bow’s Maya Brochu and Hampton’s Kate Burrus will vie for a top five spot. 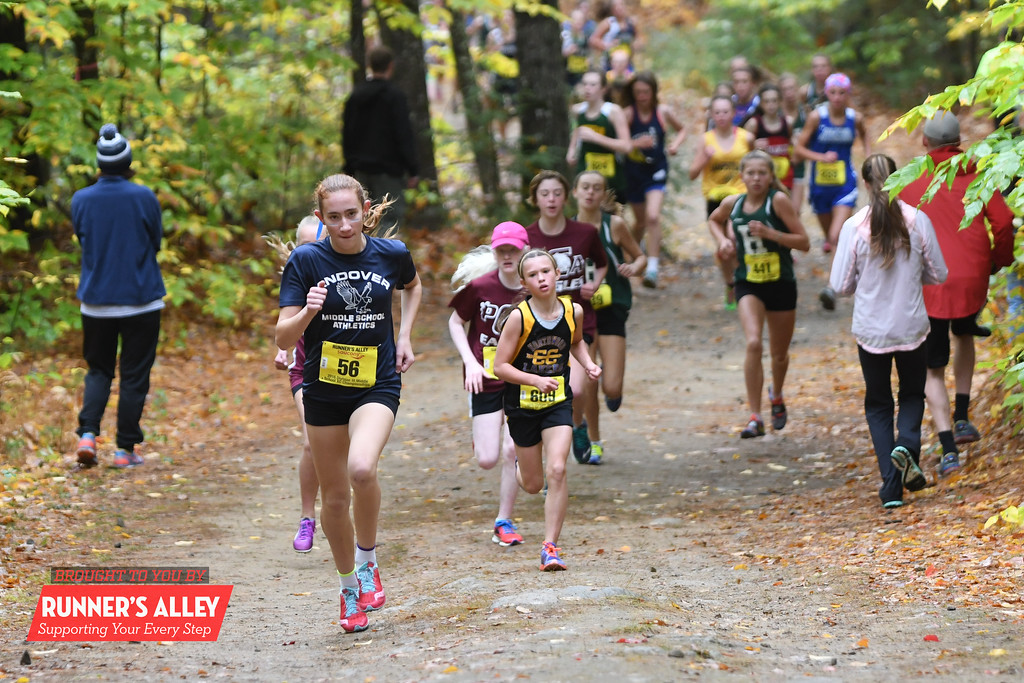 2017 Division IV Tri-County Champion Hopkinton has won the last two state championships in Small School and Division III.  Deerfield just won its 7th Southeast League Title in a row, and owns a solid victory over Hopkinton at the 2017 Manchester Invitational.  Hopkinton should have three studs in the chase pack pursuing race favorite Sophie Reynolds of Andover. Deerfield has been ten deep all season beating all three 2016 Division Champions this year.  Southeast runner-up Barrington and Tri-County Divison III runner-up Hampstead should battle it out for third place.  Strafford, Northwood, Newmarket, PMA, Auburn, Litchfield and Boynton are all very close and could finish anywhere in the top ten. 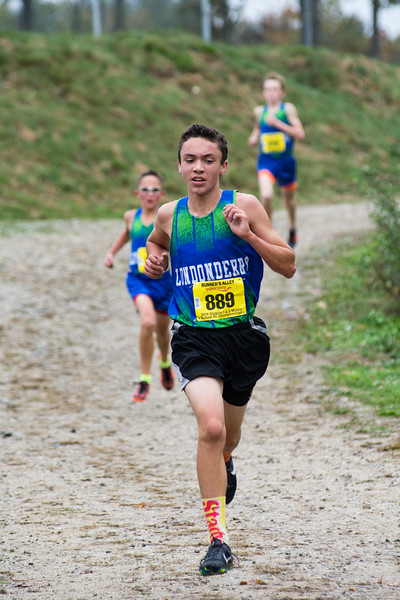 In 2016, all three divisions had three clear cut “Super Teams” that included Northwood, Londonderry and Oyster River. This year there are some really good teams but none that measure up to the overall talent that was produced last year.  This year’s Londonderry squad is deep and has the built in advantage of running in its own backyard.  Last week at the Tri-County Championships, Woodbury’s top four were better man for man against Londonderry but as you know it takes five to seal the deal. That being said Londonderry got the job done in winning another Tri-County Division I Cross Country Title.  Milford Invitational Champion Keene is the only team this year to deliver the sting of defeat to the three time defending State Champions. Rundlett, Elm St., Ross Lurgio and Hillside will fight it out for a top five finish.

Top returner from last year’s State Championship Woodbury’s Bradley St. Laurent made a statement race by winning the Division I Tri-County Championship over the always tough Tyler Kraft of Londonderry. Fellow teammates of the two front runners will be Evan Tremblay of Woodbury and Londonderry’s Jack Marshall, along with Hillside’s Gavin Lins and Londonderry’s William Plante will challenge in the chase pack.  Keene will counter punch with its “Big Three” in brother’s Tavi Maes, Luca Maes and Austin Morris in their quest to bring the title back west to the Elm City. 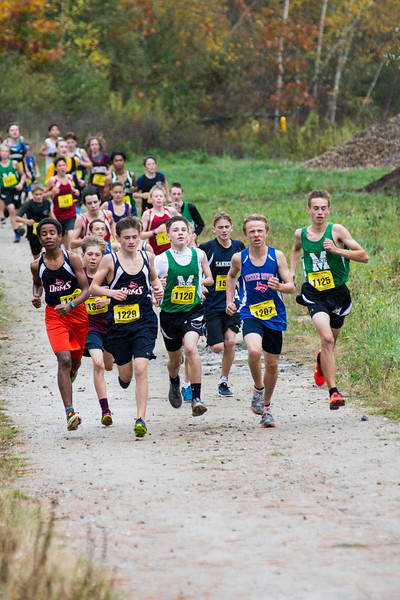 Oyster River should have no problem defending its 2016 NH State Championship.  They lost some key components from last year’s team, but like Londonderry their program is deep enough to reload with sufficient talent.  Sanborn will run tough and should be the favorite to claim second place. Amherst, Hollis-Brookline, and Kingswood should contest for third place.

Division II may just bolster the most overall talent on the boy’s side this year. This could also be the race of the day.  2017 Thetford Woods Champion Sam Murray of Hanover Parks & Rec just ran the 2nd fastest time ever on the hilly Vermont course and looks ready to challenge all comers for the DII title.  Among those challengers will be the top returnee and recently crowned Seacoast Champion Amani Harvey of Oyster River, Portsmouth’s Avery Crowell, Sanborn’s Jared Khalil, Tri County Champion West Running Brook’s Luke Brennan, and Hollis Brookline’s John Kotelly.

The best overall team from last year, Northwood will have its back to the wall and will be looking for some clutch running from their 3-7 runners if they are going to successfully defend their 2016 NH Championship Title.  2017 Southeast League Champion Deerfield looks hungry to get the title back.  Fresh off their impressive Division IV Tri-County Championship, the boys from Boynton gained some confidence this fall at the Black Back Invitational coming within a mere 7 points of Deerfield. Hampstead, Academy of Science and Auburn will compete for the fifth spot. Obviously we can’t do Larry justice, but channel your recollection of his unique speech delivering style and accent as you read each […]