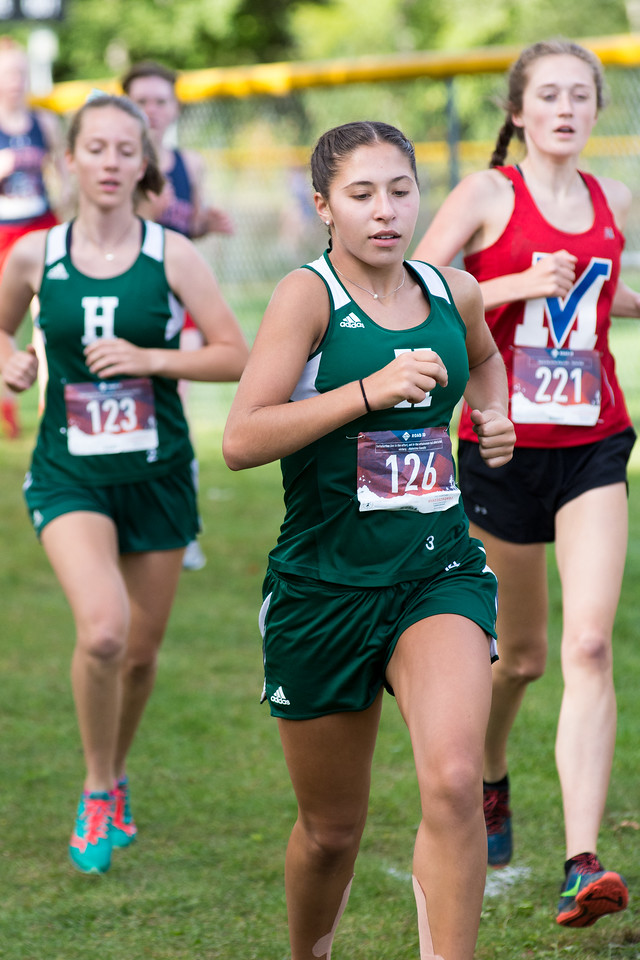 Friday afternoon in Belmont left no question that the fall cross country racing season was upon us.  With the quick changing, teeth chattering cold and wind blowing through the region coupled with the smouldering spark of competition making up the 38th running of the Jeri Blair Belmont Invitational, events of the day left everyone wishing for a cup of hot mulled cider.

With Jeri in attendance, the competitors were ready to put their mark on this year’s race on the notoriously difficult and long (5142 meter) course that starts and finishes with about 300 meters of the Belmont track.  A double loop course with a 450 meter long climb towards the end of each lap on some pretty gnarly single track, the course challenges the mind almost as much as the body. Get out too hard amped up by the competition and bury yourself in oxygen debt or go out to conservative and bury yourself in the field. The course challenges the racers to make good decisions in order to set themselves up with good races.

The girls race went off at 4pm with all eyes from both the racers along with the competitors on Kearsarge’s Mya Dube.  As the top returner and NH ace, Dube left nothing to question as she went right to the front, followed by teammate Lili Baers, Prospect Mountain’s Veronica Dowd, Winnisquam’s Faith Gosselin, Mascenic’s Quinn Aldrich and Hollis Brookline’s Amy Pattelina,and the entire top seven of Hopkinton, building a 5 meter lead before leaving the track.  That lead would only grow over the entire race, gapping the field 800 meters in by 40 meters.

By the end of the first lap, with Dube way out in front, Baers had opened up a gap on the chase pack made up of Hopkinton girls along with Dowd, Gosselin, Aldrich and Pattelina, and was joined by Kearsarge’s Jenna Bears.  But from here on out the Hawks would dig in, running as a pack, looking to exert dominance as the top team in the race and the de facto #1 team in Division 3. The race would string out from this point,

but the results would stay the same with Dube and Baers going 1-2, with Baers finishing 4th, usually a winning combination.  However Hopkinton would counter with Emma Rothe (3rd), Cailey Stockwell (6th), Hannah Bennett (7th), Anna O’Reilly (8th) and Lily Sabol (11th.) Dowd would finish fifth, Gosselin sixth and John Stark’s Brianna Langdon would finish tenth to round out the top ten.

Dube’s winning race time, 19:49 just missed making it onto the top ten list by a second.

Hopkinton’s top seven would all finish in the top fifteen, winning this one handily over Kearsarge, 30 points to 53 points.  Hanover would finish in third with 90 points, John Stark in fourth with 117 points, and Mascenic would edge out Gilford by three with 171 points for fifth.

With two of the top six individuals from the Black Bear Invite, the fans were sure to see some sparks fly at this year’s race in Belmont.  Mascenic’s Landen Vaillancourt and Jared Khalil of Sanborn have been burning it up all season long and with the potential return of Khalil’s brother Dylan, and Gilford freshman phenom Patrick Gandini, the makings of a great race were there.  Add in the Hanover boys (previously ranked in the top 10), who were unintentionally left out of the preview as they didn’t race at Belmont last year, and you knew this was going to be a good one. In the end Dylan Khalil didn’t return to action but the racing was hot regardless.

The race went out pretty hard from the gun, everyone jockeying for position before the first entrance and the ensuing bottleneck.  Once they came out of the first woods section, a good sized group rolled through the 800 with Vaillancourt, Khalil and Gandini at the fore, followed by a large group from Hanover, led by Trevor Siegel, Daniel Frost and Ian Nolon, Vaillancourt’s teammates Connor Traffie and Josh Movsessian, Winnisquam’s Riley Mann and Hopkinton’s Theodore Mollano and Shepyrd Murdough and InterLake’s Eben Misavage, showing the leaders had stepped off the gas a little now the race was under way.

As the front of the race crested the hill on the loop for the first time, it was obvious the contenders had started testing each other as Vaillancourt, Khalil and Gandini had a good size lead on the chase pack. Once on the tarmac, Vaillancourt launched into what could be called a suicide pace, begging the other two to come along while breaking open the field.  Siegel, Frost and Nolon led Traffie and the rest of the chase pack into loop 2.

In what looked to be a winning move, Vaillancourt led the racers back out into the wooded downhill section however Khalil was right in his back pocket, something you could only imagine Vaillancourt was not expecting.  Would Khalil get the upper hand on Vaillancourt? As the two returned over the second loop and the top of the second hill, Vaillancourt held a 10 meter lead and would remain in control through the finish. His time of 16:41 would put him #7 on the all time list at Belmont with Khalil’s 16:49 putting as the #10 time.  Gandini would best the rest of the field, hanging tough and finishing under the 17 minute mark in 16:58. Traffie would be the next in, racing the Hanover trio of Siegel, Frost and Nolon all the way in. Riley Mann would hold off a hard charging Gavin Garzia of Kearsarge for 8th and Mollano would hold on to the tenth spot.

While Mascenic would put two finishers in before Hanover would get one; however, the Marauders would go 5-6-7-14-16 to score 48 points to beat Mascenic’s 86 points. Sanborn would best Hopkinton 97 to 97 on the sixth man tie breaker while Hollis-Brookline would finish in the fifth spot with 142 points. Yep, pretty tough to drop to the 1600 after a cross country season, but that is exactly what Speed Sport Timing offered […]