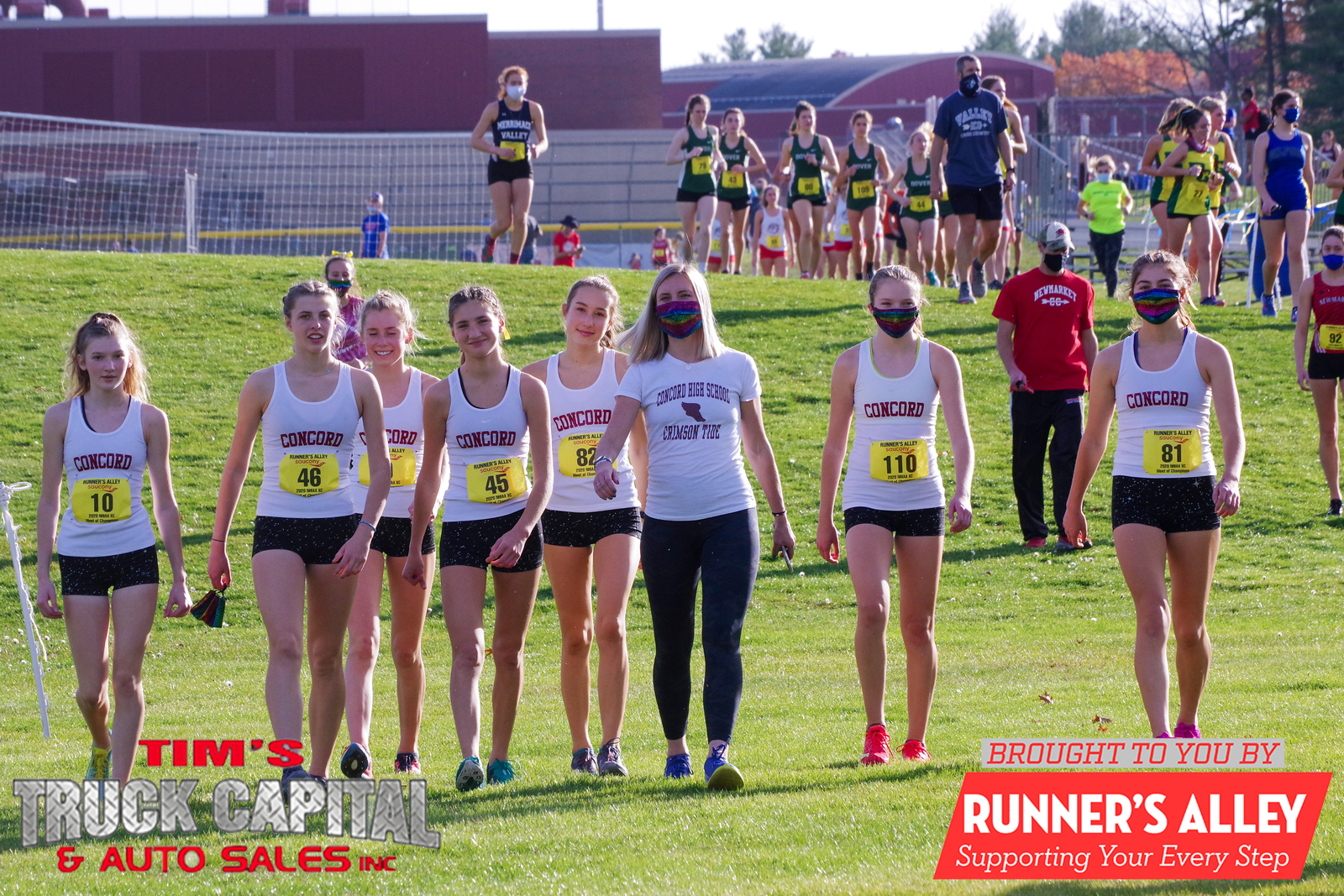 Here at the start of the 2021 season, and after all the unknowns that last year brought us (staggered starts, no Invites, regional schedules, and of course the masks), I’d like to mention some of the things that have me thinking this preseason.

First of all, I’d like to remember what a “normal” season feels like.  Last year we had a late start, two weeks late, which I feel was recognizable within the results at Divisionals and Meet of Champions.  For some schools, things were pretty much business as usual, while others had more restrictive, meaning less weeks of training in, making it difficult to be fully prepared come championship time.  Toss in teams like Keene and Pinkerton, each would have factored into both the D1 scoring and likely Meet of Champions.  Last season’s results would have looked a little different.

Along those lines let’s look at the double winners, Concord and Coe-Brown.  Double winners meaning they won both the boys and girls divisional championships.  We’ve done that once at Mascenic, in 2006, and I can tell you,

Related but not the same, I’m looking to the impact that both the Keene and Pinkerton programs will have both throughout the season and into the championships

this year.  Both schools were last minute COVID scratches come end of the season, and most likely would have made some noise in both the D1 Championships and Meet of Champions.  I can only assume those returning runners will be looking to prove themselves among the division and beyond.

Remaining in D1, I’m really interested in the development  of BG runners Mary Kate Finn and Nate Fondakowski.  I will openly admit that I was likely the one mis-identifying Ms. Finn, calling her Fiona Doherty who I knew from the Granite State Flash.  With our limited closeup ability at the Divisional meets and operating in a regional format, I was not aware of Ms. Finn’s exploits on the season.  Once I was corrected, I was duly impressed with Ms. Finn’s poise, leading the race under less than ideal conditions.  Not usual for a rookie.

To then turn around in the boy’s race and see another BG runner I was unfamiliar with take it out from the gun! I was impressed in what I was seeing. Thankfully Jimmy MacK knew who Mr. Fondakowski was and we had him correctly identified.  Maybe my interest is simply because these two caught me off guard, but I’ll be scouring results and live streams to see how they perform.  I won’t be caught unawares again.

Turning towards D3, I’ll be looking towards PCA’s Brianna Malone, the returning champ,  Gilford’s Patrick Gandini, also the returning champ, and the Gilford Golden Eagles girls team.  Starting with the Gilford girls, finishing fourth and only losing two to graduation, there seems to be something building there in Gilford.  Behind the bold running of Cat Stow, and a young but now veteran squad (who beat out my Mascenic girls team for fourth place), I’ll be keeping an eagle eye out on the girls from Gilford.

And then there is the Great Gandini.  Never mind that that kid has a running pedigree (his mom won the individual title 5 times!), the kid is simply a gamer.  Not only did he take it to one of D3’s best ever, he also made a mockery this spring winning the 1600, 800 and 3200 on a D3 meet that was quickened due to a horrific thunderstorm that halted the field events.  Everyone not named Aidan Cox best beware.

Don’t forget Brianna Malone.  Seemingly more of a middle distance runner during the track season, Malone is simply lethal in cross country.  Starting from the second wave, she quickly worked her way through the first wave (we recognized this at the mile mark in the broadcast) and simply ran a brilliant race.  And even though she did not cross the line first, she would end up the fastest racer in D3 by virtue of the faster time starting in wave 2.  She finished that up with a 9th place finish at MOCs.  With five in front of her being seniors, this should be interesting.

Additionally on a personal level, I want to see what’s in store for the Windham boys.  Finishing behind the Coe-Brown boys at D2s, and then finished third at MOCs behind Coe-Brown and Concord.  Let’s be real, there are many years this Windham squad would have won this race, but not against THAT Coe-Brown team.  Again in the spring, they gave Coe-Brown a run for their money at the D2 track and field championships.  While they lose three, with Rohan Rai as their leader, I suspect the Windham Jaguars will be lurking in the shadows this fall.

And finally, it would be foolish to create a list of things I’m looking forward to this cross country season and not list Coe-Brown’s Aidan Cox.  Not only did he dismantle New Hampshire’s best over the cross country course (and that includes private

schools), he simply led the best team NH has ever seen (my opinion) to the top of NH cross country and, if it hadn’t been a pandemic year, I believe to the top performance ever by a Northeast team at Nike Nationals.  And while his team was phenomenal (taking five of the top fifteen places at MOCs), Cox’s individual performances were just damn fun to watch.  Rolling 15:15.4 at Derryfield Park to break the course record, dropping his teammate by 40 seconds over the hilly second mile, was absolutely jaw dropping.  We were stunned in the broadcast booth, figuring something terrible had happened to teammate Luke Tkaczyk, when in fact he just never slowed down in his fight against gravity.  Then to break 15 minutes at Mines Falls, again simply a pleasure to watch

And this doesn’t even begin to look at what he’s done since then.  Running a 14:40 time trial in November, winning the MOCs 3200 in 9:13.45 solo, then 9:00 in NJ at the East Coast Championships and then finishing third at Nationals in 14:38.75 at historic Hayward field, all simply icing on the cake.  That cake is making me hungry for what’s in store for the lad in 2021 this fall.

I’m sure other interesting storylines will pop up and are lurking in the tall weeds, but this is a short list of what I’m interested as the season is about to start up.

Good luck to all the teams and athletes as we get this 2021 season underway! As we enter our first season without the unique-to-New Hampshire-XC-Track-and-Field voice of Tom McGrath, a couple coaches, one who happened to have […]