The 40th iteration of the “Jeri Blair” Belmont Invitational took place under beautiful fall skies and crisp fall weather that’s the signature of cross country racing. Also, seemingly becoming my signature is weak memories as in the pre race conversations with Belmont historian and coach extraordinaire he informed me that Concord never ran at the Belmont Invite, only the Capitol Area meet, which we are not a part of.  I swear I remember Guor Majak coming off the brutally steep finishing climb of the single track uphill and turning the corner for the track with arms and legs pumping, but as John mentioned, it could be my memory blending events I’ve seen over my 20+ years coaching.  Also expelled from my weak memory banks is a name slip up, mixing up Monadnock’s Mitchell Hill with a student’s name I had in multiple classes, part of a long line of name slip ups with my friends from Monadnock. My apologies.  And finally in my trio of faux pas, leaving the Bow girls team and Bow boys team out of consideration for team performances on race day.  Now that I’ve gotten the long list of mistakes I made off my chest, on to the recap.

Per usual, the aforementioned Scott Clark/John Goegel production began with Swiss like clockwork and German precision with the racing starting promptly at 4pm with the girls race.  After the usual Clark introduction, the “animals of the endurance world” got off and racing with the go command; everyone angling for the hole shot to the cone by the 100 meter start line.  Not looking to screw up

any more names, the results show Olivia Blanchard of Bishop Brady out early and pushing the pace, however I’m going to gamble that there was a bib mix up and it was really Katie Palmateer at the front.  Strung out behind her coming off the track was Maya Brochu of Bow, Hannah Bennett of Hopkinton, Cat Stow of Gilford and Amy Pattelena of Hollis Brookline, then the rest of Hopkinton’s top four and the rest of the field.  By 800 meters in Palmateer and Brochu were shoulder to shoulder, with Bennett and Pattelena following and Stow trailing a bit back from them.  Headed out on the woods loop, with the ominous single track uphill to come, we’d see who was on the gas a bit too much and who was working with the course.

One loop in and coming off the the hill, Palmateer and Brochu were still side by side, with Bennett and Pattelena 30 meters adrift tracked by Stow.  The Hopkinton girls #2 to #4 were in a pack with Monadnock’s Alyssa Hall with some space back to Hopkinton’s #5 Clara Locke.  However 800 meters later with just over a mile to go, Palmateer had opened a bit of a gap back to Brochu, with everyone else battling the competition and the course from that point on.

In the end, Palmateer would put some distance on the entire field, stopping the clock at 20:02 on the 5145 meter “New Millennium” course.  Brochu would hold off a fast closing Pattelena and Bennett, followed in by Stow, then the official results show Hopkinton’s Anna O’Reilly, Shaylee Murdough, and Cailey Stockwell ahead of Trinity’s Olivia Scharr and their other teammate Clara Locke.  However my eye tells me Monadnock’s Hall was nestled in there somewhere around eighth.

In the team race, Hopkinton took this one handily, scoring a low 34 points.  Bow would easily distance themselves from the rest with help from Brochu’s low stick with 60 points.  Mascenic, on the backs of some strong pack running, would break up the flock, finishing third with 105 points.  Gilford (111) and Hollis/Brookline (143) rounded out the top five teams. 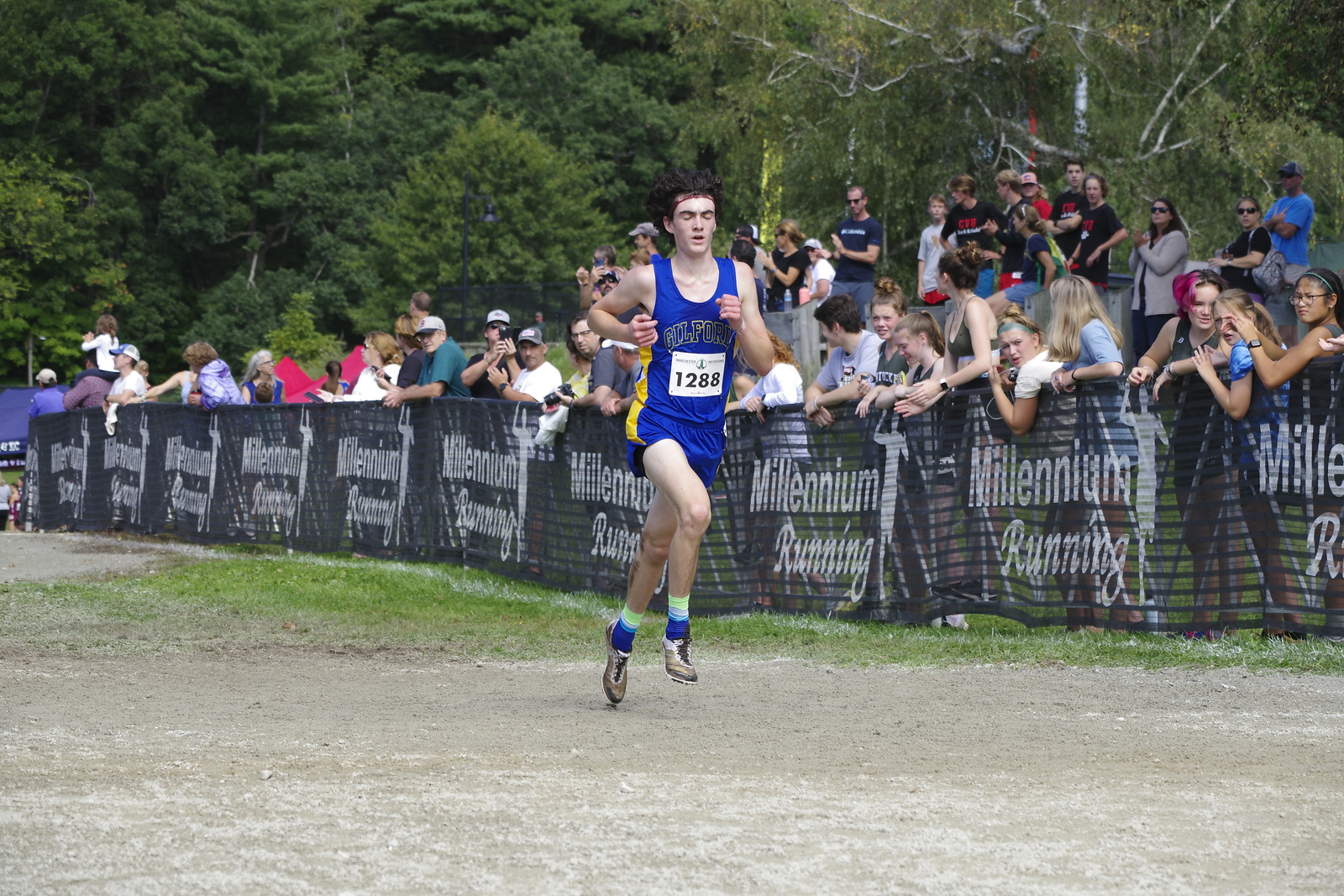 In the boy’s race, there was no mistaking who was in front of this one as Gilford’s Patrick Gandini got off the line like he was shot from a gun, intending to get himself on that Belmont all time top ten list.  With no help from the killer Khalils (derailed by not being able to secure a bus) the great Gandini had to do all the work upfront himself on this one.  Dragging out a contingent of runners from Bow, Hollis Brookline, Newfound, Gilford and Mascenic, the crowded track almost saw a NASCAR style pile up more accustomed to the venue eight miles away.  When things evened out, Gandini entered the woods loop with 30 meters on the field.

With the race out hot, there was bound to be some reshuffling out on the outer loop and at the halfway mark coming off the singletrack hill, Gandini was alone, out front by 30 seconds.  Emerging from the trail next was Mascenic’s Drew Traffie, Gandini’s pace setter for the early laps of last’s years D3 3200.  Traffie looked smooth and had a gap on Bow’s Adam Aricanli and Lincoln Routhier, Hollis Brookline’s Ryan Burgher, Newfound’s Connor Downs, Hopkinton’s Ben Daniels, and his own teammate and brother Connor Traffie.  The elder Traffie made a move to break open the chase pack and led going into the second outer loop.

When Gandini emerged off the singletrack uphill the second time he was well clear of the field, finishing in 16:39, more than a minute up on the field, running what is believed to be the fifth fastest time ever.  The younger Traffie would maintain his spot finishing second.  The duo of Aricanli and Routhier would take the

older Traffie right at the top of steep kick before the pavement, but Traffie would hang on, if only by a thread to nip both at the line in the best finish of the day.  HB’s Burgher, Daniels, Downs, Michael Pelletier of Bow and Jace Joslyn of Monadnock would round out the top ten.

Team wise, with three in the top ten, Bow would take this one by 13 over Mascenic.  Newfound would finish a close third with 76 points.  Trinity (110) and Hollis/Brookline (129) would round out the top five teams.

(Additional information:  It was great to see Jeri Blair, the race’s namesake, up from Florida.  Blair gets around with the help of a cane these days, but my brief conversation with him proves he’s still full of it.  Also ran into Lakes region legend coach Earl Mills, there to support the up and coming Newfound Bears.  Add in Scott Clark and John Goegel you’ve got well over 120 years of coaching greatness from the Lakes region.)