On Monday, we picked up with our team running in preparation for our meet at Belmont the following day. For our race prep, we did our normal 20 minute warm up, starts, and then a 20 minute cool down. We also talked about the course of the upcoming meet and focused on being in the right racing mentality, as well as how to utilize hills to our advantage. After that shorter practice day, we went home to get ready for the race.

Tuesday brings us to Belmont for our second full race of the season. The team did okay, the boys pulling off a win, and the girls sliding behind Gilford for second. That’s whatever though, the real stuff happened on the bus. On the way there the boys and girls were divided, both blasting music out of their bose speakers. Song choices at this point were debatable, as I’m pretty sure The Wheels on the Bus was playing at some point. Irrelevant. The real real stuff happened on the way back.  We stopped at a Market Basket for dinner, but before that the beans came back out for round two. Karaoke followed dinner, and continued until we made it back home.

After our meet, Wednesday brought a long run anywhere from 55-80 minutes, followed by strides and yoga walks. Both the girls and boys team utilized the road for this run, with both teams running into town and then back up to the school. Although different groups took different routes, we all managed to cover similar ground. Additionally, the weather was very nice, although a little hot. It was sunny and not very humid, which made for good running weather. When we got back, we did our normal 6 strides, yoga walks, and jump rope, which we all have gotten surprisingly better at as the season has gone on.

Thursday brought us to the first workout of the week, downhills. The team split up into groups to do the 20 minute warm up. The team then met up behind Highbridge on the playground to do Sam P Downhills. The fastest group did ten reps of downhills, while the slowest group did 6 reps. After the 20 minute cool down, the team went into the hallway to do the Benoit, our core workout of the week. After core, we talked for a while as a team, team bonding if you will, and then we parted ways for the day.

Our second round of 3 on 3 off’s took place on Friday. The weather was much nicer than before, and probably 20 degrees cooler. It was foggy as can be, and the course was more than a little wet, but improvement was seen throughout all of our athletes. Injury prevention completed the day. 🙂

After practice on Friday, some of the cross country team took a trip up to the White Mountains for a running-based camping trip. There, we ran up to Zealand’s Hut, a scenic trail that was 6 miles round trip. Throughout the whole trip we had a campfire filled with team bonding, lots of laughs, and of course adventurous running. This created a better team dynamic that will help us through our racing season.

On Monday, we picked up our training with a negative split run. Runners had the choice of doing a 40 or 50 minute negative split in which they would run somewhat uptempo for 20-25 minutes, then retrace their steps uptempo, in hope of cutting a minute off their time. It was a nice, sunny day, although a little warm and humid. After the run, we did footwalks and core to finish up the day. Additionally, we had a post practice meeting with a nutritionist who kindly donated their time towards us. They worked on giving us information towards fueling our bodies for our maximum performance, as well as how to refuel and regroup after said performances.

On Tuesday, we prepared for our meet at NHTI with race prep. We started with a 20 minute warm up, did 6 strides, and then finished with a 20 minute cool down. Despite the gloomy day, we tried our best to remain positive towards our meet the following day. We also made sure to talk as a team regarding our meet and layout our ideals for the week, something that helps to get the team in a good mindset towards the week.

Wednesday was wacky to say the least. 1.5 hours on a bus brought us to the campus of NHTI for Bishop Brady’s home meet, where our athletes promptly got lost. It started in the girls race, where our top runner missed a turn, ran an extra half mile, yelled at a volunteer who didn’t do their job, and came in ninth for our team. After that, despite the warnings, at least 20% of the guys in the boys race also got lost. I’m unsure as to whether or not any of them yelled at volunteers, but they did run what is estimated to be another ½ mile. The bean game continued on the bus ride back, only interrupted by our Hannaford’s stop. 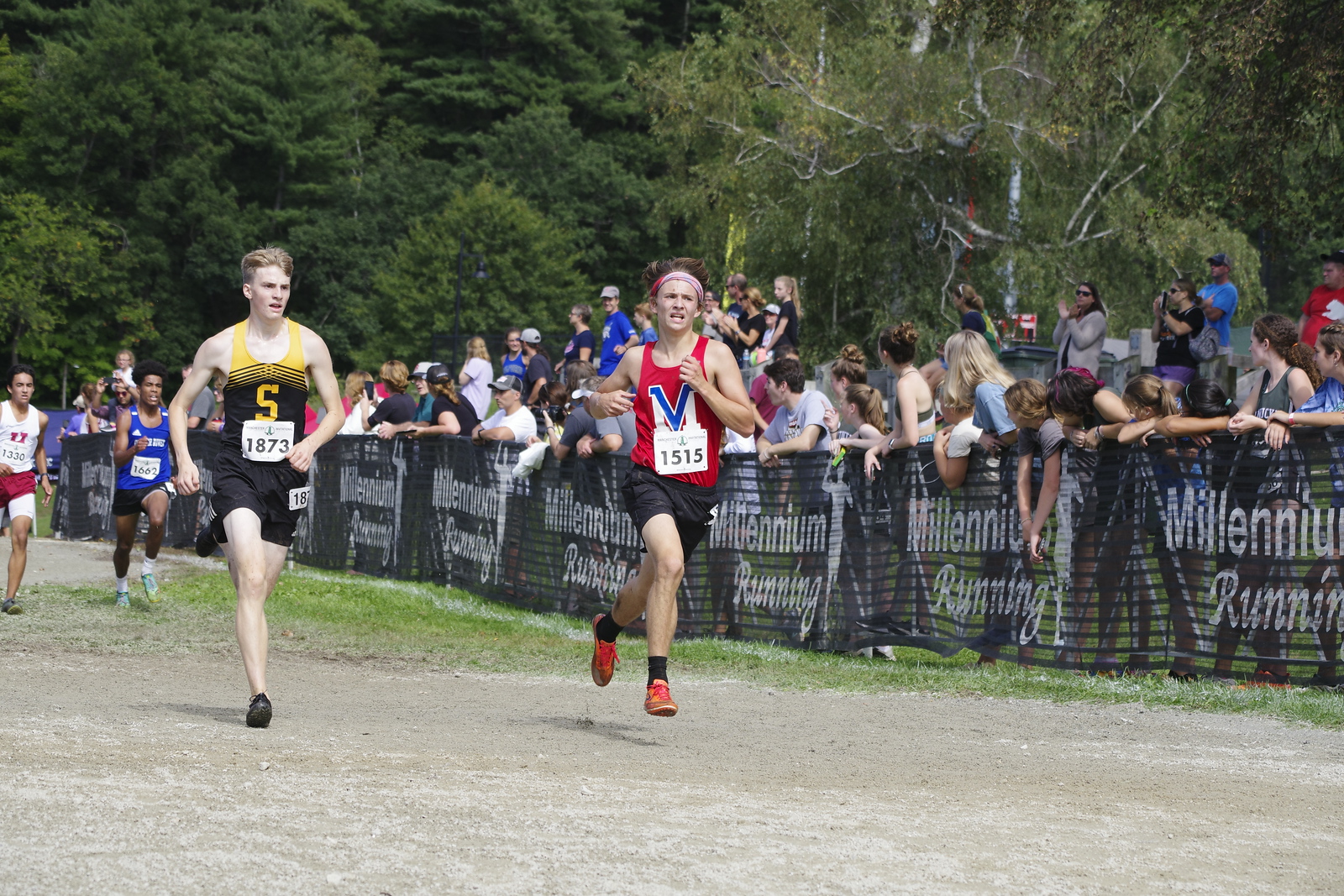 After our very eventful Wednesday, training resumed with a long run on Thursday. We went out for what will be our longest long run of the season, with runners running anywhere from 60-80 minutes. It was decent weather, though a bit humid, and we saw a large amount of running on the road. Many of our runners once again utilized the roads around town, as well as some trails that connect to these roads, in order to complete their long runs. After our runs, we completed our usual strides, yoga walks, and jump rope. Additionally, with jump rope being a regular part of our training, we have seen improvements, going from a tangled mess to actual jump ropers. After that, we were done for the day.

On Friday, we were preparing for the Manchester Invitational. In doing so, we talked about our game plan and then were sent out for a 20 minute warm up, starts, and a 20 minute cool down. It was pretty wet and muddy during this, so we had to be careful with our quick acceleration. We had a pretty short day of practice, and we made sure to be prepared for the next day.

On Saturday, we had the Manchester Invitational. Our bus left at 9am, so we’d be ready to race for our 11:00-12:30 races, depending on what race each individual was participating in. When we got there, we cheered on our first runner as she ran the C race. She ran a good race, even running the last straight without a shoe, but that was only the beginning of our adventure.

We then saw both our JV girls and boys race, mud and all, before the Varsity races went off. First, the girls Varsity race took place. Before the 1st mile mark, we had already hit a problem, our #1 girl lost her shoe in the mud, so she was now running with only one shoe. After that, we had the long haul up the ski hill, a downhill, and a zigzag around the park before the finishing straight. Our girls team saw a nice pack come in together, with only a minute apart between our 2nd and 7th girl. This allowed us to see our advantage, the pack, and where we need to improve, getting the pack 1-2 minutes faster.

Then, we saw the Varsity boys race, putting only 6 on the line, as one of our runners couldn’t make it. We saw our boys work hard to grind out the race, with our top runner coming in 12th place overall. However, like the girls, the race showed where our weak spots were. On the boys side, we saw the need for a sub 19 minute 5th runner, as well as how important our missing runner was. Both our girls and boys did their best, even though our runner’s shoe was never found.

All in all, we’re quite happy to have this one in the books.  There was some good, some not so good, and plenty we need to work on.  But it’s good to know what direction we need to head. Full Results – Courtesy of Millennium Running Interviews  PICS  MI47!!!  The festival had everything from individual battles to team battles to surprises […]