The girls D1 race provided one of the more exciting competitions of the weekend as the top 3 teams were separated by a mere 14 points with the top 2 only being 2 points apart.  Off the strength of their top 2 finishers, Eli Cross and Jillian Bergeron placing 3rd and 4th it was Cooperative Middle School with the 2- point win over Rundlett.  Also scoring for Cooperative were Alexis Paterna, Willams Austin, and Brianna Paterna. Just as deserving, Rundlett Middle School had all 5 of their scorers finish within 29 seconds of on another and before everyone else’s 5th.  Rundlett went 11th, 12th, 13th, 14th and 20th with Zadie Taylor, Fran Brown, Gianna Gualtieri, Mahalie Burdette and Madeleine Short.

Ross A. Lurgio only 14 points behind in 3rd led by individual champion Caitrin Duprey who clocked 12:31.  Mia Moranti 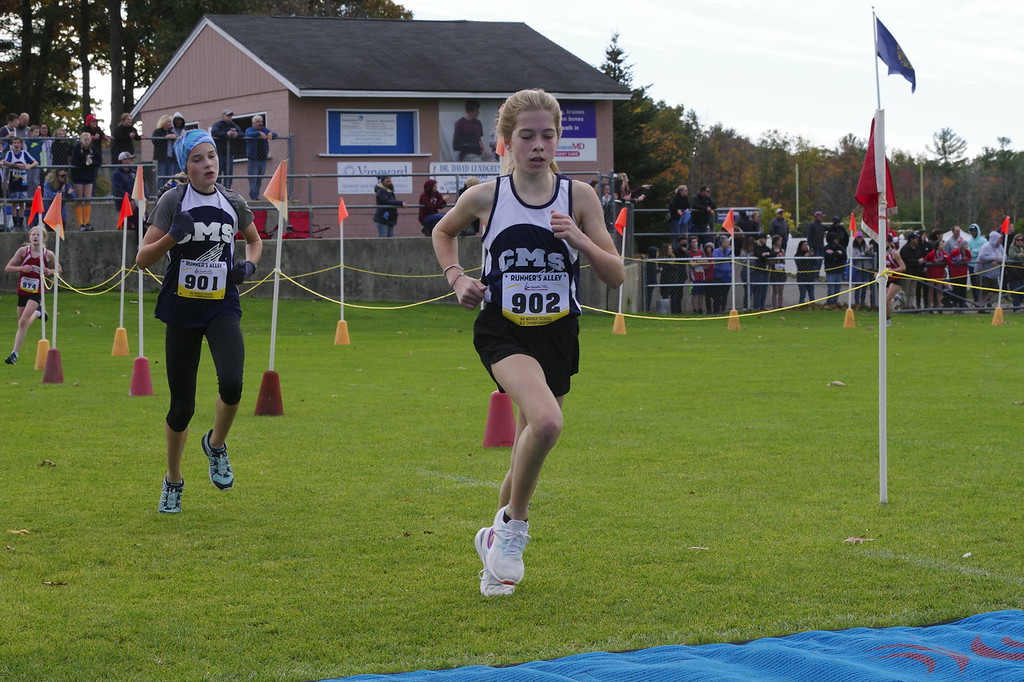 d 9th to support the effort and then it was their 3-4-5 scorers who truly made the difference as Raissa Caridade, Julia Malnar, and Abigail Durocher finished within 6 seconds of on another placing 22nd, 25th, and 27th.  Matter of fact Lurgio could lay claim to the deepest middle school team as their 6th, Aditi Jamkhande, and 7th, Genevieve Durocher, were done within another 13 seconds.

The boys D1 race was another close one with the top 2 teams, Woodbury and Rundlett,  separated by just 3 points.  Woodbury’s top 3, Brody Chisholm, James Sarsfield, and Eliot Chisholm placed 5th, 7th, and 9th within 12 seconds of one another to claim the state title. Along with 4th and 5th scorers Ryan Lopez-Whalen and Kyle O’Loughlin finishing 21st and 22nd the totaled  64 points to Rundlett’s 67.  Again, we have a team who was plenty deep as their 6th runner Danny Synder and 7th runner Alexander St. Laurent were within 10 seconds of their scoring 5.

Heading home with the runner-up plaque is extremely impressive for Rundlett.  Combined with the girls team,  it could be

argued Rundlett has the deepest middle school program in the state.  Led by third place finisher Josiah Conley, they placed all 5 scorers in the top 30 and with their 2-3-4 of Ian Mamos, Spencer Clemans and Ryan Casey coming in a fury placing 10th, 12th and 13th.  Joshua Gurtner placed 29th to complete their scoring.

Congratulations once again to Amherst Middle School girls team as they won the D2 team title comfortably scoring 46 points.  Led by a Samantha Swanbon and Bridget Hill who placed 1st and 2nd, Amherst proceeded to place their scoring 5 in the top 20 as Dylan Walker placed 11th, Olivia Faucher 15th, and Madelyn Mooney was 19th.  Add in that their 6th and 7th runners, Audrey 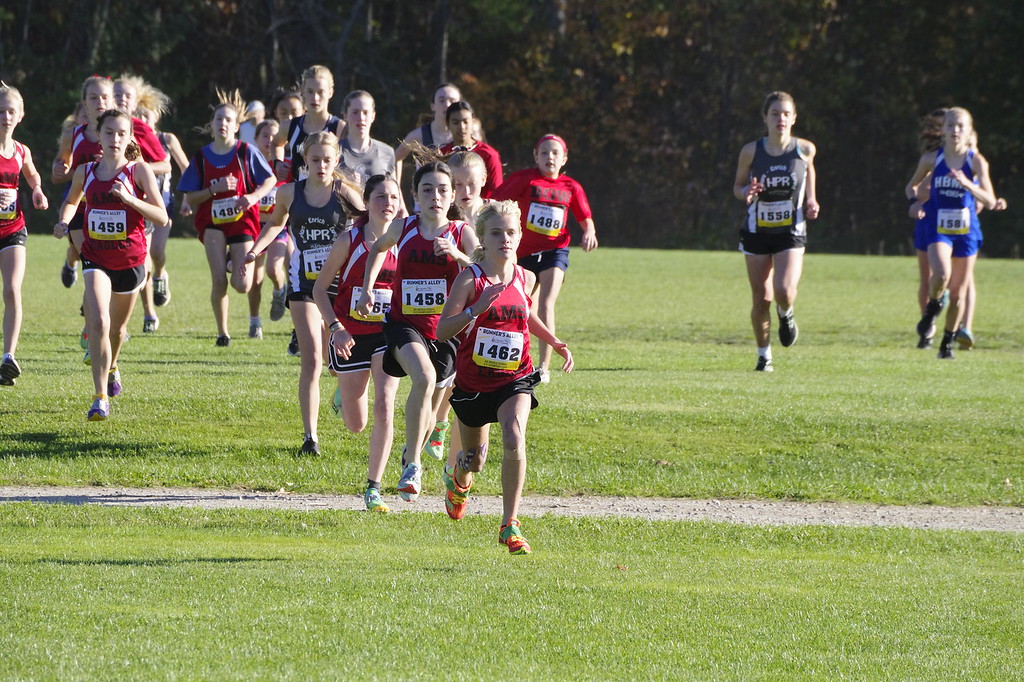 Pyles and Anora Swanson both came in the top 30 is a demonstration of dominance.

Hollis/Brookline and Oyster River would again battle it out in the boys race.  Placing all 5 scorers in the top 20 earned H/B the state championship in this one.  Totaling 65 points were Hunter 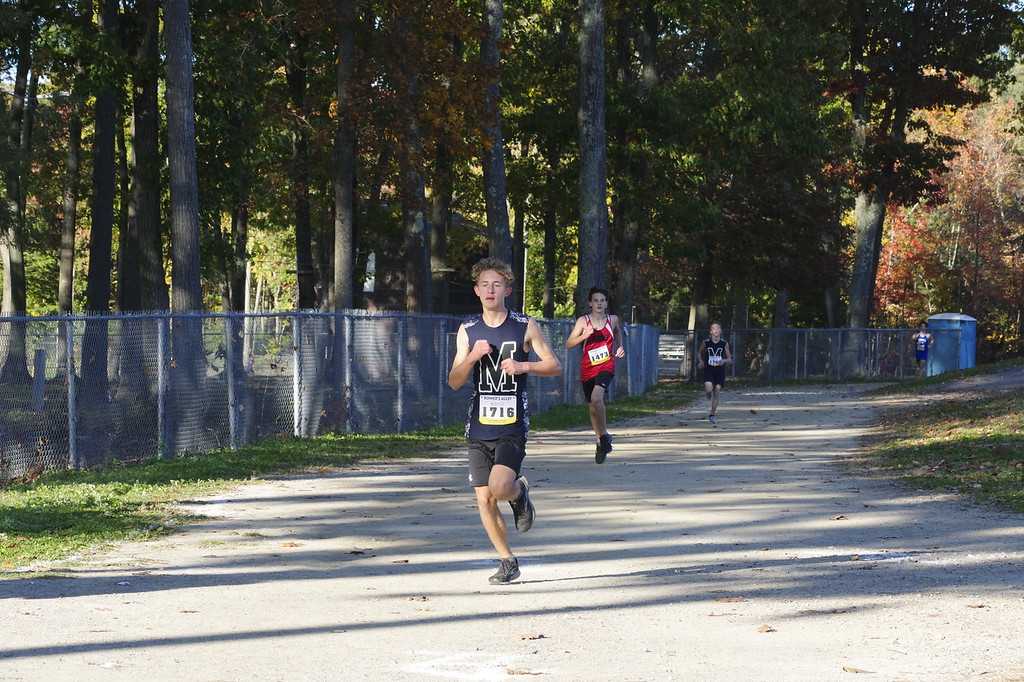 Individually, it was Milford’s Will Whitley taking the state title by 5 seconds crossing the line in 11:51.  His teammate, Milford’s Logan Korthals placed 4th just as his team did.  Completing the roll call for top 10 is Vincenzo Rufo of West Running Brook

Congrats to all and thanks to the Londonderry Community for once again putting on a first class event!!! Wow!  What a weekend of championship racing on the middle school level, which proved how popular and healthy our sport truly is […]