The 86th New England Cross Country Championships are Saturday at Thetford Academy in Thetford, VT.   All New England states except Massachusetts will be competing.  Each state is allowed 6 teams and any other individual placing in the top twenty five of their respective state meet.  The boys race first at 11:30am and the girls are slated to take off at 12:15pm.  With Thetford running much like Derryfield, we think that is an advantage for NH!  What do you think?? Bottom line, NH always stands united in our friendly competition with the other New England states!  So wear your NHCC shirts!  Cheer for one another!  We will be there snapping pics, recording races and conducting interviews!!!

This race is so interesting to me. There are many variables that could come into play that could change the outcome and many unknowns which could also determine how things shake out. Let’s start with the first piece which could make a difference. This year, out of the top 24 individuals I mentioned below, 16 of them are on teams that have qualified for New Englands. This may at first seem like no big deal, but this year it really could be. When the teams are looked at a little more closely I will try to explain this in more depth. There are also health issues that some top teams have had to deal with and uncertainty about what level those runners will be able to compete at. Finally the course and the weather definitely could throw a curveball at everyone if it rains Friday and Saturday.

Two of the favorites have to be New Milford and Glastonbury from CT. They finished 1st and 2nd at Woods Trail at Thetford with New Milford beating Glastonbury 92-125 BUT Glastonbury ran without Brooke Strauss who is a top 10 level talent. This could be a very tight battle between these two teams. New Milford has questions coming into the race even though they beat Glastonbury last weekend at the Connecticut Open Championship. Claire Daniels there #1 runner was just cleared last week after having a case of mono. She raced at the Open but was not in her normal positioning. Her race plan was altered and she did not try to push the pace like she could have when fully healthy. Does one more week make a bigger difference? Hard to know and this is one of the unknowns that I brought up at the beginning of this preview. How well she feels could have a huge impact on this race. If she is healthy then New Milford looks very strong based on their season’s results when their team is at full strength. Glastonbury definitely can challenge for this title but will need to close the gap with their 3-5 runners if they plan on challenging New Milford.

team being able to move up a few positions in their 3-5 runners.

East Greenwich is a team that is very intriguing. They have two elite runners in their 1-2 runners of Reese Fahys and Rylee Shunney. On paper they could both finish in the top 4 positions. That is a huge points gain for them right away if that happens. Shunney has the ability to finish very far ahead of any other teams #2 runner. That becomes an issue in a race this size and with the number of quality runners that are going to count in the actual team score. This is the point that was made in the beginning of this preview…there are more team scoring runners in the top end of the field than normal. Champlain Valley won New Englands in 2003 with their first runner finishing 41st overall but she counted as the 12th place scorer in the team race. That is almost impossible this year. East Greenwich could stockpile enough points from their elite 1-2 to pull off an upset in this race or to get on the podium. It really may come down to their 3-5 runners and can they get themselves into positions that will save them enough points. This is an interesting team to watch on Saturday.

The next teams will need some help to get into podium contention. Oyster River, NH, has been coming on at the end of the season but may not have the strength in the 4-5 spots. Dover, NH, won the Meet of Champions last Saturday but finished 3rd 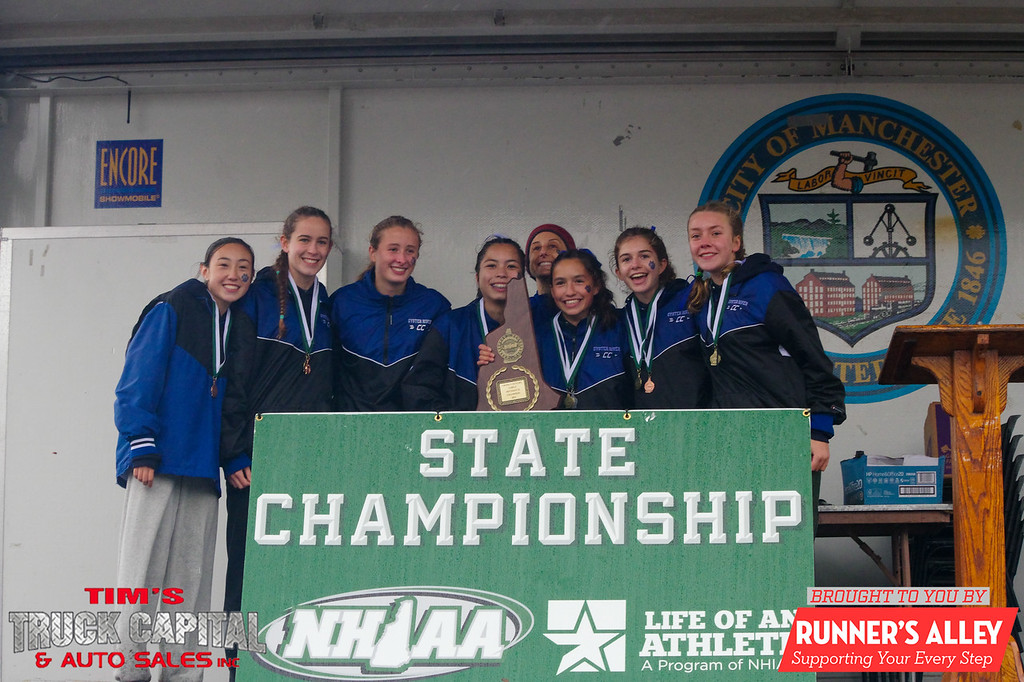 in the New Hampshire Division Championships. That result carries more weight to me because MOC was a flat and fast course and Derryfield is more physically demanding. Thetford is physically demanding! Keene is also an interesting team to watch for. They can, when on, run their group in a pretty tight pack. Those tight packs can make a big deal in a race of this size. They also have raced at Thetford earlier this season, so they do have prior experience there which could help them. Bonny Eagle, ME, has a very strong #1 in Delaney Hesler, but may not have a full grouping of 5 to offset the possible points which can be lost in a field this big.

Burlington and Harwood, VT, both will be looking for some Thetford magic to happen for them. Both teams are legitimate contenders for a top 10 and on a good day with things going right for them a top 5. Burlington is led by the duo of Rebecca Cunningham and Gillian Fairfax. The both have run very well at Thetford this season and will be looking to put their local course knowledge into action. Harwood is led by uber athlete Ava Thurston. Ava will be competing for a top 10 spot in the race and when Harwood is on, the gap between their 2-5 runners is pretty small. They will need to keep their gaps close if they want to contend for a top 10 spot or higher.

The team race is extremely interesting and should be fun to watch. There are so many variables that no one will know until the gun goes off and the race starts to play out. That’s why you run the race!

Claire Daniels, New Milford – 130 (just cleared a week ago because of mono)

There are some heavy hitters at the top of this race. Reese Fahys(RI), Ruth White(ME) and Rachel St. Germain(CT) all have a speed rating of 140 or higher and should be the three to watch. It will be interesting if one of them tries to set the pace from the beginning and get a little break early. The first 2K at Thetford can lead to some bad decision making because of the fast downhill 1st K and then the steady climb during the 2nd K back to the start area. Going out too hard usually does not benefit that runner when they hit the 3rd K and then Morty’s Monster in the 4th K. This could be a very interesting race in the top 5.

The next group includes Sophia Gorriaran(RI), Rylee Shunnee(RI), Caroline Cummings(RI) and, if healthy, Claire Daniels(CT). Depending on the conditions and race tactics anyone in this group could be in contention for a top 5 spot. Ava Thurston should probably be included in this list because of her experience at Thetford and that course knowledge could help her on Saturday.

The next group looking for All New England status and maybe to sneak into the top 10 will be Brianna Malone (NH), Thea Crowley(ME), Delaney Hesler(ME), Sydney Kessler(CT), Marykate Finn(NH), Brooke Straus(CT), Katherine Rector(CT), Alexa Ciccone(CT), Megan Randall(ME), Noral White(ME), Chloe Trudel(NH), Loghan Hughes(VT) and Alice Kredell(VT). This huge group is going to be trying to get themselves into the top 20 or at least a top 25 spot for all New England honors. This group is

where so many of the unknowns lie. When you are looking at the speed ratings for these runners they are all close and, usually, one speed rating point equals about 3 seconds so the majority of this group is separated by 15 seconds or less on paper. Add in the weather along with course difficulty and that makes it very challenging to guess where this group shakes out. Another example of why you run the race because races aren’t run on paper!

The girls close the show at Thetford on Saturday with a start time of 12:15 pm and this could be a very exciting race. One last factor to add to the uncertainty of the race is what condition the course will be in for the last race of the day. There will be about 250 boys running over this course before the girls race with rain forecast for Friday and some on Saturday. The field portions of the course could get very chewed up which will create another issue for these young women to deal with. It could create a few strength sapping sections of the course and some unsure footing especially on some of the downhills. One more day and they will get to prove it on the course and I for one can’t wait!