The 86th New England Cross Country Championships are Saturday at Thetford Academy in Thetford, VT.   All New England states except Massachusetts will be competing.  Each state is allowed 6 teams and any other individual placing in the top twenty five of their respective state meet.  The boys race first at 11:30am and the girls are slated to take off at 12:15pm.  With Thetford running much like Derryfield, we think that is an advantage for NH!  What do you think?? Bottom line, NH always stands united in our friendly competition with the other New England states!  So wear your NHCC shirts!  Cheer for one another!  We will be there snapping pics, recording races and conducting interviews!!! 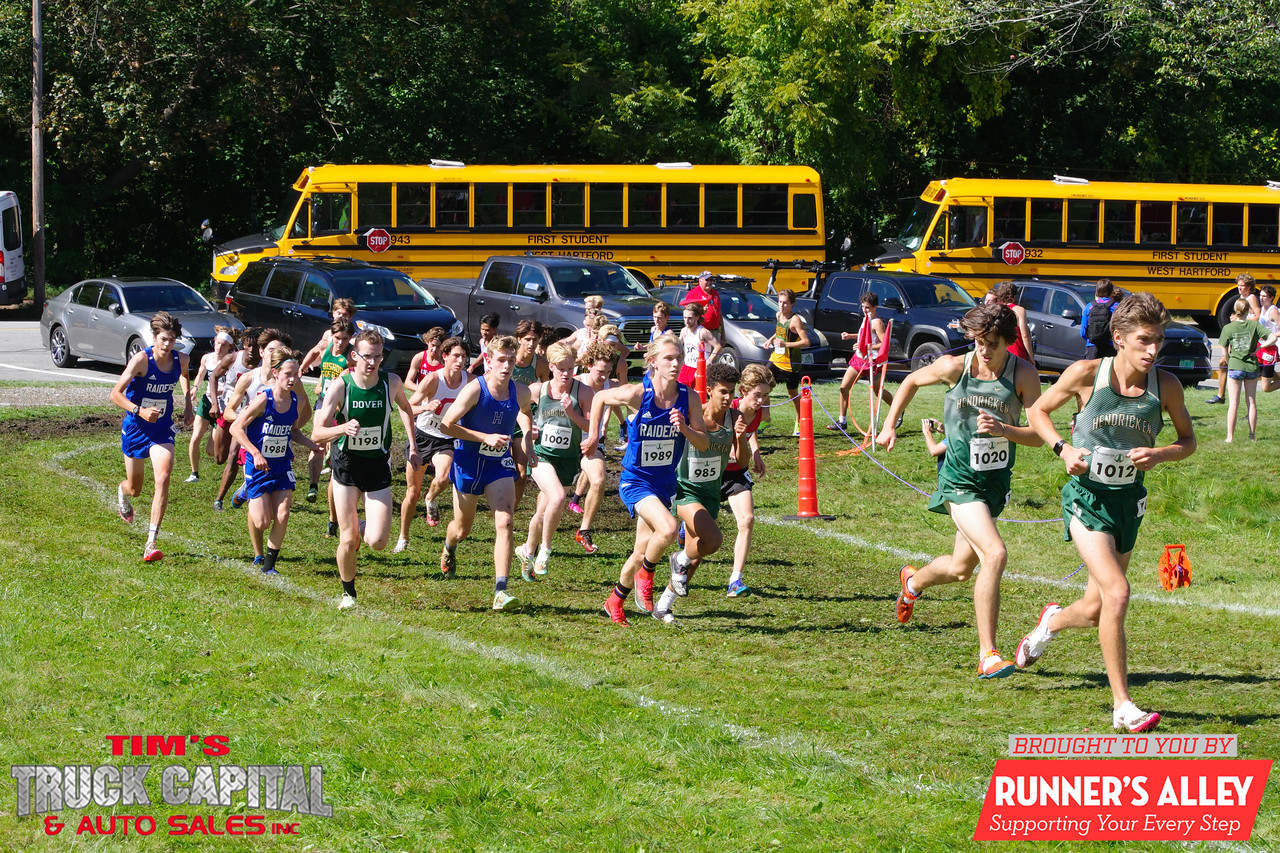 Ten teams for 3 podium spots. The favorites on paper probably are Bishop Hendricken. They just ran an amazing 1-5 split of 30 seconds and ran their entire 7 in a split of one minute. That is keeping your gaps close! They have plenty of regional and national experience with their program and will be ready to fight for the New England title. The one thing that could cause some issues is their lack of experience at Thetford. They went to Great American when the Thetford Invitational was happening so they have no race experience on the course. The course can definitely be an issue for some people because of the multiple challenges that it throws at runners.

U-32 (#5 in Northeast) will be seeking VT’s first boys New England Championship since Essex won it in 1987. They have the ability to run a tight pack also and they have the local knowledge of the course on their side. They have had 2 close battles with Bishop Hendricken finishing 2nd to them at the Manchester Invitational and beating them by one place at the boys Eastern States race at the Manhattan Invitational. The Beard brothers along with Ollie Hansen gives U-32 a nice top trio. The question will be can their 4-5 match Bishop Hendricken’s 4-5 runners. This could be a great battle to watch.

Along with U-32 there are a number of teams that could challenge for the podium if not the top spot. Ridgefield from CT is definitely at the top of this list. They ran an impressive :39 spread from 1-5 and won the Connecticut Open Championship last weekend. Like U-32 they have a very good trio upfront made up of Steven Hergenrother, Matthew McDonough and Jack Dovaras. They came in with only a 10 second gap between the three of them. That is something that can definitely help them to be successful this weekend. Xavier battled with them for the CT Open title and should be a threat here as well. They ran a :41 second spread from 2-5 and if they can move them up a little bit more that could make them a serious contender. Hall finished only 2 points behind Xavier so they need to be included in this conversation as well. They are again one of the teams that will be looking to move their 4 & 5 runners forward just a little bit. Ten seconds could make a huge difference on a course like Thetford.

Also from RI, La Salle Academy, a consistent regional and national level program, will be looking to make some noise. Two weeks ago La Salle beat Bishop Hendricken at Ponaganset for the Class A title but last weekend BH turned the tables on them and won the RI state championship. La Salle’s hopes may ride on the health of their #3 runner Phil Simas and whether he can compete this weekend after not being able to finish the state championship race because of an injury. Their top end with Jack Casey and Adam Thibodeauis very good and losing their #3 to injury would be a big blow to their possible chances at a victory.

Bishop Guertin and the Coe-Brown boys carry the flag for NH. BG beat Coe-Brown at the NH Meet of Champions on a tie breaker but the more important results to look at may be from the New Hampshire Divisional Championships the weekend before at Derryfield Park. Derryfield clearly is a course that is much closer to a Thetford type than the one at Mines Falls with some significant climbs compared to the blazing fast course last weekend. Even though the two teams didn’t race in the same race at the Divisional championship, Coe-Brown out paced BG in their 1-4 runners. The Coe-Brown five was :15 seconds a drift of the BG five but I can’t see how that could make up for being beaten at the 1-4 spots. Both teams have a shot and it will probably depend on the tail end of their scoring in the 4 and 5 spots.

This could be a great boys race that has the makings of being a race that will be hard to call who the winner is at the finish. It may come down to if a team that is close can move their final scorers up just a few spots and who will deal with the Thetford Academy course the best. There are a few of the contenders who raced at Thetford earlier this year but the majority will be seeing it for the first time and how they deal with the course could determine who is on the podium and who is on the top step! Oh and if it rains Friday and Saturday like the extended forecast is predicting…..all bets are off!

Based on highest 2021 Speed Ratings

Matthew Servin, Champlain Valley – 183(injured and out of the race)

Let’s start this with just expressing how AWESOME this race could be. The firepower at the top end of this individual race is pretty impressive and it would be pretty amazing if it were only the top 5 Connecticut individuals but there are guys who are pretty legit from the other states too! Some history needs to be looked at first before we get into this race. The Thetford course has only had 4 boys go sub 16:00 in the history(that we know of!) ever. The course record is held by Alex Osterberg of Darien, CT at 15:44.75 and he is one of only 2 runners ever to break 15:50. The other was David Principe of La Salle Academy, RI in 15:48.40. That’s a pretty solid duo! Could we be looking at 4 or more runners breaking 16:00 this year alone? It could possibly happen but may be contingent on what the conditions end up being like this Saturday.

The two Sherry brothers, Gavin (US#4) and Callum, (US#23) have to be considered on the short list of contenders along with Aidan Puffer (US#27). That Connecticut trio is closely followed by Michael Bohlke and Luke Anthony also from CT. These five are the only runners with a 2021 rating of 190 or higher. The interesting thing to watch will be how this group of 5 competes considering they have been running against each other all season and for years before this. That familiarity will hopefully lead to a great race that will also bring some of the other top contenders along with them to create a race that could be amazing to watch.

Aidan Cox (US-Honorable Mention)of Coe-Brown, NH has been showing impressive form of late and that is great to see after he suffered a midseason injury that may have pushed him back a bit. Hopefully Aidan has continued to feel well and progress and he will be able to be up in that lead group. Evan Thornton-Sherman (US-Honorable Mention) of St Johnsbury has the local knowledge to

help him. He had an impressive 5th place finish in Eastern States at the Manhattan Invitational and his toughness may carry him into that top group. Evan probably has run the Thetford course almost 10 times or more.  He isn’t that far away from the course, so he could come down to run it on his own almost any time he wants. This experience could help him in this race.

The next group all have a chance because races at Thetford can be, what’s the right wording, unpredictable. Abbott Valentine of Hampden Academy and Daniel McCarthy of Bangor lead the Maine contingent. Both come in with speed ratings of 185 and 184. That clearly puts them at the top of the next group shooting for top spots in this race. Devan Kipyego from St Raphael Academy, RI should also be put in this group. This is the group that can seriously benefit from the course being challenging because if runners in the group in front of them make any pacing mistakes they should be in position to take advantage of that.

The final group is runners with speed ratings of 180 to 182. On any given day these runners can definitely pop a race that will allow them to get into the top 10 or higher. This group includes three from Rhode Island. This trio is Henry Dennen(Cumberland), Cooper Michaud(Classical) and Antonio Capalbo(South Kingstown). Eamon Burke(Xavier,CT) is also someone to watch and is in the same rating area as the three from RI. Carson Beard(U-32, VT) rounds out the group of possible contenders BUT we always know that runners step up and run amazing races in high pressure situations. That’s the fun of this kind of race!

This race has the possibility of being an amazing race. We can all only hope that this race lives up to the hype.