All the hay is in the barn As the day approached, one quote in particular stood out among the others chanted in our ears. One remembered for many years has been: “All the hay is in the barn”. This couldn’t be more true. After weeks of training and months of thought, the week had come. It was time to put the
polishing touches on our training. Our hard work was to be shown during that fateful hour on October 30th.

Monday came as fervently as the past 11 weeks. We could wipe our worries of intense training, for it was time to taper and enjoy the crisp fall days. Enjoyment did not begin, however, for the miserable weather set in. The ground was saturated with the newly drenched rain and the trees took on a grayish tone. We gathered together again, with the anticipation of Saturday. It lingered in all conversations and nestled into the very front of our minds. It was off to the large cemetery again, to greet the ghosts of past training. As we arrived, the workout presented itself as a familiar one. We utilized the long, grassy hill up the bank to replicate the start of Derryfield. It was to make us comfortable with starting on an incline. Afterwards, we did two 800 meter repeats at race pace, and then a few 300 meters. One should imagine that after all this race pace work, we would know what it feels like. Trotting back to the school, we dived head long through the wind with a little skip in our legs. 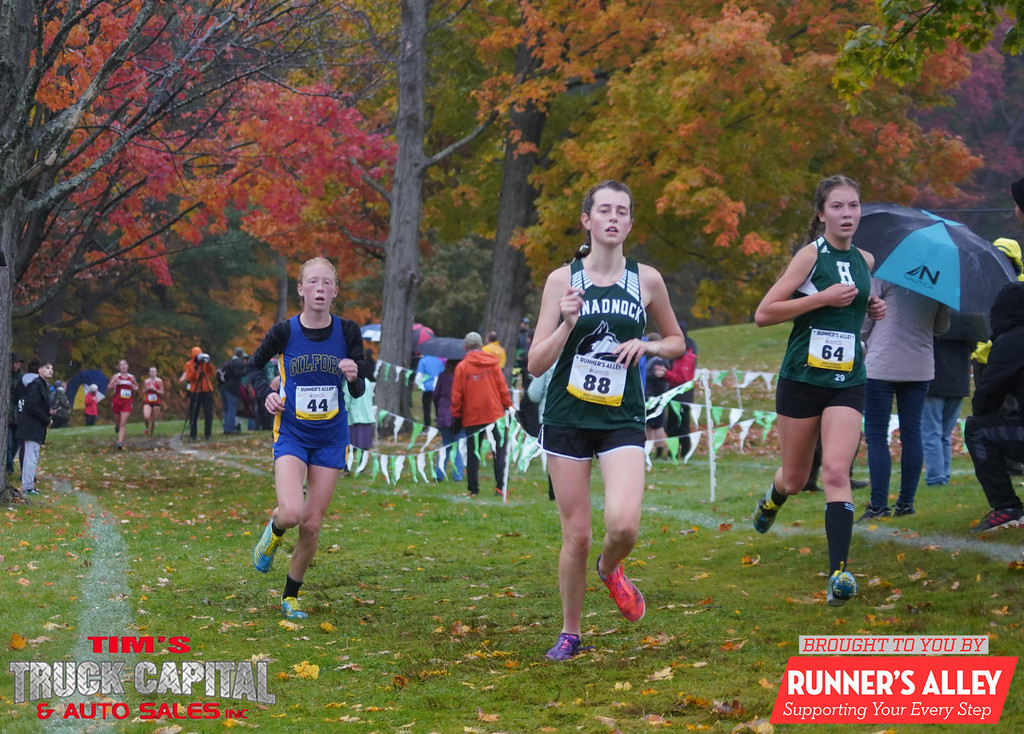 The next day was more furious than ever. The rain came pouring down on our moist hoodies and shirts. The temperature had increased slightly, but the large droplets dampened the soul. It was the easiest day we had in a long time. We only did a 30 minute run, and then stretched in the gym. There have been many speeches made to calm our nerves and sooth the beating hearts. Some have been encouraging, along with helpful. Yet, nothing seemed to help that aching feeling hidden in our throats.

Wednesday had come, and thankfully the rain had subsided. Though the sun did not greet us, we felt a bit better and attacked the mini workout without a grumble or groan. It began with a 12 minute warmup, splashing through the puddles and warming up our numb legs. Then, we went to the Mount Caesar Cemetery to do some race pace repeats.  The mist had just settled among the gravestones in a mysterious way. The air chilled us into ice as we did our dynamics. After wondering why our workouts transpired by graveyard so often, we jogged the 600 meter loop. It started up a grassy bank, and down through a single track trail in
the woods. We ran 400 meters race pace, and then a 200 meter “float”. What will this do for us?  I’m sure Coach would have a detailed, medical explanation, but a simpler one would be to feel our race speed. We cheered each other on after finishing the four laps and jogged down Simenuea Lane to the pavilion. Thankfully, we were allowed in the warmed gym to do some stretching, and talked about the race ahead. For nothing else took up space in our brain except Saturday.

Thursday was a beloved afternoon. The sun had peaked out from behind the ominous clouds and smiled down at us. It heated the air slightly, but gave a joyful look 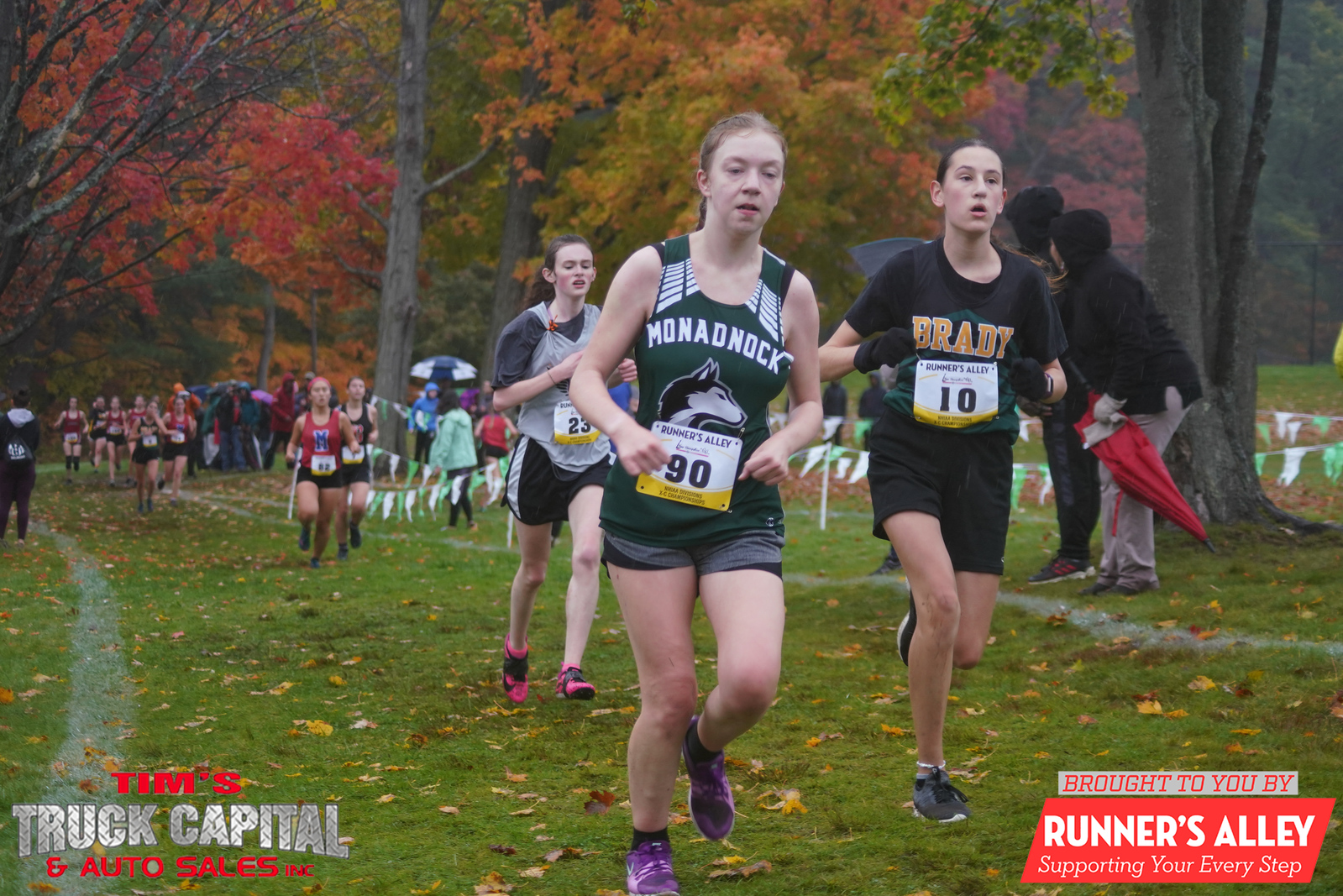 to the world. It dried the ground, and we had no more fears of slipping on the browned leaves. We got to run as a team, all squished together on the left side of the road. There were a few scary incidents with a car coming, but thankfully the girl’s screams warned the boys. Friday was as pleasant as the day prior. We were enjoying the practices with little running, and barely any core. We got to relax and enjoy the day before States. Yet, it was hard to relax with that thought that loomed over heads. The night beforehand was one of the hardest to sleep through. An image was played through your mind of what you want to do, or how much faster you could be. Asking us to get sleep was like requesting a child to slumber when shiny presents were under a Christmas tree. It was nearly impossible. Somehow, we made it through the night, and welcomed each other into the dry bus.

The weather reminded me of the State Championships just three years ago. The rain pelted down on our repellent coats and the cold numbed our fingers and nose. As we took shelter under the large green tent, the nerves continued to arise from our chest and shook our bodies. Or possibly, we were just shivering. Everyone on our team got on the line that day, and finished whether it was good or bad. Every athlete that competed had a story of how the race went. So naturally, I couldn’t share just a few perspectives or even my own. We all completed the 5k, though for some it was amazing, and for others devastating. We surprised ourselves with the girls team taking runner up, and the boys winning third place. It had been many years since the boys and girls team were all going to Meet of Champions. We excited ourselves over the trophy we won and swung the medals around our necks for a few hours. It was a day that will live in our memories forever. 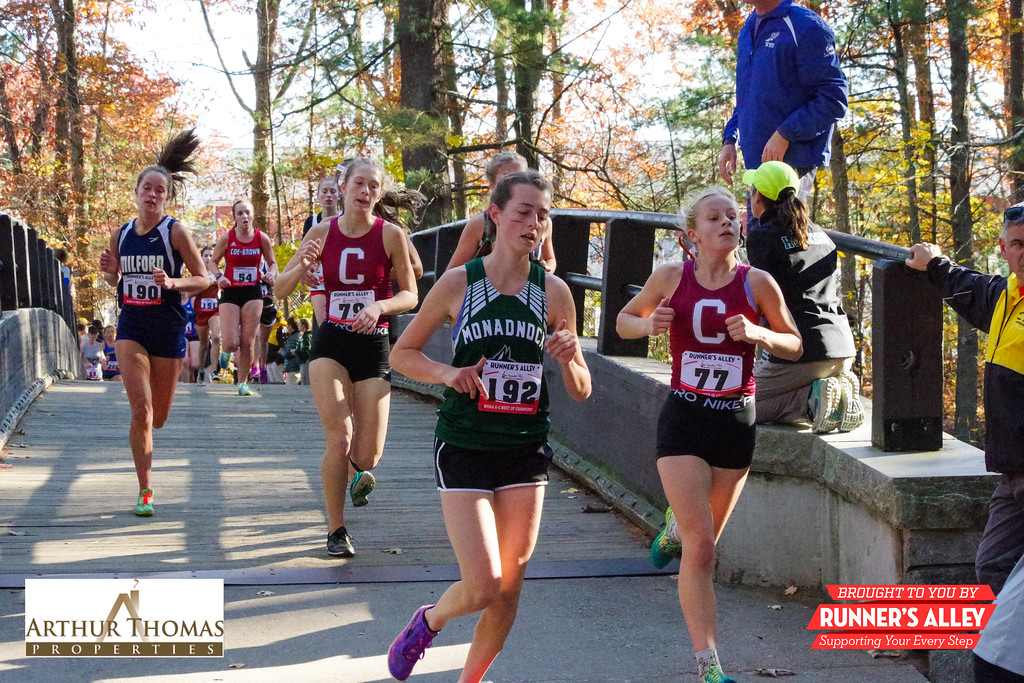 It was over. We all took a sigh of relief and remembrance of the race that transpired two days ago. It seemed so far away from Monday’s practice. We came  together, knowing we were in the last week of training. It wouldn’t be anything too intense for our exhausted bodies that had the scar of 3 months of work.
We ran directly to the start of the rail trail that traveled into Keene. The whole group stayed together, and did some dynamics once we arrived at our starting point. After that, we were to run two miles out easy, with a fartlek run all the way back. We were split into groups and each member got to run their race pace for 3 minutes, as everyone else followed in a line. There was a minute and 30 seconds of rest, and then the next person in line would lead. It was a very successful day, and the cold air flew by us. We talked about the prospect of the weekend. We didn’t really know what to expect going into it. Some had their speculations, and
others guarantees.

On Tuesday, the words that came out of Coach’s mouth shocked us with surprise. We all got to go on a hike up Mt. Caesar. We were extremely happy with this rest day and had some quality team bonding. The trees had developed a rusty color that swept through the valley. It was a clear day and the sun shone like a diamond in the sky. Late fall always has such beautiful weather, as the innocent wind concealed the secret of snow. Wednesday was the last day of doing anything at a relatively fast pace. It was a routine day with a 12 minute warmup and a little work on the track. We ran 4 by 300 meters with a sufficient amount of rest in between. After this, we ran 4 by 200 meters with the same break. It was to get our bodies ready to go hard. We were allowed one all out, final 200 meter sprint at the end.

By Thursday, the nerves were gaining speed, and everyone was talking of their goals and aspirations. The team got to go on a 24 minute run together. Normally, we

part our separate ways, but it was enjoyable to all be together for one of the last times. After almost getting hit by a car, we played some basketball by the old hoop left by the school. The day before Meet of Champions was our last practice. We all ignored this fact, and tried to have as much fun as possible before it was over. The cold, chilling air was quite different from our first practice. The season seemed so long, yet ended very quickly. We went on a slow, 26 minute jog. After finishing, we rolled out on the picnic tables and listened to the yelling voices of the guys playing basketball a few yards from us.

The last morning came as quickly as it went. The day was spectacular. The weather was perfect for cross country running. The sky was the color of a robin’s egg, and the sun shined gently across our faces. The air had a brief chill to it, but kept us perfectly comfortable while racing. The bus ride over was quiet, and ribbons were tied amongst the french braids. We weren’t expecting much, but simply wanted to try as hard as we could. Most of us were attempting a PR. Mines Falls was bustling with excitement and teams all across the state had come to be the best of the best. The girls went off at two thirty, and sprinted around the field. Our team was strung amongst many other colors. The first mile was very fast, as it mostly is on that course, and gave us a good position as a team. We took to the woods, and gained on our time, moving our legs faster with each stride. After finishing, our top three girls broke under 20 minutes for the first time ever.  Our team went in ranked 15th, and we came out in 11th. We were extremely pleased with this jump, and can’t wait to see what next year holds for our girls team. On the boys side, everyone  showed up and gave it their all. Our only senior, Mitchell Hill, finished his final cross country race with 16:48. After all the scoring was complete, they finished 14th as a team and were the first in their division.

After some Chick Fil A, and screaming Christmas songs at the top of our lungs, we said goodbye, for the season had ended. It was a bittersweet ending, with joy and sorrow mixed into one. We were sad to leave each other till August came around again. Many weeks of training were put into a few miles of racing. We will never regret all the pain we went through to get to our goals. Though the season is over, we look forward to the prospect of next year, and the happiness that will come from success. It will be many months before we meet again, but be prepared. In 2022 we will come in, ready to take over the new challenge that lies ahead.

This is Monadnock Cross Country, and we will see you next year!

This past season, my female captain Briana Boulerice, shouldered the duty of Mascenic team blog, and according to many of you out […] When did you start running? I started running in 4th grade. I didn’t start taking competition seriously until freshman year of high […]