MI47!!!  The festival had everything from individual battles to team battles to surprises and confirmations.  But the bottom line is, Manchester Invitational is still the granddaddy of them all!  Thanks to Millennium Running for putting on a first class event which truly celebrates and showcases athletes from all over New England. 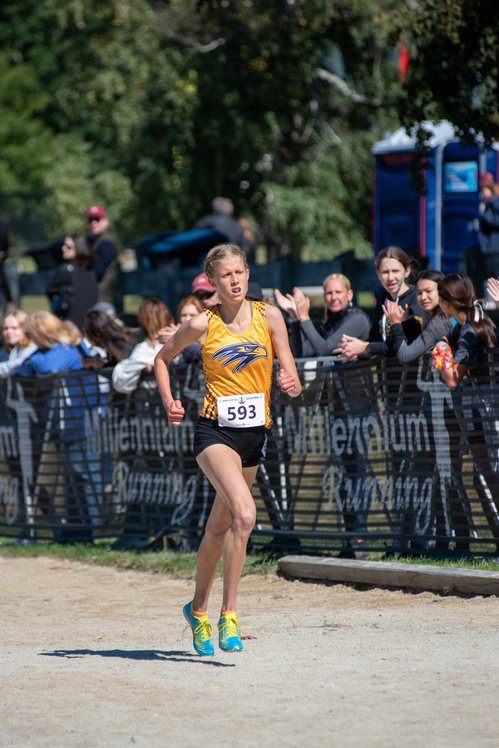 As mentioned in the preview, with so many schools and our friends from out of state, and without many results to go off of, predicting the outcome of such a melting pot of a race is tough.  This could simply be authorship cover for why I wasn’t too close to the actual outcome of the race.  But let’s get to it.

From the gun, Bow’s Susanna Zahn let it be known that she intended to lead every step of the race and was daring for anyone to try to match pace.  PCA’s Brianna Malone looked to ride in her slipstream, with York’s Cary Drake,  as well as the Oyster River duo of Haley Kavenagh and Mackenzie Cook.  This would hold true, with Zahn and Malone opening a 20 second gap by the mile.  However over the second mile, which she would cover in a quick 6:22, Zahn would find herself alone for the remainder of the race, bringing it home in a quick 18:16, a time that would have won the Large School race by 43 seconds.  Not bad for early season running.

Malone would roll through in second, in 18:45, also a time that would have won the Large School.  The duo of Kavanagh and Cook would run third and fourth and Hanover’s Lea Perreard would work her way through the field with Coe-Brown’s Sheldyn Fisher to claim fifth and sixth. Drake would hold on for seventh, with Plymouth’s Addison Englund, Bow’s Maya Brochu and Hopkinton’s Hannah Bennett also slicing their way through the field to round out the top ten.

On the team side of things, I overlooked entirely U-32 out of Vermont, as they rode roughshod over the field, with 137 points, putting their scoring five in the top 70 for a nothing-fancy win.  Oyster River carried the NH banner led by Kavanagh and Cook scoring 151, twenty points up on D3 Hopkinton.  VT’s Harwood would score 202 to Hanover’s 213 points. 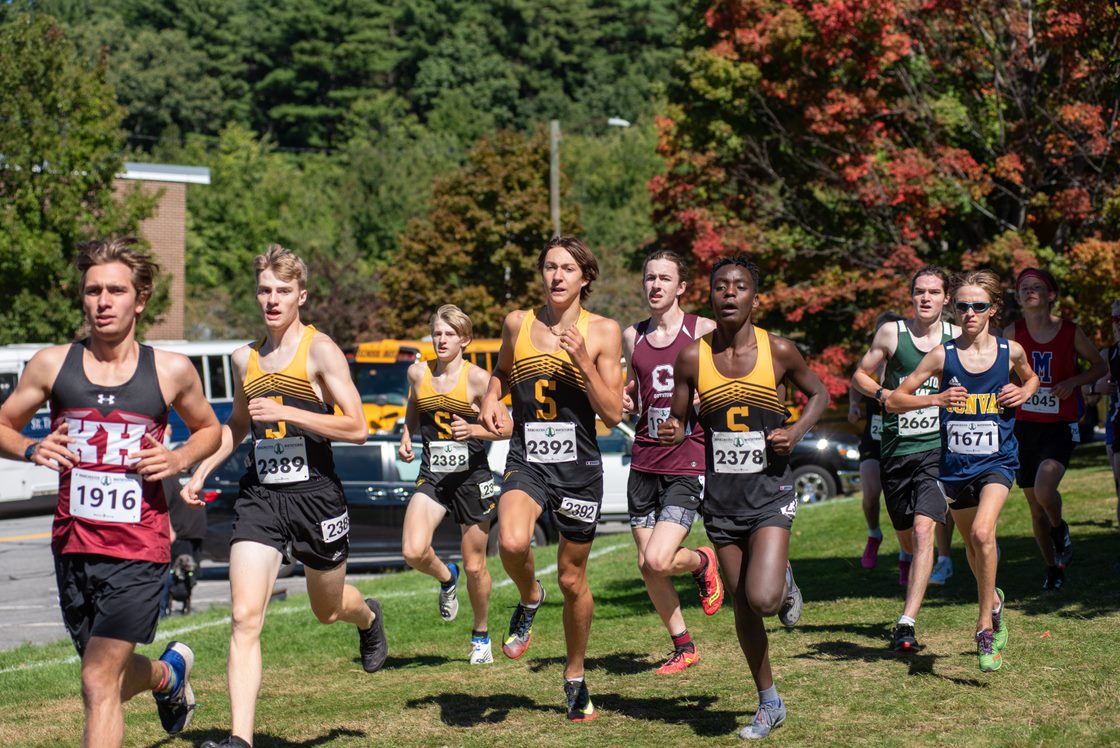 The boys race went a little more like predicted, with Gilford’s Patrick Gandini and Lebanon’s Birhanu Harriman the first two through the mile.  Word had it that Gandini was looking to push the second mile up-hills but within the first mile Harriman sank up to his knee in the infamous mud-pit at the turn by the tree and Gandini decided to pounce.  Leading by five seconds at the mile, Gandini would keep the pedal to the metal, crossing the line in 15:58.  Harriman would follow 22 seconds later with Oyster River’s Chris Jernigan 23 seconds after that.  Portsmouth Christian’s Jonas Teeter would be fourth, Oyster River’s Henry Hagen fifth and freshman Monadnock runner, Peyton Joslyn in sixth (impressive!).  Ben Daniels of Hopkinton would lead Jaren Noorda of Souhegan, Lucien Gleiser of Hanover and Zed McNaughton of Woodstock into the final top ten spots.

Team-wise, and a bit of a surprise to everyone but themselves, unranked Souhegan would make quite the statement to win this one with some great team running.  Scoring their TOP 5 in the top fifteen with Noorda (6th-17:10), Owen Stine (9th-17:31), Dallen Noorda (12th-17:37), Finley Irvine (13th-17:38) and Taloosh Anderson (14th-17:41).  That was a 31 second spread to score a scant 54 points.  Beyond them Oyster River would benefit by Jernigan and Hagen’s front running, scoring 101 points.  D3 Trinity and Mascenic would come in next, with Trinity (143) over last year’s D3 champs (Mascenic 216 points.)  Unheralded Goffstown would finish fifth with 231 points, capping a NH sweep of the top five spots.

The more things change, the more things stay the same is the saying right?  Well, another Manchester Invitational and another Champlain Valley, VT win.  Led by

Alice Kredell’s 2nd place finish in 19:08 and Estelle Laird’s 19:46, CVU put on yet another clinic winning with 78 points.  Further, the team-pack running concept was truly demonstrated as their 3-4-5, Amelie Scharf, Charlotte Crum and Audrey Nielsen all finished within 7 seconds of each other, 20:39-20:46.

The closer team battle was certainly between NH teams.  Phillips Exeter Academy (PEA) edged NH#1 Bedford by 6 points to place second in their MI debut.  Led by Tenley Nelson’s 19:57 and Daria Ivanova’s 20:10, PEA had a similar 3-4-5 pack time as CVU of 17 seconds.

Hats off to Bedford to make  podium placing 3rd.  They proved they are the top team in the NHIAA and they have all the ingredients to stay there.  They have the low stick as Fiona Lee placed 5th in 19:28.  They have the pack behind her as Sophie Mooney, Mia Moranti, Abigail Durocher, and Kelseigh O’Neill ran within 30 seconds of each other to all place in the top 40.  Add to this their DEPTH as their 6 and 7 yesterday, Caitrin Duprey and Collette Sneau were not far behind!  Look for big things from this squad as the season progresses.

Tip of the cap to Keene’s 4th, as placing top 5 at Manchester is extremely tough.  They were buoyed by their top three, Reagan Hoy, Aly Farris and Lily Runez who collectively crossed the finish line 20:29 to 20:44.   Not too far behind Keene, Dover, placed 6th out of 22 led by Isabel McIntyre and Alyson Bortz.

Individually, congratulations to LaSalle Academy’s Caroline Cummings who outdueled Kredell to win in 18:59.  We are sure she gained the strength for this from her time at a camp in the Granite State this summer!  Mt. Mansfield VT’s Tess Drury was third, followed by Essex VT’s Scarlet Stimson.  The aforementioned Bedford’s Lee was 5th and the top NH finisher a few strides ahead of Pinkerton’s Contessa Silva who placed 6th. CVU’s Laird was 7th, Burlington, VT’s Gillian Fairfax was 8th.  One of the surprises would be Portsmouth freshman Mia Scherr placing 9th in 19:56 out-leaning Dover’s McIntyre to complete the top ten.

You know what’s fun about writing preview articles? You never know what’s actually going to happen and today’s large school race was certainly a great example of that. 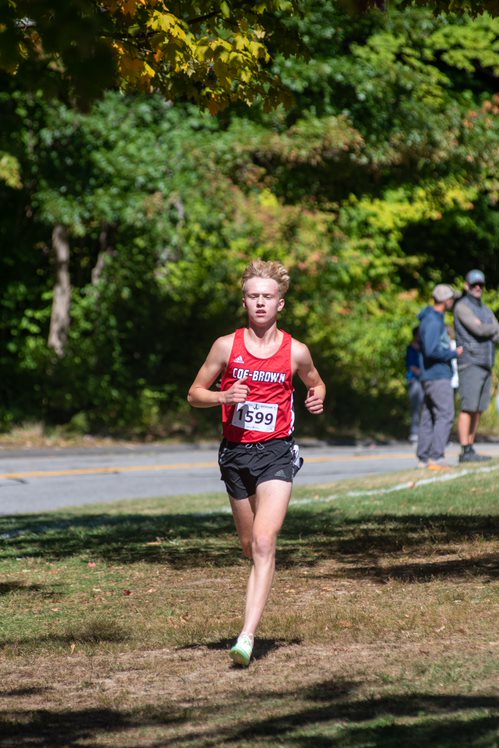 On the team side, Bishop Hendricken pulled off a clear team victory with their entire top five finding their way under 17:00 minutes on the challenging Manchester course. At the two mile mark their lead runners, Troy Silvestri and Keegan Tierney were running 2nd and 3rd overall. They ended up placing 2nd and 7th, which is a great reminder of how much those second mile hills can take out of you if you go out too hard. We definitely see why BH has a national pre-season ranking and they may be the team to beat in New England come November. William Hall from Connecticut, the biggest cross country I’ve ever seen in my life, also had an excellent showing coming in just 15 points behind BH.  Their scoring varsity was also all under 17:00. Led by Isaac Mahler’s 4th place finish in 16:14, they may have found their way into the regional rankings after a great second place effort.

Focusing on the New Hampshire teams, Coe-Brown came out as expected leading with a fourth place finish. Aidan Cox was excellent in his first big meet crushing the field by a full 30 seconds while running the race effectively unchallenged from 400m to the finish in 15:20. It was a little disappointing to find out that the other top guys mentioned in the preview had decided not to race as you can’t help but wonder if they could have pushed under Ben True’s 15:17 meet record.  800m into the race and it was already over.

Coe-Brown’s 2-3 of Tyler Tkaczyk (9th-16:23) and Jamie Lano (14th-16:38) also ran very well coming up in the mid 16’s and as two of the faster NHIAA runners. With Nikhil Chavda (42nd-17:12)and Liam McLean (74th-17:46) stepping up, Coe-Brown beat New Hampshire’s next team, Nashua South, by 239 points, so at the moment they are the clear leader of the state.   Looking forward to the merges once they come out on Monday!  Led by Daniel Byrne’s 17:16, Nashua South ran well with a spread of less than a minute, and held off the rest of the NH field but just barely beating Pinkerton by ONE point with Concord only trailing by 13. Pinkerton was led by Theo Davis who crossed in 17:12.

Division I appears to be setting up to be an absolute battle this year and I would not want to be the guy who has to write that preview in a few weeks! Well, I am the guy, but I wouldn’t want to be! South and Pinkerton are running very similar teams; both relying on solid depth to be successful. How similar? Their total race times for their scorers was only SIX SECONDS apart. Throw in Concord? They were 13 seconds behind Pinkerton. Pinkerton and South are going to see if they can get one of their top runners a little closer to the front of the race and that could be the difference maker for either one. Concord’s freshman Josiah Conley continued to have a great rookie season coming in 22nd in a very competitive individual race and was the 6th individual runner from NHIAA. Rounding out the New Hampshire top five was Bishop Guertin, who got another outstanding race from sophomore Matt Giardina. Giardina moved right up with the front pack from the start and held his own the entire way to take 5th in an excellent 16:15.

A couple of NHIAA individuals who had great races were Londonderry’s Sean Clegg who was a little disappointed with his showing at the Nashua Invitational and clearly brought his “A” game to Manchester as the fourth NHIAA runner.  He somehow ran faster on the difficult Manchester course than he did at Mines Falls. A runner to maybe keep an eye on over the next month is Alvirne’s Nick Marcotte who was the fifth NHIAA runner and he took an excellent 20th place.