By the end of the season practices and week day meets are often completed in the waning light of the day.  However this Friday, at the Cheshire Fairgrounds, the running and racing will be happening intentionally once the sun has gone down.  With a 7pm start for the girls race, the double loop course will be illuminated by the lights usually used for the county fair, giving this race a different feel than most cross country races.  Couple this effect with the flat, fast course and you have the makings for an exciting night of racing in Swanzey.

The girls race is looking to be spectacular, with arguably three of Division 3s strongest teams.  Hopkinton, currently ranked #5 in New Hampshire should be the obvious favorite.  Fronted all season by Hannah Bennett and Shaylee Murdough, the Hawks are definitively the benchmark of the division.  We’ll see if these Hawks are Nite Hawks.

Looking to give them a challenge is NH #8 Mascenic.  The Lady Vikes have been getting better every week, heading up to the Lakes region twice for the Newfound and Belmont Invitationals and walking away with the win.  This year’s addition of the O’Shea twins, Erin and Kaitlin, took a very good squad and made them even better.  Can the Vikings sail their way to a victory?  It will be interesting to watch as I hear the Vikings have some special they are going to reveal on October 7th.

Host school Monadnock has one of the best teams in Division 3, and considering the previously mentioned schools are in the top ten

that means Monadnock is a team to watch as well.  Probably having the strongest first four runners in any D3 program, Monadnock is working on developing a credible fifth, and if they do they will be deadly.  With sisters Summer and Anna Bentley, Alyssa Hall and Sadie Gibson leading the way I expect the Huskies will find a way to get things done.

Division 1 Keene wants in on the night time action, having taken part in Monadnock’s night time track meet back in the spring and wanting more.  Rumor is they will be racing their B squad, as their Varsity squad is taking a trip down to recon the New England course in Ponagansett, RI.  Even though they will be without their top seven I figure Keene will be looking to show their stuff.

And crossing the river to survey the situation is Brattleboro.  Led by Ava Whitney, the Colonels will be looking to make the trip worthwhile by competing for the win.

Individually I expect the fearsome foursome from Monadnock setting the pace, with the O’Sheas, Bennett and Murdough, and Whitney making up the chase pack.  After that I expect some configuration of Hopkinton and Mascenic, along with a Keen contingent looking to sort out the rest of the scoring places. 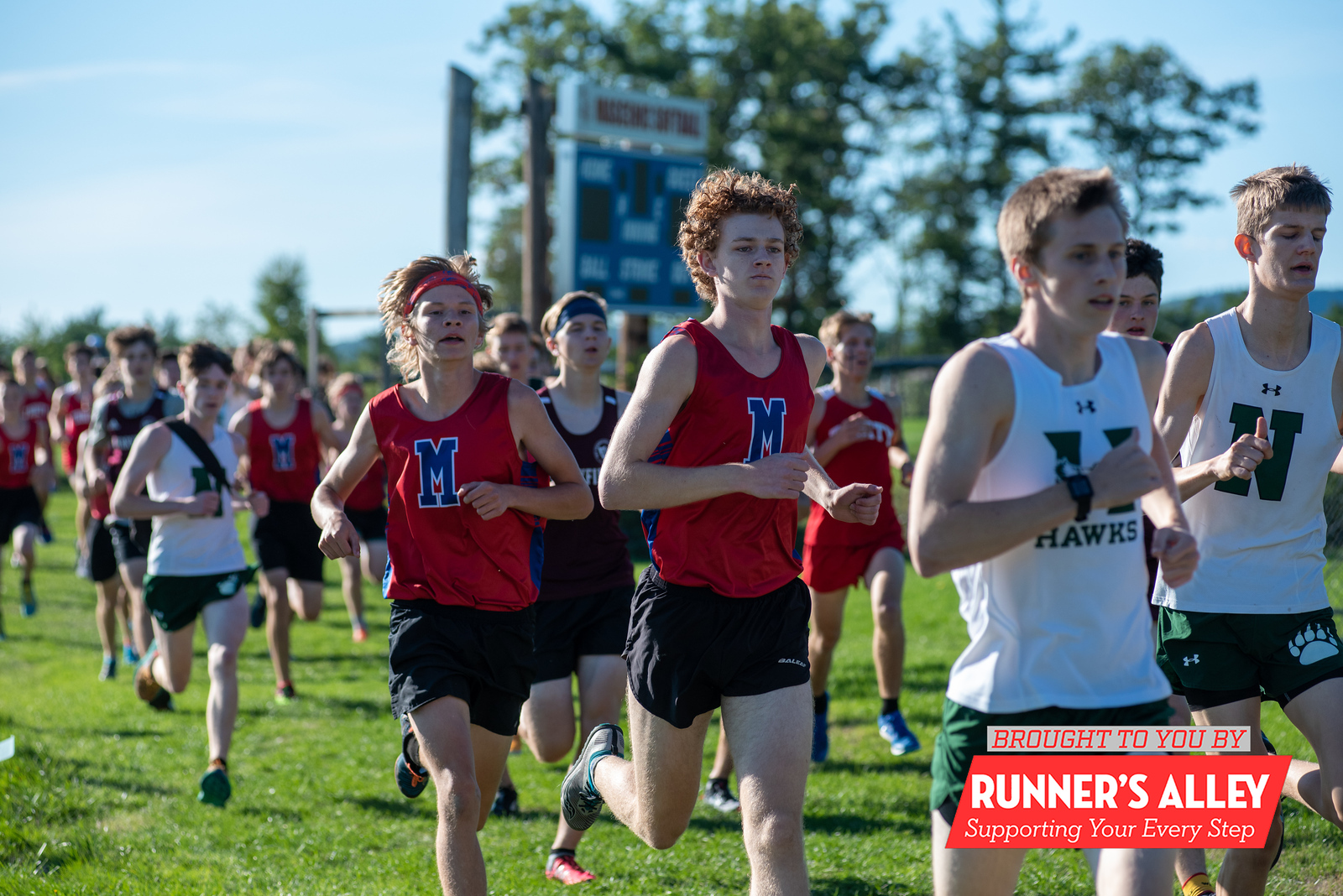 NH’s #6 Keene looks to be the class of the field in the boys race.  Having run some pretty fast times at the Amherst Invitational two weeks ago, the Blackbirds should be well suited for the flat, fast Monadnock course.  Led by Sully Sturtz and Ian Cardinale, the Blackbirds should have the firepower necessary to get the job done.

Behind Keene is likely to be D3’s Mascenic.  Led by Drew Traffie and Ryan O’Shea, the Vikings have been working this season to fill in the gaps after their top two.  Winning at Newfound two weeks ago, the Vikings have been making steady progress and are looking forward to the opportunity to be on a course that runs fast.  Toss in a bit of Norse mythology and the rumor that Vikings would go berserking on a full moon, maybe, just maybe, the Vikings be able to conquer the competition.

Newfound will be looking to continue their improvement over the season as well.  Finishing second to Mascenic at their Invitational, the Bears have a solid group of guys with some good grouping, but they’ll have to move up the pace to play a factor against the aforementioned teams.  Led by Evan Foster who likes to take the races out, and Jeremy Huckins and Ben LaPlume providing support, we’ll see if the Bears can make some inroads on Mascenic and Keene.

Individually, Sturtz is the favorite.  However I expect him to be shadowed by Monadnock’s Peyton Joslyn.  Behind them I expect Traffie and O’Shea, Monadnock’s Jace Joslyn, Hopkinton’s Ben Daniels and Matt Clarner, Cardinale and Foster to make up the chase pack.

Part 2 THE OTHER TRIALS In the spring of her senior year, foregoing high school track, Schiro won the Boston College Relays […] One thought on “Moonlight Madness Preview”