For all meet information, pics, results, interviews from past years and this year!  Check out our Battle of the Border Meet Hub!

The 18th Annual Battle of the Border Invitational between Massachusetts and New Hampshire will be held this Saturday, October 8, 2022. This year’s meet, at Alvirne High School in Hudson, New Hampshire, is looking like it will be hard fought, matching some strong teams and individual runners. This meet is a traditional invitational, but the superior state is determined by placement of the top 5 teams from their respective states.  NH has won the last 4 years!!  Let’s Go!!

The obvious new wrinkle this year is the fact Meet of Champions is also going to be held there!  This has caused a number of NH teams to alter their schedules to make the Battle this Saturday!  The level of competition and purpose just went up!

On the girl’s side, expect the lead pack to be heavy with runners.  With the addition of Oyster River, expect Haley Kavanagh and Mackenzie Cook towards the front.  Where they are, Coe-Brown’s Sheldyn Fisher and Hanover freshman Leah Perreard are never too far behind.  Throw in Pinkerton’s Contessa Silva as well as Portsmouth’s Mia Scherr, as well as Dover’s Alyson Bortz and Isabelle McIntyre.  The top runner from Massachusetts has to be Haverhill’s Finleigh Simmons.  Expect her to be in the front pack challenging for the “W”!

Two weeks removed from the Manchester Invite results, expect the ranked teams of NH to get shook up a tad after 2 weekends of meet, this included.  NH boasts 4 teams currently in the NHCC’s top 10 rankings with #3 Oyster River, #4 Dover, and #6 Hanover, and #8 Pinkerton all making the trip.  Throw in previously ranked teams like Winnacunnet and other strong squads, well the border battle may be overlooked this one year. 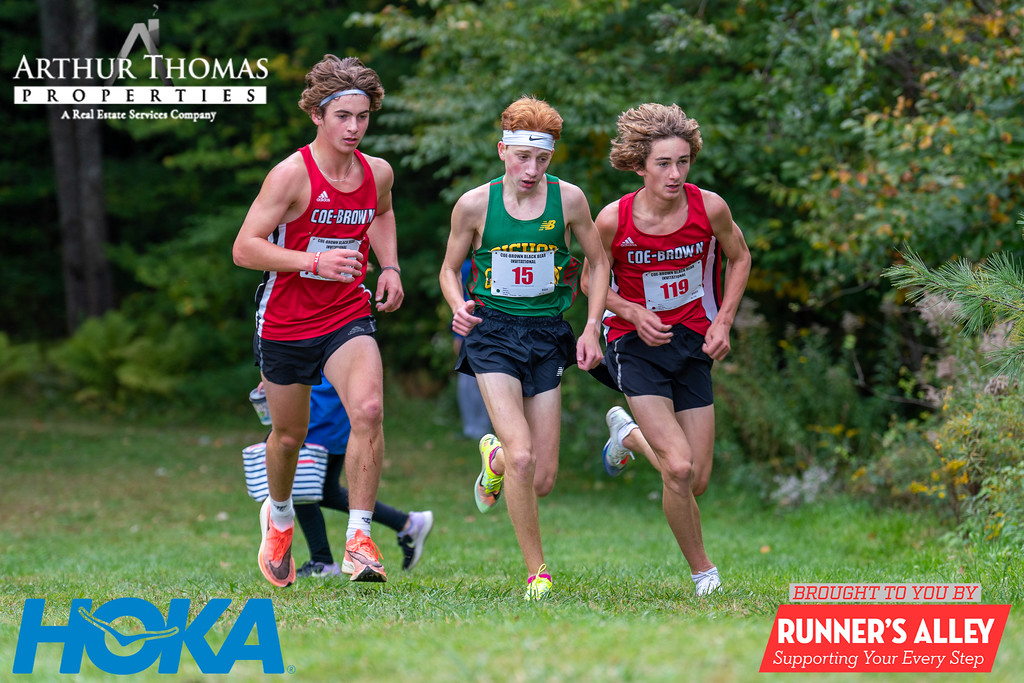 On the boys’ side, the field will be led by CBNA’s Aidan Cox.  With the MOCs being moved to Alvirne, we may be missing out on him making history once again at Mines Falls, but expect him to be on full recon mode as he hasn’t raced this course since freshman year when he ran 15:50.  Chase pack will include his teammates Tyler Tkaczyk and Jamie Lano as they have been falling into great battles with Bishop Guertin front man Matt Giardina. Expect Londonderry’s Sean Clegg and Ryan Fortin, as well as Alvirne’s Nick Marcotte, Oyster River’s Chris Jernigan and Henry Hagen to join them.  Looking to make the jump to the front pack will be Merrimack’s Cameron Fredette, Pinkerton’s Theo Davis, Portsmouth’s Avery Crowell, Hanover’s Lucian Gleiser and South’s Daniel Byrne.

Team-wise, although NH-1 Coe-Brown will down one of their top 5 runners as Gavin Demas continues to recover from sickness, but at Manchester Invitational, where he was their 6th man, they were comfortably NH’s top team.  We would expect to see more of the same.  They have the low sticks in Cox, Tkaczyk and Lano along with the hard charging Nikhil Chavda and the continued development of Max Lemay.  They should have a comfortable lead.

Chasing them will be a pack of schools as NH-3 Nashua South and NH-4 Pinkerton continue their season long discussion as to who will be the top D1 team.  South seems to get the nod with a pack time consistently under 1 minute.  Pinkerton is right behind them with a pack time around 90 seconds.  We will see what the relatively flat course of Alvirne will do to this match up.  Throw in NH-5  Oyster River led by Jernigan and Hagen, NH-9 BG led by Giardina and NH-10 Windham led by Logan Carter and we have 6 of the top 10 ranked teams in the Granite State!  The rankings will have changes after this weekend!

NHCC will be there snapping pics, recording races, posting on Instagram live!  We will also be selling NHCC tees with proceeds going to support the website!  Thanks to all for the support!

Our friend at Lancer Timing will also be there, which in and of itself means this is a top-rate meet! By Scott Maxwell Full Results With full sunshine and temps in the mid-70’s, the 2021 Pelham Invite provided outstanding competition between all […]