BoB22 Meet Hub – photos will be up soon!

As hoped for, the 2022 Battle of the Border was filled with phenomenal competition throughout all of the races!   Not only was the competition fierce in the traditional sense, but the added element that MOCs will be held here in about a month, provided that extra layer of urgency.  An urgency which yielded results.  Results which will assuredly shake up the rankings!  While our friends south of the border were few in 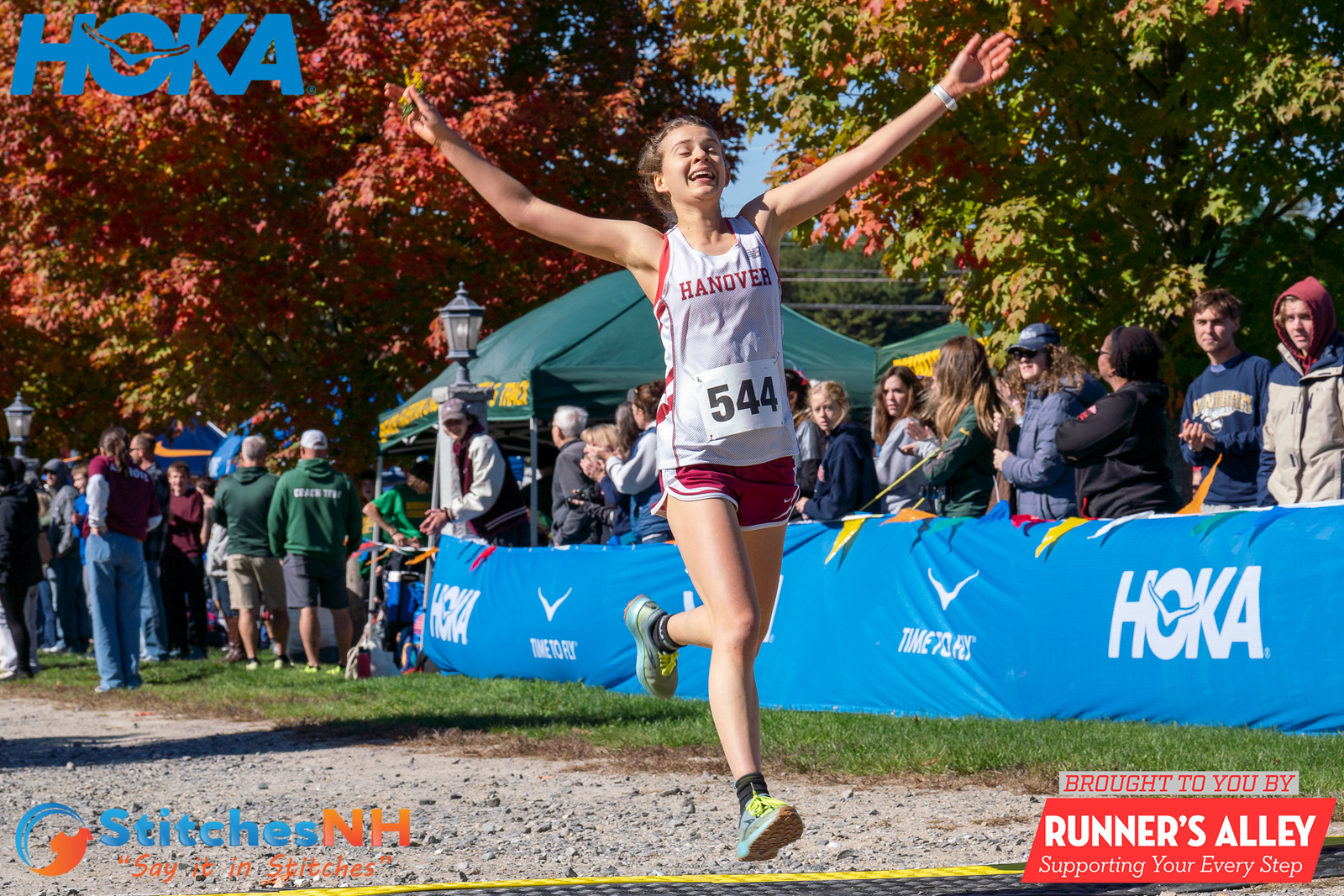 number, the teams making the trip certainly provided an extra flavor to the affair.  With the weather perfect for fall XC racing, and the course firmed up, thanks to the dedication of Alvirne’s coaching and maintenance staff, times were as fast as the competition fierce. Add in Lancer Timing’s new live results feature, along with NHCC and HOKA, the day was complete.

The Girls JV Race was certainly a harbinger of things to come as the Pinkerton Trail Blazers eeked out a 4 point victory over Winnacunnet.  Led by the sophomore 1-2 punch of Mia Eckerman and Sydney Sexton, Pinkerton scored just 39 points as they had their remaining scorers all in the top 26.  This was strong enough to hold off a Winnacunnet team which placed 4 in the top 11 with juniors Samantha Tetreault and Sofia Nardone leading the way in 6th and 7th.  Coe-Brown placed 3rd with 53 points.  Kudos to Hanover’s Lily Terry who not only won the race in 22:08, but said “hi” and thanked every one for cheering her on throughout the race!  We find this to be awesome!

On the Boys JV side, Nashua South demonstrated the most depth as they won comfortably with 37 points.  Led by race winner Camdon Brien (17:45), the Panthers placed 5 in the top 16.  Sophomores Joshua Mathson and Micah Allard placed 5th and 6th respectively to contribute to the cause.  The competition for 2nd and 3rd came down to a 1 point difference between the 2 public academies, Pinkerton and Coe-Brown.  While Coe-Brown placed 3 in the top ten with freshman Keegan Sousa (2nd, 18:08), Caleb Medina (4th, 18:17) and Sanjuth Nomula (7th, 18:27), Pinkerton packed their 2nd-5th scorers from 9th to 19th place all within 14 seconds of each other!  They were led by Logan McDonald’s 3rd place (18:09) and Spencer Pidhumey’s 9th place (18:36).

The Girls Varsity race was just as advertised both team wise and individually. True to form, Oyster River’s Mackenzie Cook and Haley Kavanagh took control of the race early with CBNA’s Sheldyn Fisher and Pinkerton’s Contessa Silva forming the pack with them.  The field can certainly thank the 2 Bobcats for their fast times as they pushed the pace through the 1st mile in 5:36 and continued to apply pressure over the first 2 miles of the course.  Hanover freshman Lea Perreard and Dover’s Isabel McIntyre also gave chase.  Cresting the hill past 2 miles and heading into the final 1200 meters or so, Cook, Fisher and Kavanagh had separated from the field and with about 800 to go, Fisher made the decisive move.  She ultimately crossed in a blazing 18:24 to Cook’s 18:32 and Kavanagh’s 18:34.  Silva would hang on for 4th in 18:45 to Perreard’s 18:59.  McIntyre’s crossed in 5th with a 19:36 clocking. Salem’s Lily Thomas would be 6th, just a few seconds up on Winnacunnet’s Charlotte Koutalidis and Pinkerton’s Isabelle Groulx.  Dover’s Alyson Bortz rounded out the top 10 individuals crossing in 19:55. 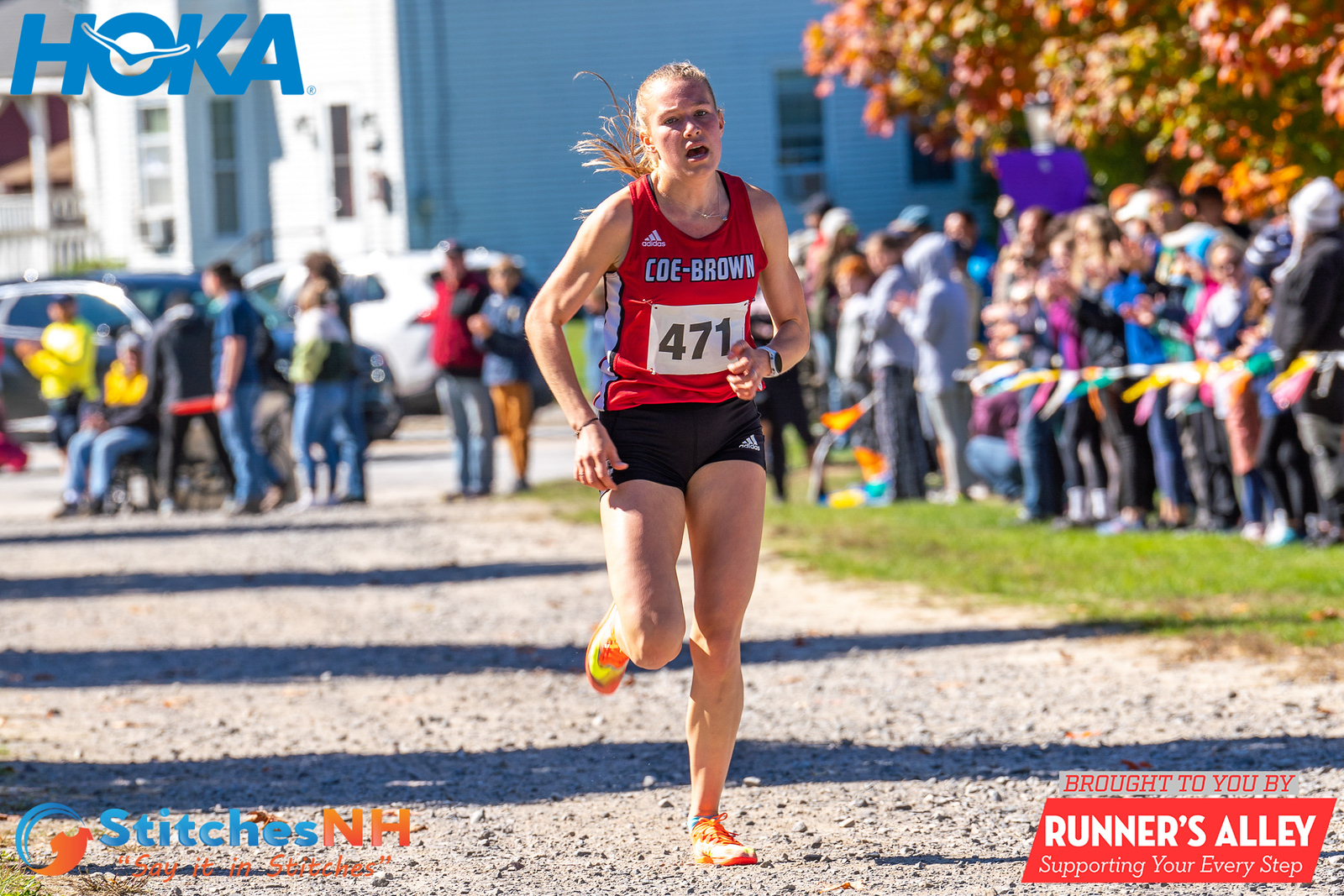 In a surprise of sorts, and led by Silva and Groulx, along with freshmen Gabrielle Bedard (20:29) and Sarah Rzasa (20:30) placing 16th and 17th, the ladies representing Pinkerton completed the JV/Varsity team sweep scoring 75 points, just 3 better than second place.  Led by McIntyre and Bortz, the Dover Green Wave would score 78 points for 2nd.  Watch out for Winnacunnet the second half of this season as they placed 3rd with 108 points edging top D2 team Hanover by just 2 points.  Hanover pulled off the other team surprise as they were led by 4 freshman!!!  Watch for them in the future and learn the names of Lila Muirhead, Matilda Monroe, Megan Faris and the aforementioned Perreard.  Oyster River would round out the top 5. 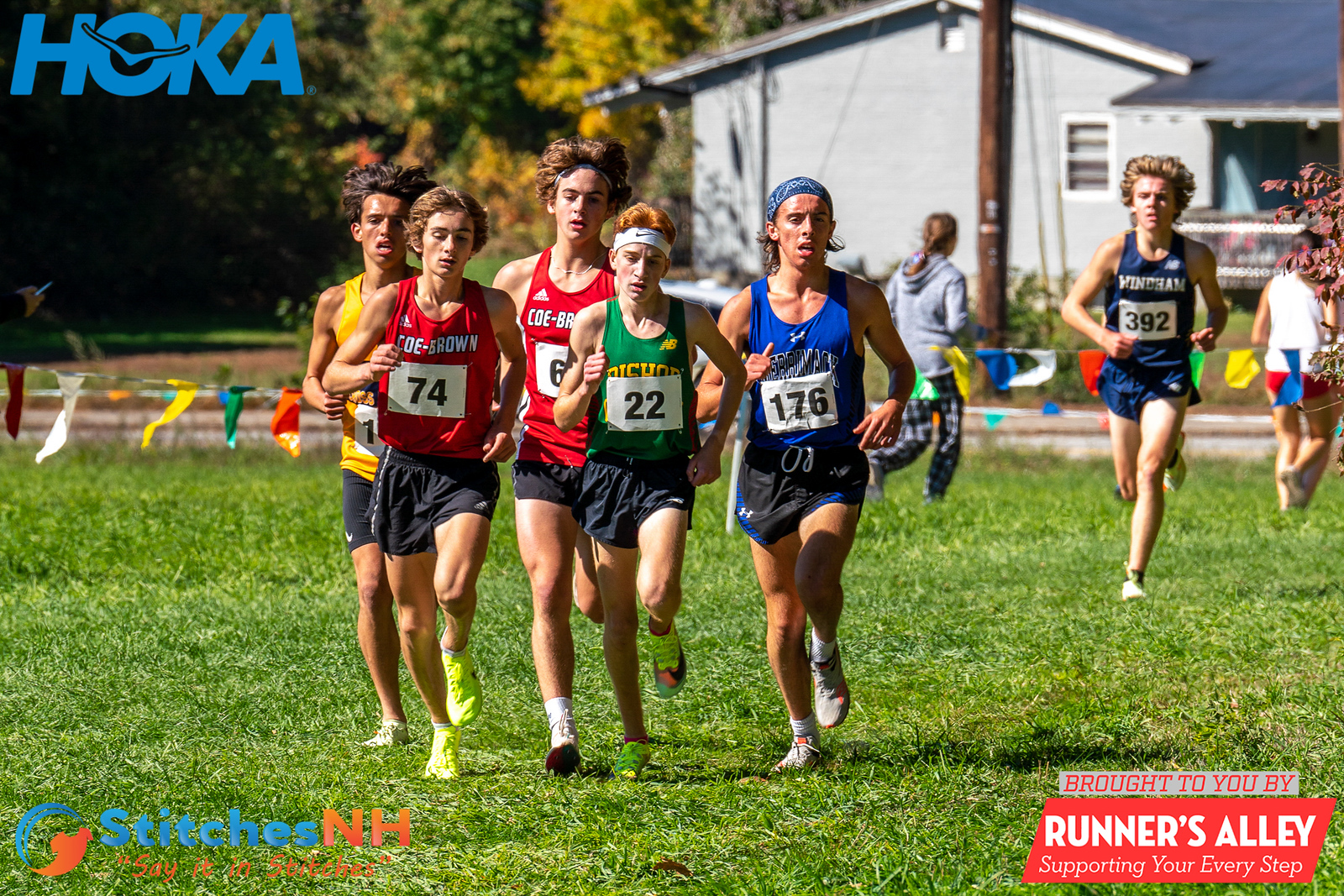 The boys varsity race went more true to form as Coe-Brown’s Aidan Cox put up his best performance of the season maintaining a sub 4:40 pace to break the proverbial tape in a record shattering 14:32.  While Cox was rolling over the course, the real race was materializing behind him as Bishop Guertin’s Matt Giardina, Greater Lowell Tech’s Devin Moreau, Merrimack’s Cameron Fredette as well as CBNA’s Tyler Tkaczyk and Jamie Lano all did battle.  By the time the pack rolled through 2 miles and up the grind of the one hill, the pack had whittled down to Giardina, Moreau, Tkaczyk and Lano.  Over the final mile, Tkaczyk was able to counter Giardina’s masterful downhill running to gain a 3 second cushion to cross 2nd in 15:46.  Giardina got nipped at the line by a hard charging Moreau as they both were clocked in 15:49.  Lano was the next under 16 in 5th at 15:56.  Fredette would be comfortably 6th in 16:05 while Windham’s Logan Carter had a nice bounce back race placing 7th in 16:16.  Oyster River’s Chris Jernigan got after it placing 8th in 16:22 just ahead of host school Alvirne’s Nick Marcotte.  South’s Daniel Byrne would round out the top 10 crossing in 16:27.

take the comfortable win with 53 points.  The real battle was for 2nd, but the Long Red Line saw a return as Pinkerton scored 117 points to South’s 138.  Pinkerton had just a 45 second 1-5 gap to South’s 1:12.  Pinkerton didn’t start their scoring until Finn Christensen-Kraft at 17th and 16:43, but Nathan Bind and Theo Davis packed right in just a few seconds later.  South was led by Daniel Byrne’s 10th place finish and he was quickly supported by his brother Andrew and Clifford Teixeira as they finished 23rd and 22nd.  Continuing to improve, Windham stuck their nose once again into the D1 conversation as they were just 9 points behind South, with a 1:25 pack time.  Defending champs Bishop Guertin was 5th.  D1s is up for grabs everyone.  No team has been able to consistently lay claim to the favorite title.