NH Meet of Champions!  18 teams competing for 6 spots going to New Englands at Ponaganset, RI next Saturday.  The most direct piece of data we use for this has to be the merges from last weekend.  But these are from the Division State Championships, a very different meet on a very different course.  Division meets are intimate, careful but intense races, while MOCs are a frenzy of competition.  Derryfield is one of the hilliest courses in New England, while Alvirne, this year’s site for Meet of Champions, is one of the fastest.  So, take what the merges say with a grain of salt.

We are certainly hoping to see a close meet demonstrated in the merges from last week as Pinkerton, Bedford and Hanover seem to be separated by 6 points.  As we know, Pinkerton and Bedford traded off

places for the most part last week. Sprinkle in a little Hanover, and we are in for a treat. This will be a faceoff between 3 teams which are great examples of “teams” as none of the 3 have a true low-stick, someone who can win the entire race.  Rather, these teams have packs!  The best 1-5 pack times in the state ranging from Bedford at 1:27 to Pinkerton at 1:29 to Hanover at 1:33.  It will truly be how the Contessa Silva-led Pinkerton, Lea Perreard-led Hanover, and Fiona Lee-led Bedford places shake-out and as we say, the simple math! Needless to say, all three of these teams should safely qualify for New Englands.

It continues to be interesting after these teams as Oyster River, led by Haley Kavanagh and Mackenzie Cook and Winnacunnet, led by D1 Champ, Charlotte Koutalidis are a statistical dead heat.   They will be chased by Keene and D3 champs Hopkinton.  One of these four teams, which are all VERY good, will be staying home for New Englands. If any of these teams seem to falter, look for Susannah Zahn’s Bow and the Dover Green Wave to take a shot at the top 6! 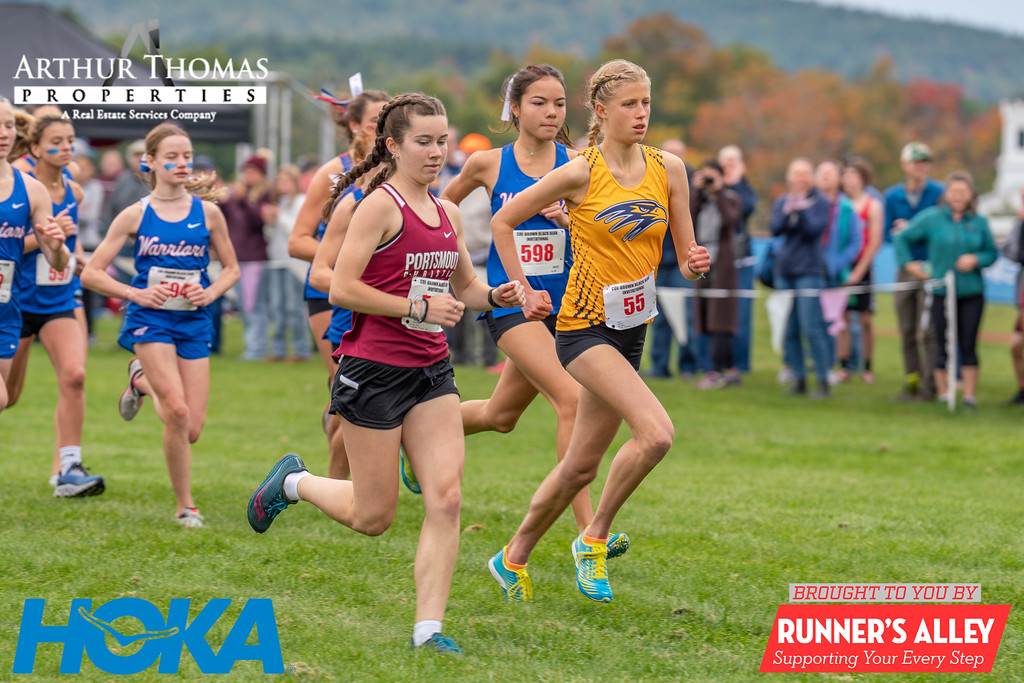 Individually, we should be in for quite the show!  Yes the merge seems to be D2 top heavy with Zahn, Kavanagh and Cook ranked 1-3 as well as Coe-Brown’s Sheldyn Fisher sitting at 5th and D1 Champ Koutalidis will make her presence felt for sure.  But one truly has to feel D3 Champ Brianna Malone simply cruised to the win last week.  She did beat Zahn head to head at Black Bear a month ago.  She has to be the favorite as she is the defending champion with the best finish in the state.  Can you remember a time, ever, when Malone was outkicked?  We would not be surprised if Zahn and Malone duel for the entire race.  Then Kavanagh, Cooke, Koutalidis, Fisher, and Perreard.  The next pack should have Silva, Lee, Plymouth’s Addison Englund, Exeter’s Meadow Gregory, Portsmouth’s Mia Scherr and Keene’s Reagan Hoy.

On paper, the boys team race looks like an easy win for Coe-Brown as they sit with 67 points and Pinkerton has 143 on the merge from Divisions. However, with questions regarding Aidan Cox, does Coe-Brown have enough to still win or at least qualify for New Englands.  The meet would obviously be much much closer, but Cox could just tempo and solidify the win.  Let’s remember, this is Coe-Brown.  With Tyler Tkaczyk, Jamie Lano, and Nikhil Chavda, CBNA can still put 3 in front of Pinkerton, Souhegan and Windham’s first.  Look for Gavin Demas to continue to progress.  Don’t be surprised if he is closer to Chavda.

At the same time, Pinkerton, the D1 Champs, had a 21 second pack time!  If Finn Christensen-Kraft can finish further up,  and pull the rest of the Long Red Line, Pinkerton can see themselves at the top as well. Souhegan was D2 runner up by virtue of their comparable pack time of 28 seconds and are led by Taloosh Anderson.  Windham was a bit of a surprise at Division 1s, they should not be overlooked again! They are led by Logan Carter. Expect Nashua South to rebound this week.  Led by Daniel Byrne, they will be even more comfortable at Alvirne, not quite Mines Falls, but in the neighborhood.

Then the battle should begin for the coveted 6th spot.  Perhaps a more rested Concord team will be able to hang on to 6th; however Exeter could improve this week if they continue to get healthier. And one should ever sleep on Bishop Guertin, which is just 13 points behind Concord on the merge.  They also made the trip to Battle of the Border and know the course well.  Expect Matt Giardina and company to capitalize on this.  Other teams within striking distance of the 6th spot are Winnacunnet, Hanover, and Lebanon.

Individually, with Cox possibly being in subpar form, this could open up quite the individual battle.  Both Patrick Gandini (Gilford) and Birhanu Harriman (Lebanon) won their respective Division State Titles last weekend by a large cushion.  Both could not have drained all their energy stores.  These 2 have raced each other a couple times this season, especially early on, and as their times indicate, are very close.  We are calling this a toss up at this point between these two. Neither made the trip to Battle of the Border

earlier this year.  Both are great on hills, but this is a fast, flatter course.  Both have great 3200m times from last spring.  This will be good.

The chase pack will be full and likely will be led by Giardina, Londonderry’s Ryan Fortin and Sean Clegg, Keene’s Sullivan Sturtz, Leb’s Thomas Wolfe, Bedford’s Jacob Redman, South’s Byrne, and Coe-Brown’s Tkaczyk and Lano.  While Giardina has the fastest time of this lot and battled with Fortin the entire race last week, remember Tkaczyk and Lano have traded punches (friendly) with Gardina at Black Bear and Battle this year.  However, all the above mentioned will be factors and will make this quite the fast affair.  Don’t be surprised ot see OR’s Chris Jernigan and PCA’s Jonas Teeter in that pack early either.

All in all – the MOCs annually is one of the best pure cross country races on the calendar for both team and individual competition! And with temps unseasonably warm, expect more fireworks.  Good luck to all!  NHCC will be there in force!