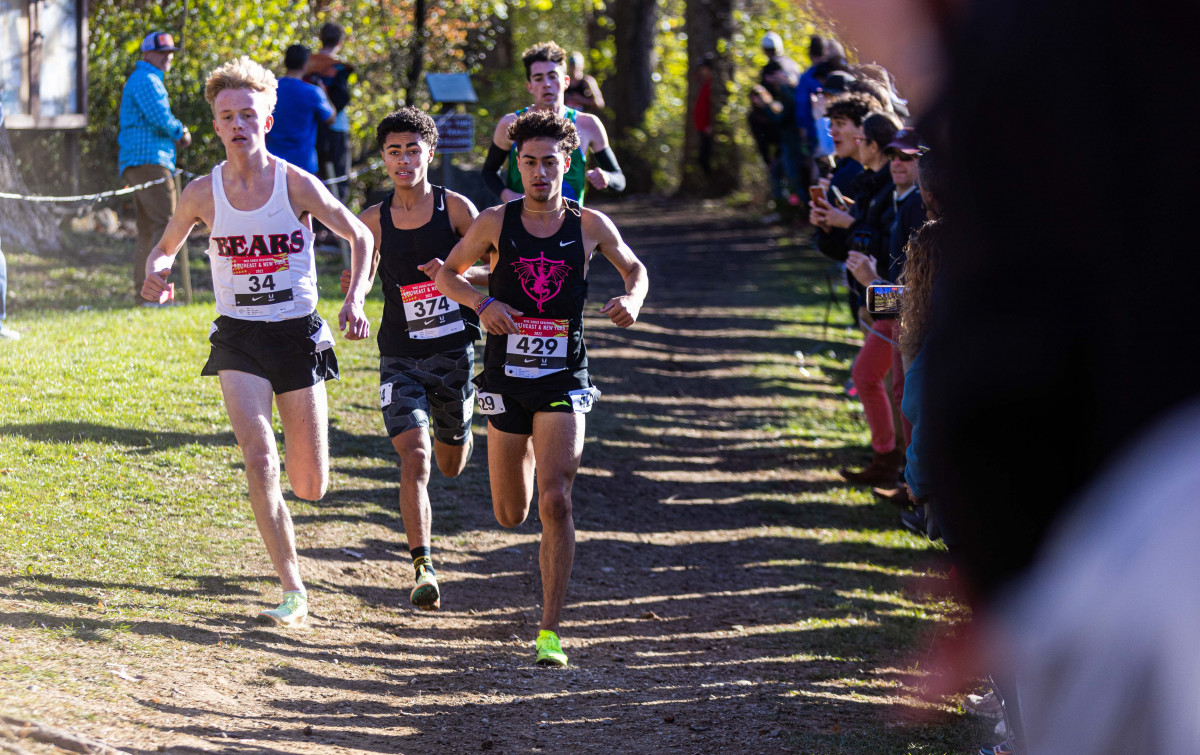 Congratulations to Coe-Brown’s Aidan Cox and Gilford’s Patrick Gandini as they qualified for the in Portland, Oregon by virtue of their 3rd and 5th place finishes at the Nike Cross Northeast Regionals yesterday at Bowdoin Park in NY.  Lebanon’s Birhanu Harriman placed 7th (1st Team All-Northeast) , and even though 2nd place Phillips Exeter’s Byron Grevious is from Connecticut, he goes to school in NH and is coached by Nottingham NH’s Brandon Newbould, so we are claiming him as well!  This gives the Granite State 4 in the top 7, crowding the podium!!! 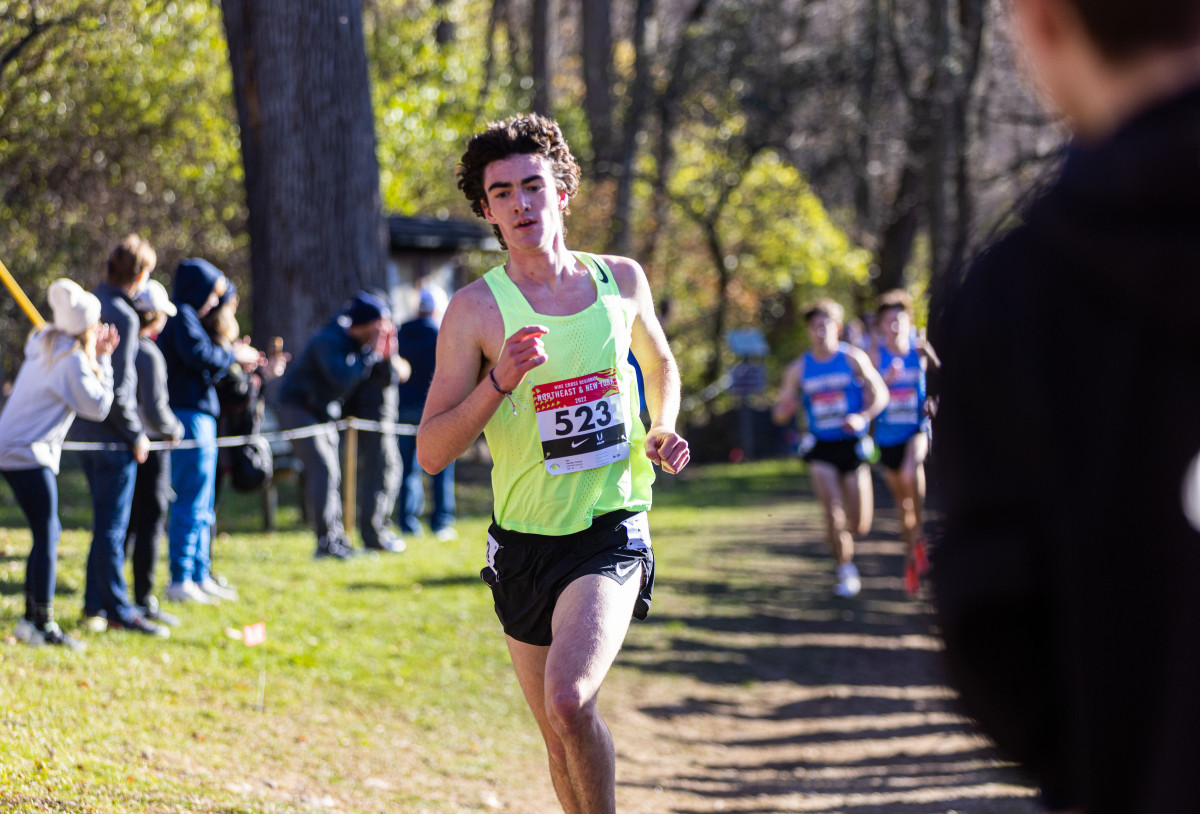 front pack by the mile.  Gandini was hanging in the top 10 at this point and Harriman working his way up through the field.  Cox measured the hill climb well preferring to have the other 3 do the work.  He descended well taking the lead by 2 miles and the pack was down to a total of 3 with Kipyego and Grevious not giving an inch.  Entering the final 800 meters or so, Kipyego made a move which Cox covered and then countered.  This gapped Grevious but not by much.  Kipyego then made another move with about 500 to go which Cox also covered but was barely hanging on.  Kipyego would finally pull away up the final hill with about 300 to go to win in 15:34.  Grevious would hang in there and overtake Cox in the final stretch to placed 2nd in 15:36 to Cox’s 15:38. Ross was 4th in 15:52. While this was occurring Gandini glided his way to the 5th position, but had to employ his best kick to hold off 6th place finisher VT’s Matthew Servin to claim the final qualifying spot at 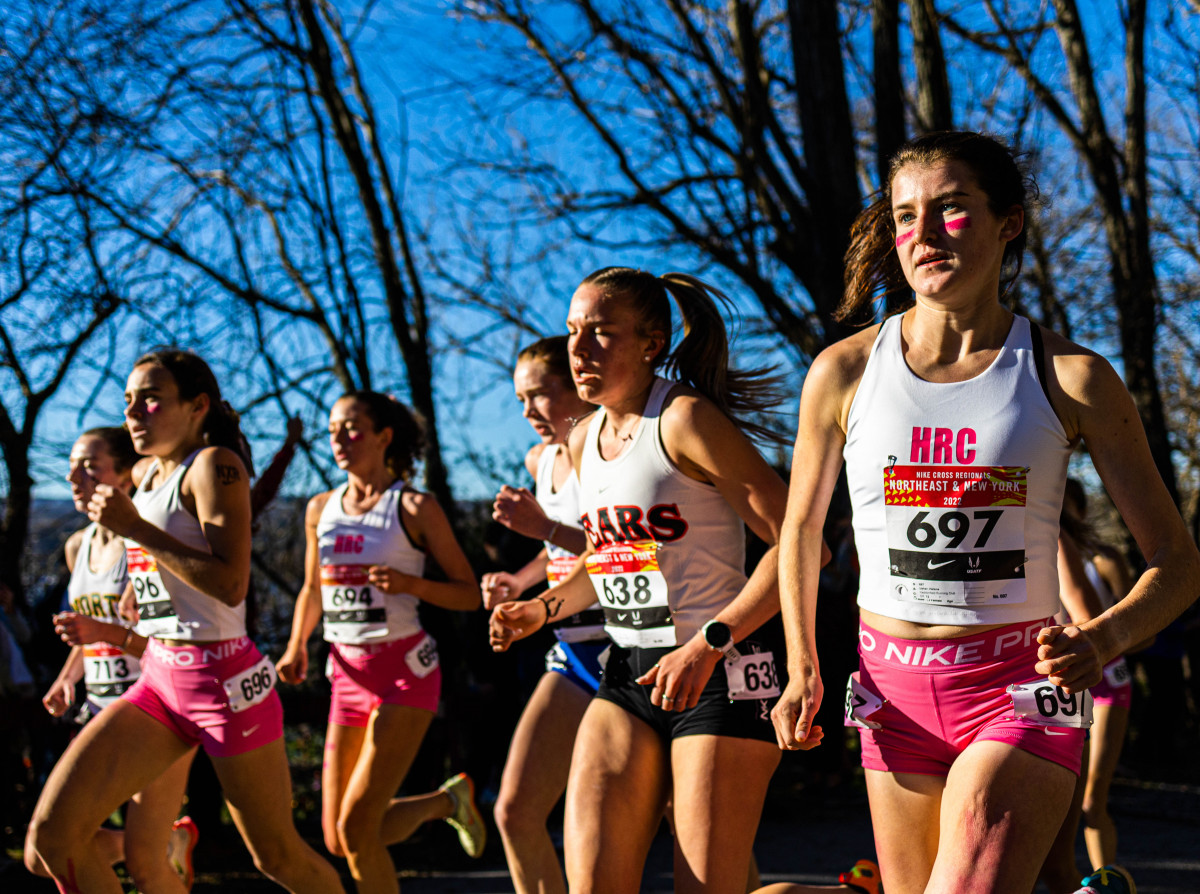 On the girls side, Coe-Brown’s Sheldyn Fisher placed a gutsy 16th overall in the Girls Championship Race to make All-Northeast.  Fisher crossed the 1st mile in 30th and was one of the few runners to negative split the challenging course.   Bedford, running as Bulldogs and Souhegan, racing as Sabers, placed 9th and 10th respectively. One thought on “COX, GANDINI MAKE NIKE CROSS NATIONALS in OREGON! NH – 4 in the top 7!”